In its Shopping Evolution Report released on New Year’s Day, eBay embarks on a data journey of customers’ sales histories since 2000, or Y2K as it was then known.

Twenty years ago, Pokéman was dominating theater and TV screens and GameBoy devices. Pokéman cards and plush toys were hot sellers and continue to do brisk business today with rare cards capturing thousands of dollars on the auction site.

Technology sales grew in 2001 and 2002, with the introductions of XBox and iPod in 2001, followed by cell phone cameras in 2002 from Nokia. By 2010, eBay shoppers were searching and shopping for tablets as the iPad debuted.

In 2003, Us Magazine and eBay shoppers were fixated on Paris Hilton and her Juicy Couture velour tracksuits. The socialite/reality star and Hollywood friends were photographed wearing the LA-icon uniform of brightly colored matching tracksuits to the airport and the clubs.

The brand is making a comeback on the site, as Gucci, Chanel and other top labels are incorporating athleticwear into their lines.

In 2004, people snapped up "Friends" merchandise as the series was wrapping up. Merchandise sales spiked 44 percent in September, coinciding with the show’s 25th anniversary.

"The Simpsons" in 2007 and "The Jersey Shore" in 2009 had big moments in pop culture and on eBay with respective sales of related merchandise.

The James Bond movie, "Skyfall" is cited as one of the reasons all things British sold well in 2012. The London Olympics, boy band One Direction and a reboot of the Spice Girls that year also helped propel sales of Union Jack-themed clothing and home-decor. 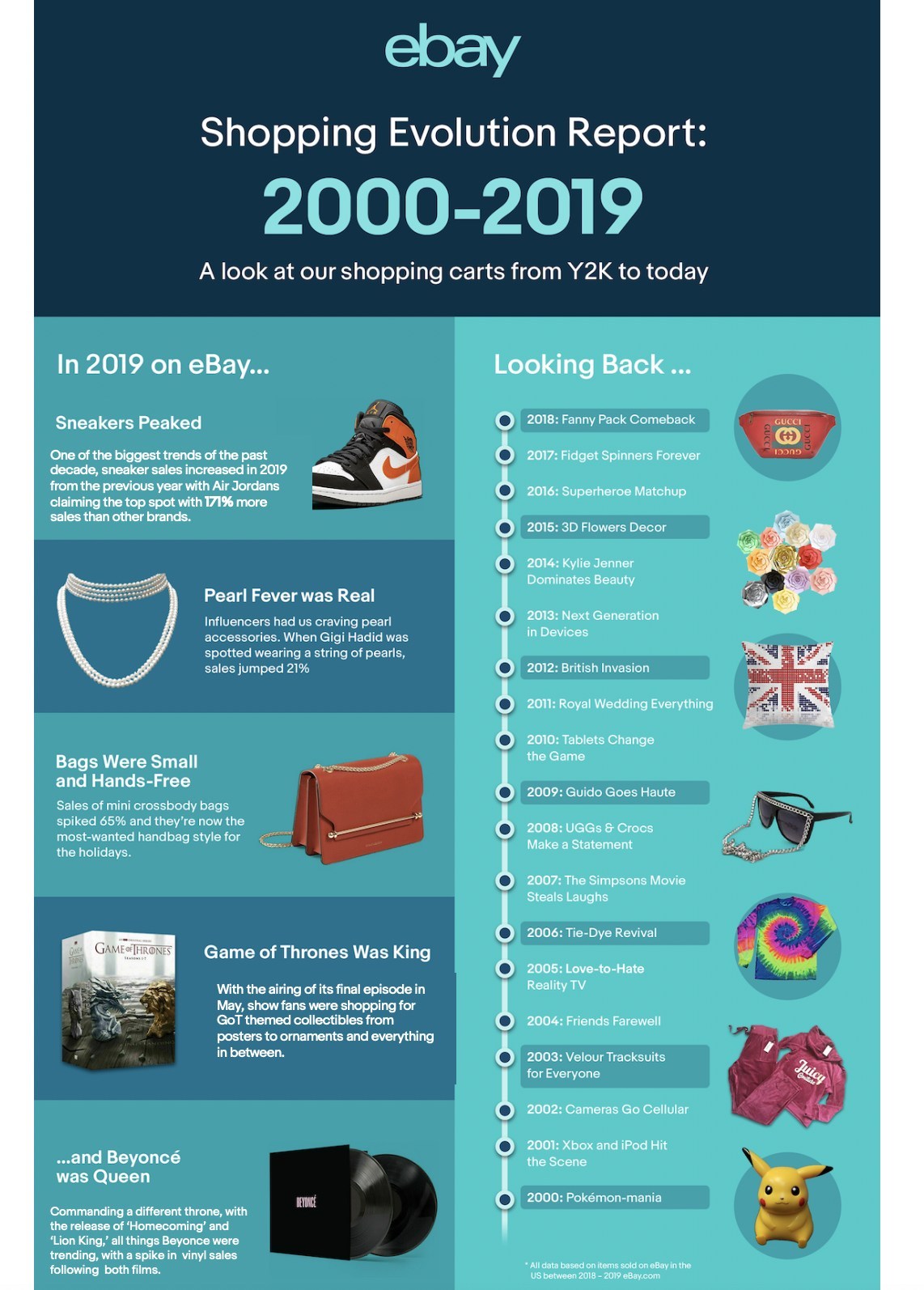 The year before, the tea sets had their day, coinciding with the wedding of Prince William and Kate Middleton.

A new category was born in social media and on eBay in 2014 with the advent of the Kylie Jenner lip kit. The age of the beauty influencer took off. As limited edition makeup kits by Jenner resold for profit on eBay.

In 2019, sneakers were among the top sellers on eBay. In fact, a superstar player from the 1980s and 1990s continues to dominate mainstream sales and eBay resales.

Air Jordans topped all sneaker resales on eBay with 171 percent more sales than other brands on the site.

Michael Jordan-related merchandise topped another list by eBay as the most expensive items sold in 2019.

A 1997 Metal Universe Precious Metal Gems trading card sold for $350,100 on the site, making it the third most expensive item behind a benefit dinner with investor Warren Buffet and—bringing us back to the year 2000—a Tom Brady autographed playing card from Y2K.

5 ways for advertising creatives to keep their sanity

From fashion to football, 'It's Happening' on eBay