A year ago, writers were scrambling to compile lists of the best Super Bowl commercials of all time: Coca-Cola "Mean Joe Green," Apple "1984," Volkswagen "The Force." But according to a new study, those lists don’t need to be updated just yet. The crop of ads that ran during Super Bowl 50 fell flat with audiences, lacked powerful emotions and weren’t funny, says a report from video distribution firm Unruly released Thursday.

"A lot of the ads didn’t pop from the clutter—they kind of blended together. They didn’t hit a diverse emotional makeup," said Devra Prywes, senior vice president of marketing and insight at Unruly. "The No. 1 problem with the ads in the last Super Bowl was that they didn’t hit emotions with intensity."

Unruly surveyed more than 16,000 adults about the emotions they experienced while watching the ads, complemented by facial recognition technology that read emotions while viewers watched. Overall, the 2016 ads ranked lower in eliciting emotions like happiness, pride, nostalgia and sadness than non-Super Bowl ads on the air around the same time. The only emotion experienced more often during the 2016 Super Bowl ads was hilarity, but only 10 percent of viewers described it as "intense."

"What’s funny is finicky and subjective," Prywes said. But advertisers shouldn’t be afraid to try to make viewers feel strong emotions. "It’s not a risky strategy to go after an emotional connection," she added, even if it turns off some consumers. 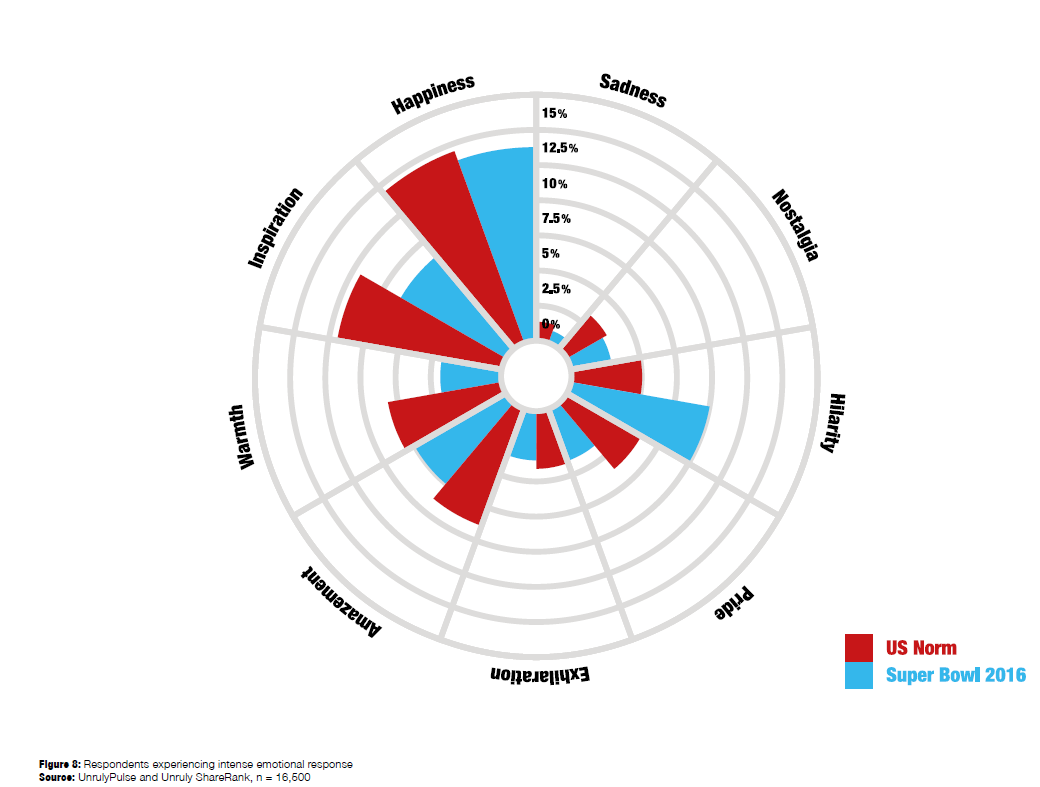 That’s the tactic used by Mountain Dew’s "PuppyMonkeyBaby," which was shared 358,138 times, placing it 7th among Super Bowl 50 spots. More than 1 in 5 viewers felt worse about the brand after watching the spot, particularly older viewers who registered high levels of confusion and disgust. But millennial males loved it—58 percent liked the brand more after watching the ad, and 65 percent said they would be very likely to recommend Mountain Dew. "The really funny stuff is polarizing," Prywes said. "If you are going to lean on humor, you need to be prepared to alienate a large part of the public."

In addition to a drop in shares, the 2016 ads weren’t memorable. Fifty-nine percent of respondents told Unruly they didn’t remember seeing any of the ads, including 55 percent of 18-to-24-year-olds and 47 percent of 25-to-34-year-olds.

But there are some lessons that can be gleaned from the lackluster year. Ads with music were shared much more widely than those without—70 percent of all shares were of videos with soundtracks.

Videos that premiered before the Big Game also performed much better. Of course, there’s more time for viewers to share those ads. The most shared ad of 2016—Doritos "Ultrasound"—debuted as part of the brand’s "Crash the Super Bowl" campaign in early January and racked up 87 percent of its 1,132,439 online shares before the Super Bowl even aired. That also left plenty of time for the brand affiliation to sink in—the spot had 93 percent brand recall, the highest of the year. 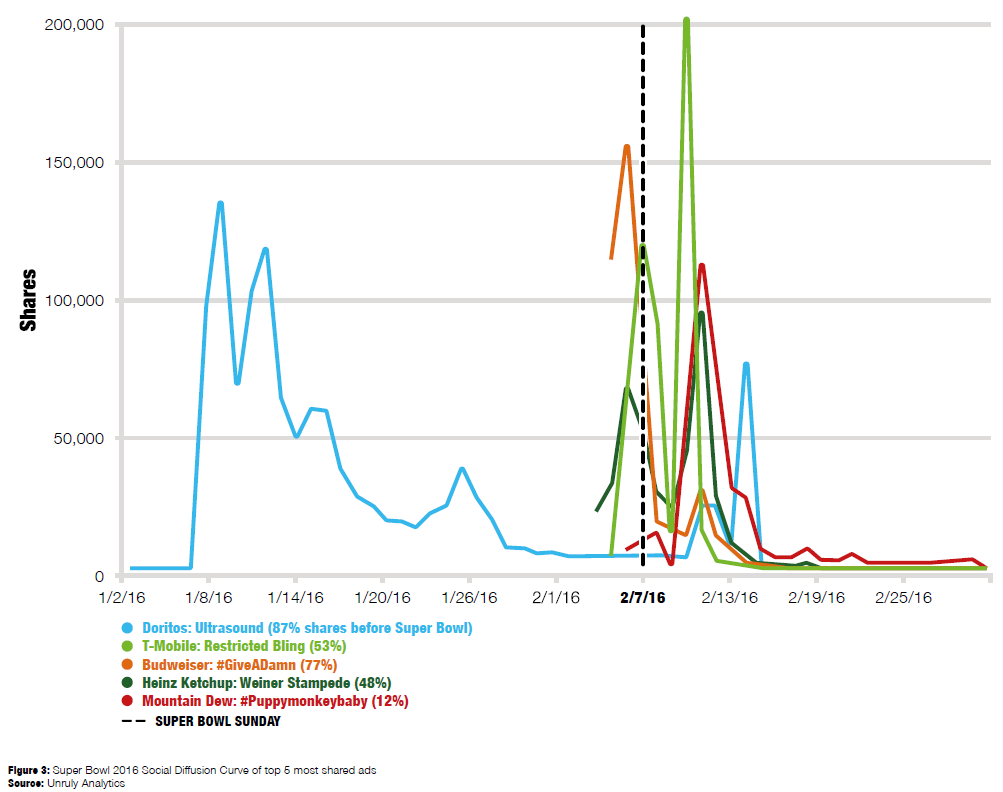 A longer shelf life can also make up for shortcomings in other areas, Prywes said. "It looks like audiences get a lot less forgiving once the Super Bowl airs. If you’re confident that you have a really strong ad and people are going to share it because it is just so compelling that they’re going to stop what they doing and share that ad, it’s a less risky strategy to wait. A lot of advertisers may not have that confidence, though."

Jeep’s "Portraits" spot took that approach, and emerged as one of the breakout spots of the game. But though it was lauded by viewers, it didn’t break the top 10 in online shares. Prywes recommends launching ads about a week before the Super Bowl. Earlier than that typically risks fatiguing audiences, as happened to Wix’s "King Fu Panda 3" tie-in. Teasers began running Jan. 13 to coincide with the movie’s release on Jan. 16. But even with one of the longest runs on the air, it didn’t break the top 10 in shares.

Whatever timing advertisers decide to use, they should remember that Game Day is actually a pretty distracting time for viewers, Prywes added. Efforts to engage them have a lot of competition, and not just from other brands. "On Super Bowl Sunday, they’re not sharing online," she said. "They’re sharing in real life."

Can Super Bowl success still change careers like it used to?

Fox rejects 84 Lumber's Super Bowl script because it's 'too political'