There is a sharp disconnect between polls indicating a Conservative victory and Labour's superlative social media performance, says We Are Social's research and insight director.

You’d be forgiven for finding the upcoming British general election hard to call. Traditionally, polling was widely trusted. But it has suffered a series of reputational hits in recent years, failing to forecast the 2015 UK general election, EU referendum and US presidential election results.

It is strange to witness the mainstream media’s continued reliance on polling for its main 2017 UK election narrative, starting with expectations of a Conservative landslide, to talk of a reduced majority, and now even a hung parliament.

Beyond polling, social media analysis can also serve as a way to anticipate public opinion. For example, when I wrote about Vote Leave and Donald Trump, I noted how both outperformed their opponents on social media: more fans/followers across Facebook, Instagram and Twitter, higher posting frequencies, and more fan engagement (e.g. likes, comments and shares).

Many didn’t just seem to like Leave and Trump, but actively cheered them on, despite (or perhaps because of) the mainstream media’s allegations of lies, corruption and personal immorality.

Extraordinary as it might sound, there are striking similarities between Labour, Vote Leave and Trump. Just as for the latter two, the widespread expectation is of a Labour defeat in the general election; the Conservatives may suffer setbacks, but will "of course" win. Most interestingly, there is a sharp disconnect between polls indicating a Conservative victory, and Labour’s superlative social media performance.

With just days to go until the election, Labour has gained 1.3m fans/followers on Facebook, Twitter and Instagram, versus just 848k for the Conservatives. Moreover, on Facebook, the largest platform for both parties, Labour has seen a 61% increase in followers since the election was called (from 540k to 868k), compared to just 6% for the Conservatives (from 564k to 596k).

Also, Labour talks more to its supporters on social media, with more than 30 posts a day in the last week across its social platforms combined (versus ten to 20 posts a day for the Conservatives).

And crucially, Labour gains a much higher level of user engagement: on Facebook. The party has attracted a daily average of 80-100k engagements in the last week, versus just 30-40k for the Conservatives. To be clear: this is not simply trolling: most reactions are likes or loves, and shares (a good proxy for active support) account for 30% of Labour’s total engagements (versus 19% for the Conservatives).

Of course, the Conservatives do gain strong levels of social media support in their own right. The party’s most successful posts are direct attacks on Jeremy Corbyn, Diane Abbott and John McDonnell, or Can’t lead. Can’t count. Can’t be trusted – as it called them on Facebook. 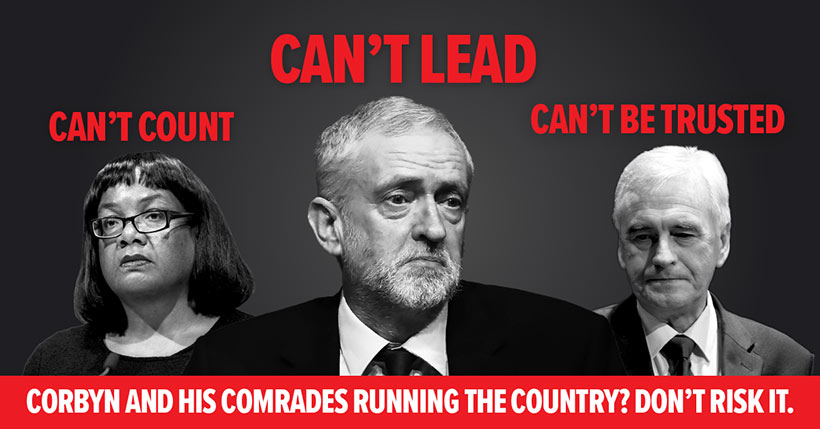 Strikingly, however, most Conservatives are in the background in this campaign, with Theresa May highlighted across most posts as the natural leader. She has her own social profiles, and her Instagram account (activated for this campaign) in particular features stylised photos of her and short clips of her statements.

In many ways, this election is the UK’s most presidential yet, even though there is no direct vote for May outside of her constituency.

However, Labour is simply much more successful on its social profiles. This is achieved with largely the same methods: it also uses an attack approach, as one of its most popular posts of the campaign denigrates Theresa May’s support for the return of fox hunting. And, like the Conservatives, it also relies to a large extent on its leader: Jeremy Corbyn has his own social profiles, with his content often shared by the party.

One of Corbyn’s most popular posts shows him as a young man in Kingston, Jamaica, where he taught for two years during voluntary service (although this post also attracted its fair share of trolling). A key difference is his use of humour, which the Conservatives steer clear of.

In Kingston, Jamaica - where I taught for two years during voluntary service. A time in my life that really shaped my politics. #TheOneShow #8DaysToGo

Above all, it should worry the Conservatives that Labour and Corbyn’s many social posts focused on the domestic agenda (jobs, the economy, the NHS) gain more engagements than their own posts about Brexit and national security.

So is it really that simple? Does Labour’s superlative use of social media and stronger user engagement indicate it is on track to win the general election?

Personally, I find it hard to believe, and one has to remember Labour attracts many young people, who might be very active on social, but are less likely to turn out to vote on the day. Also, its highly visible support ignores an often-noted aspect of Britain: "shy Tories" – less voluble, less willing to share their opinions, but who might yet give the Conservatives their much-expected landslide. And we cannot measure the impact of "dark social" – the efforts both parties put into individually targeted social media communications, but which many say has more media spend behind it from the Conservative side.

But maybe – although I wouldn’t bet the house on it – social media data is telling us a pretty clear story, and expectation will be confounded once again.