Slogan was initially shelved ahead of Britain’s first Covid-19 lockdown.

Fourteen months after pausing its “Finger lickin’” campaign, KFC has revived its beloved tagline for a campaign celebrating chicken fans across the British Isles.

Created by Mother, “Your chicken could never” begins as two friends enjoy some chicken on their sofa.

One satisfied foodie begins to lick their fingers as Barry White’s sensual anthem You’re the first, the last, my everything begins to play, prompting other KFC fans to give in to their spice-covered temptations.

While one man proposes to his partner in a chicken shop, a woman gets a questionable KFC tattoo and fashionistas create outfits entirely from KFC packaging.

The ad also makes reference to 2018’s "#ChickenCrisis", in which the brand ran out of chicken across a number of its UK stores, ending a declaration of love from the brand.

Several versions of the ad end with the “It’s finger lickin’ good” slogan, while another jokingly ends with the Pepsi Max logo.

The campaign launched today (11 May) across TV, radio and digital; while tongue-in-cheek outdoor activity shows fast food fans as they tuck into a piece of chicken, alongside the tagline “your chicken could never”.

The TV ad was directed by Rich Hall through Riff Raff, and media is handled by Mindshare.

“We wanted this campaign to celebrate each and every one of our fans,” Jack Hinchliffe, marketing director at KFC UK & Ireland, said.

“They have been unwavering and constantly show us their dedication in wonderful ways.

“We really do love you too.” 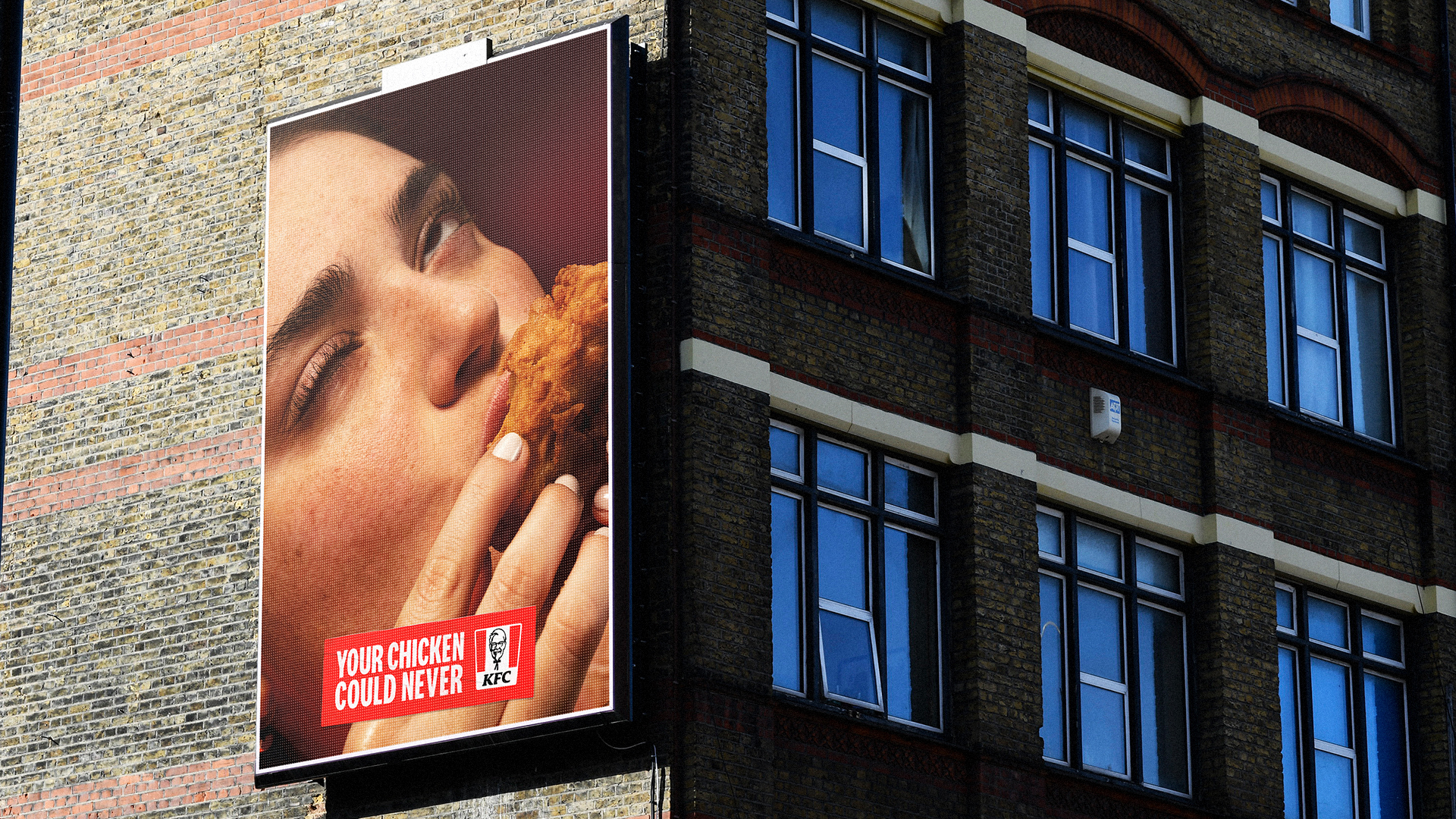 KFC initially shelved its tagline ahead of the UK’s first Covid-19 lockdown, at which time the brand paused an unfortunately timed campaign in which foodies were shown liberally sucking on their digits.

At the time, the Advertising Standards Authority received 163 complaints, leading a KFC spokesperson to declare: "It doesn’t feel like the right time to be airing this campaign.”

The brand more publicly stepped away from its tagline, however, with August’s “The world’s most inappropriate slogan”, which showed censored versions of KFC billboards and products throughout the decades.

KFC eventually endeavoured to try other brand slogans on for size, including “I’m lovin’ it”, “Just do it” and “Gives you wings”.

Hermeti Balarin, partner at Mother, added: “No other brand conjures up this level of adoration, so it was about time we compiled it all into one feel-good package.

Walkers to follow Lineker era with ‘humour with purpose’

KFC tries out other brands’ taglines for size