Art hit the streets of Saudi Arabia as Out-of-Home company Al Arabia launched what is billed as "the biggest art gallery ever seen in the Kingdom" on Dec. 22. The campaign, whose creative and digital legs were handled by JWT Riyadh, sought to find undiscovered artists in the Kingdom and bring their work to the people, through giant outdoor sites. The outdoor billboards were turned into framed pieces of art.

The campaign features work from 900 artists displayed on 3,000 sites across the country. The artists were invited to submit their work at alarabiaarts.com, which is now claimed to be the first and only listing of artists in Saudi Arabia. 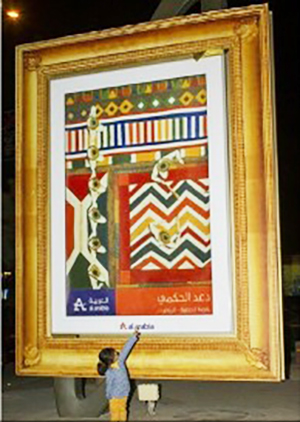 A note from Al Arabia explained the rationale behind the project: "Due to several factors in Saudi Arabia, it has been hard for the general public to appreciate more modern forms of art, and similarly, it has not been easy for many artists in the Kingdom to present their work to the public."

The artwork was installed on Dec. 19, followed by a teaser two days later. The campaign and installations were revealed at an event in Riyadh, with some of the artists also interacting with the public viewing the installations.

More pictures from the campaign can be viewed on an Instagram page.

This article first appeared on campaignme.com.

In Egypt, Axe celebrates 'the evolution of hooking up'

Can creativity blossom after Arab Spring?