The editor of the News UK title tells Gideon Spanier about agencies' bias against print, its biggest-ever ad campaign and its rivalry with the Telegraph.

John Witherow has been a newspaper editor for 22 years and "can’t think of any time" when there has been more news than in 2016. "For political stories and change, there’s been nothing like it," Witherow, editor of The Times since January 2013, declares. And "there’s more to come" with the US election.

What feels like a decade’s worth of news in a year has been good for The Times, where I worked before joining Campaign 12 months ago. Unlike many rivals, The Times has avoided deep editorial cuts and is reaping the benefit of subscription revenue from its £6-a-week internet paywall at a time when the print ad market is hurting. 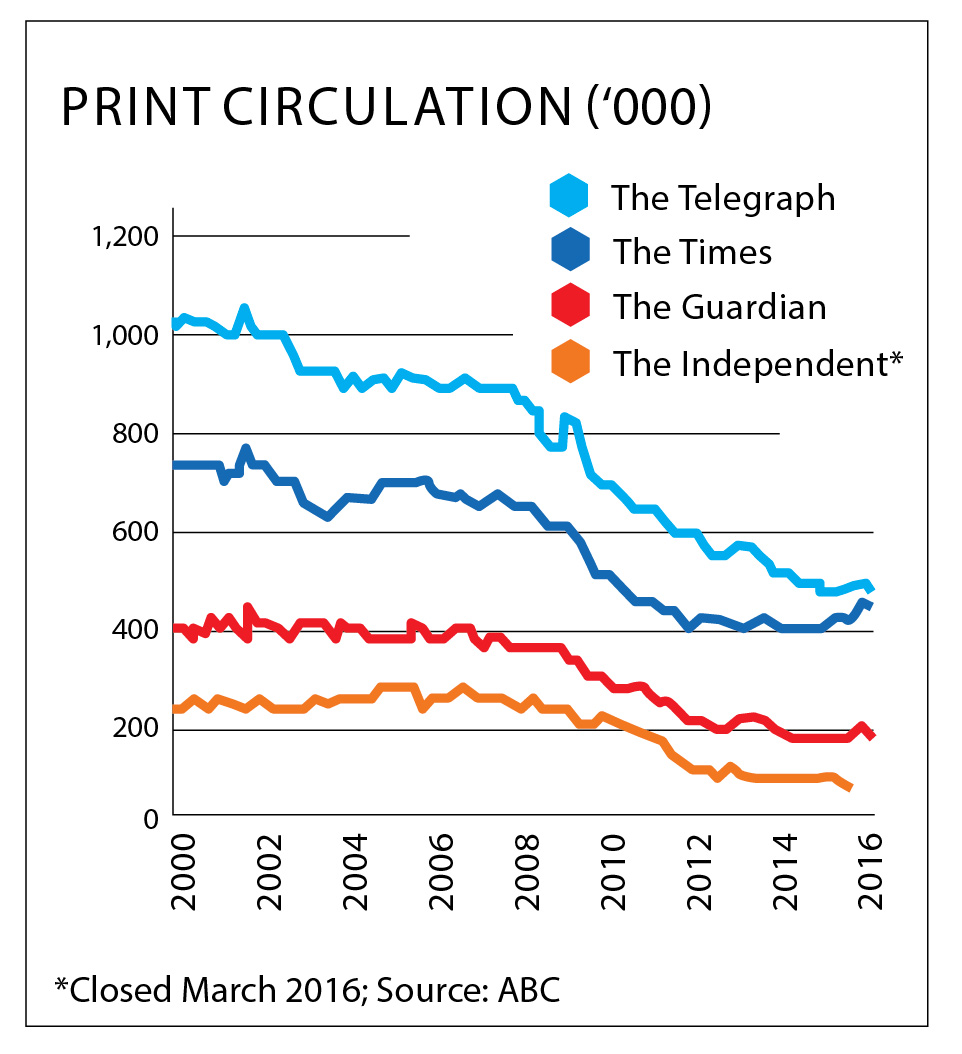 In Witherow’s first month as editor, The Times sold 399,000 copies in print and The Daily Telegraph 556,000. By last month, The Daily Telegraph had dropped to 463,000 and The Times had risen to 443,000 (albeit with more discounted copies at airports). "On one Friday, [the difference] came down to 1,000 copies," Witherow, a former war correspondent who covered the Falklands, says. And that was before the Telegraph hiked its coverprice to £1.60 while The Times held steady at £1.40.

Their rivalry goes back to 1993, when The Times began a bloody price war as it aimed to close the gap on the Telegraph, which was selling one million copies. Hostilities only ended in 2005.

Witherow claims "scores" of Telegraph readers (but "not huge amounts") have defected over Brexit because they preferred The Times’ measured support for Remain. His paper added 4,000-5,000 copies after The Independent shut its print edition in March, and The Guardian’s "shift towards the Corbyn camp" has helped, he adds.

"When you put our digital subscriptions together with the print, we probably comfortably exceed them," Witherow says of the Telegraph, although he can’t prove that. While The Times has 156,000 paying digital subscribers (up from 147,000 last year), the Telegraph won’t say how many have signed up for its softer, more advertiser-friendly paywall (the website has 97 million unique browsers a month). "The measure is still ‘can you exceed them in print?’ and that’s what we’d like to do," Witherow says.

When he moved from The Sunday Times, he had two main objectives. First, bring The Times back into profit, which happened last year when parent company Times Newspapers declared a pre-tax profit of £11m. Second, make it "the best-selling quality newspaper in the UK" on weekdays to match market leader The Sunday Times.

Witherow likes competition. Johnny Hornby, founder of The & Partnership and a frequent tennis companion, says: "He hates to lose a set. He is as competitive on the tennis court as he is in the office." Witherow has a reputation for being demanding – "sphinx-like", according to another editor – and
admits he is "obsessively hands-on". He chuckles: "It’s very unhealthy. Makes me dysfunctional." 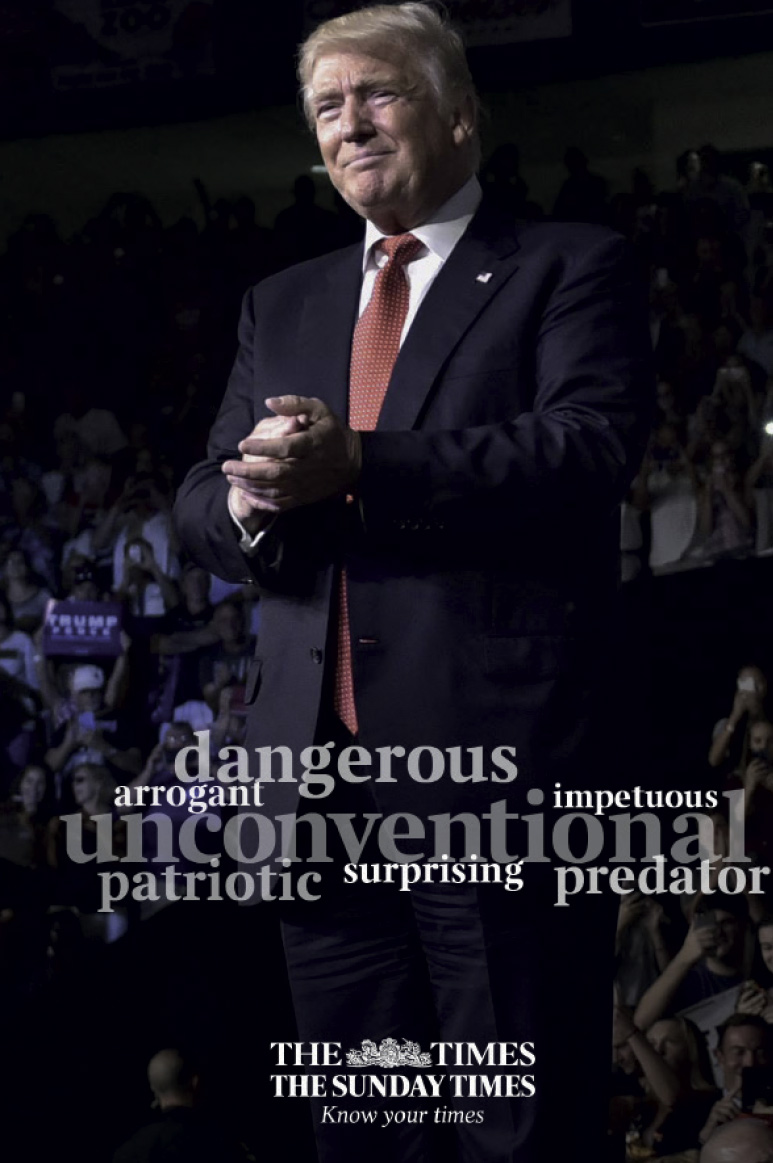 How much does overtaking the Telegraph motivate him? "A lot," Witherow says. "I’m sure the Telegraph, which is a fine newspaper, will fight hard so it’s not going to be easy." Last month, the Telegraph’s undercover scoop about Sam Allardyce forced the England football manager to resign.

The Times is upping the pressure with its "biggest-ever" ad campaign, created by in-house team Pulse Creative and The & Partnership. Called "Know your times", the ads promise that The Times and The Sunday Times can "cut through the noise" and make sense of the news whirl. The creative is regularly updated to keep it topical about newsmakers such as Donald Trump.

The insight behind the activity is that readers don’t look to The Times for breaking news when it is instantly available (but not always accurate) on social media and elsewhere. That is why the title moved to an "edition-based" online model, publishing at 9am, noon and 5pm, this year. Readers "don’t mind waiting" because they want things "in context" and "you make fewer mistakes", Witherow explains.

Critics say he is ceding territory to rivals. On the day before Witherow’s interview with Campaign, Ukip MEP Steven Woolfe collapsed in the morning and was briefly feared to be in a life-threatening condition, yet there was no news on The Times’ website until 5pm. "For big stories, we break the edition times," Witherow says.

He feels The Times and its owner, Rupert Murdoch’s News UK, have been vindicated by its paywall. Turning a profit has been "good for morale", Witherow says, as rivals such as The Guardian have run into trouble and Facebook gobbles up ad revenue. "The free model is under huge pressure. One of the great merits of the paywall is we have to invest in good journalists and the best journalism because people won’t pay for anything less," he continues. "If you’re a free site, you’ve got real complications. You’re churning out a lot of material and you’ve only got advertising to sustain you. So they’re cutting costs. It’s a vicious spiral, whereas we are in a virtuous circle."

The Times’ advertising has suffered despite circulation rising more than 12% year on year. Its print ad revenues have fallen for six years in a row from £86m in 2010 to £48m last year, according to Nielsen, which estimates they have dropped another 20% so far this year (a News UK source suggests that forecast is overblown).

"I like ads to be prominent in the paper. It maintains the stability of the finances"

"There does seem to be a bias against print," Witherow says. "A lot of them don’t seem to read newspapers in the ad agencies. I think they are mistaken and print will come back." The Times has sent Andrew Norfolk, the chief investigative reporter who exposed systemic child abuse in Rotherham, to talk to agencies such as the7stars and spread the message that, in Witherow’s words, newspapers "can change things – they can change the world".

Witherow approves The Times’ own advertising because he sees himself as "custodian" of the brand, although he hasn’t attended a focus group "for years". His favourite campaign is "The Sunday Times is the Sunday papers" by Arc Advertising from the early 1990s.

"I like ads to be prominent in the paper. It maintains the stability of the finances," he adds, noting pages two and three of the paper on the day of this interview were cleared for a Moncler ad. The Times is currently showing agencies a dummy edition with new ad "shapes" that Witherow admits might once have been considered "overwhelmingly intrusive".

Witherow has also revived luxury magazine Luxx because he does not want the Financial Times to get all the upmarket ads, thumping a copy of his rival’s How to Spend it on his desk.

Media agencies are receptive. "The Times is a different conversation from every other newspaper because its print circulation is rising," Chris Locke, managing director at Publicis Media Exchange, says. But he adds that "its paywall is always going to be a problem" for advertisers.

Witherow turns 65 next January but is full of gusto – like his "proprietor who is 20 years older and he too is fizzing with energy," he beams.

As he gazes out from his London Bridge office, things are looking "very volatile", from the recent sterling "flash crash" to the "horrible" abuse of immigrants and the crisis in Syria. Yet Witherow believes that plays to his paper’s strengths: "The Times can dominate the centre ground and give arguments to both sides. It’s a great area to be in." 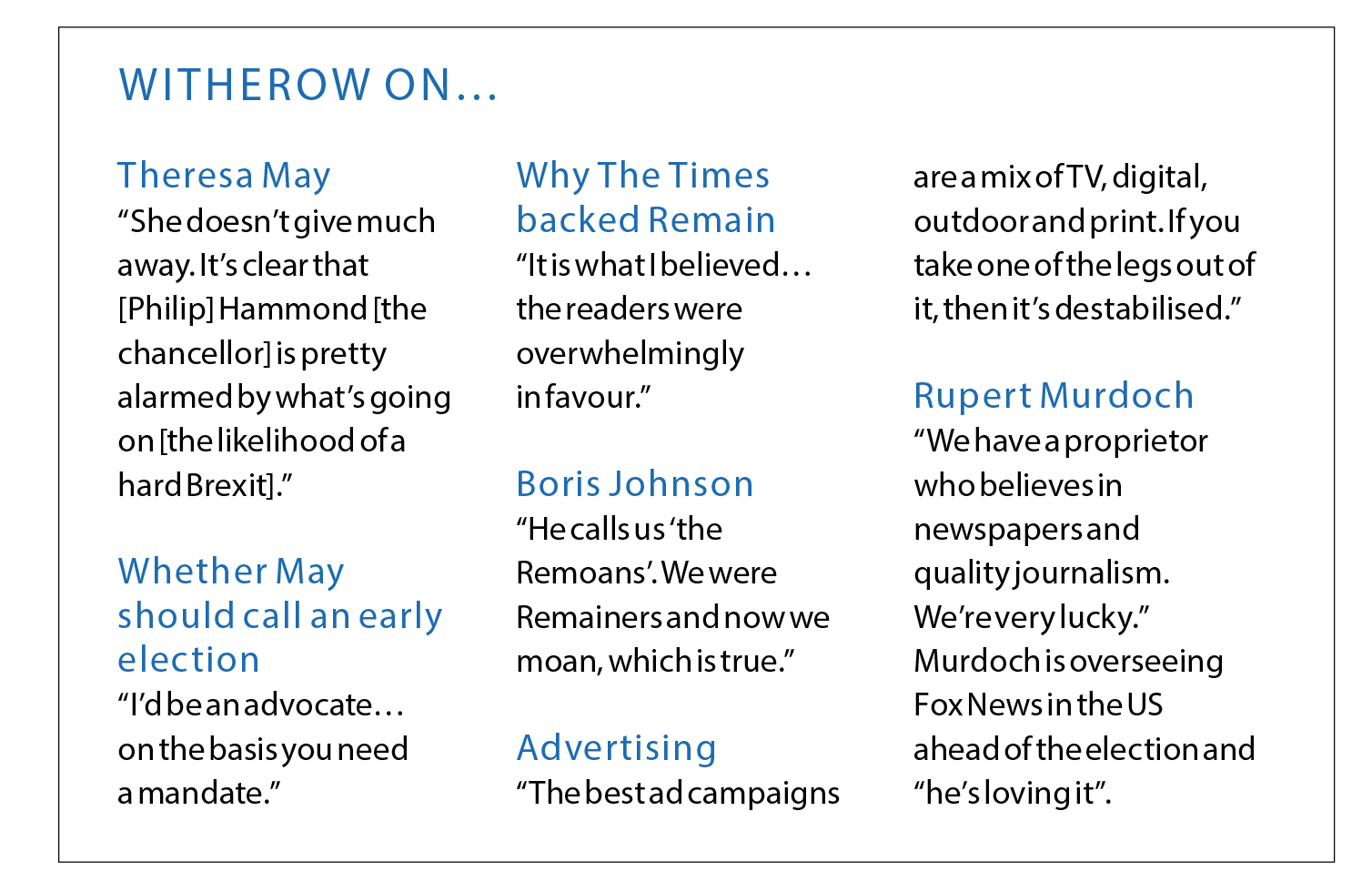 Advertisers need to remember the value of news

Newspaper sales jump up to 20% after Brexit vote drama