Brexit-led resignations from the Cabinet have brought the ad industry its fourth culture secretary within the space of two years, as unknown quantity Jeremy Wright takes over from Matt Hancock.

Last night Hancock was appointed health secretary, taking over from Jeremy Hunt, who was made foreign secretary after the resignation of Boris Johnson.

Prime Minister Theresa May's government was thrown into a state of crisis yesterday by the resignations of Johnson and Brexit secretary David Davis.

Jeremy Wright, who campaigned for the UK to remain in the European Union in 2016, arrives at the DCMS after four years as attorney general, the chief legal adviser to the government.

A qualified barrister, he first entered Parliament in 2005 and is MP for the West Midlands seat of Kenilworth and Southam. He also set up the all-party parliamentary group on dementia and chaired it until 2010. 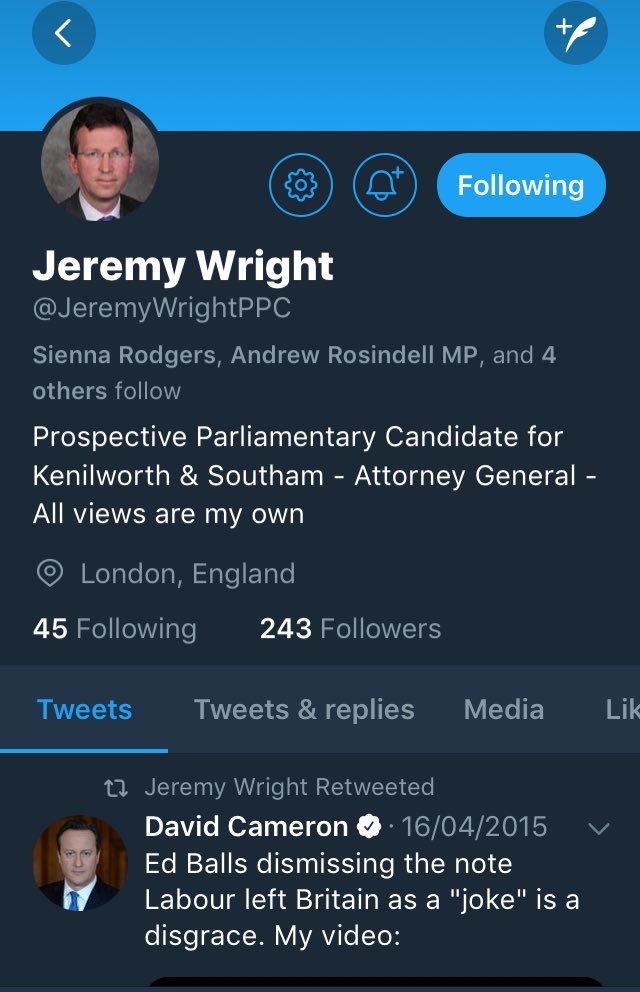 Unlike Hancock, he is not a habitual social media user and has not tweeted since April 2015 (as of when this story was published this morning, see picture, left).

However, he will need to get up to speed quickly with matters currently in the DCMS in-tray, including the acquisition of Sky by Fox, Channel 4’s partial move to the regions, and an independent review into the future of high-quality journalism.

Hancock gave Fox the go-ahead to buy Sky on the condition that it sells Sky News, but Fox is waiting for the DCMS to announce more details of how that process would work. According to weekend reports an announcement was likely this week, but that was before the reshuffle. A DCMS spokesman was today unable to confirm when the announcment would be made.

On this day in 2016, the culture secretary was John Whittingdale. He was despatched shortly afterwards by May in her first reshuffle after becoming Prime Minister in the wake of the Brexit referendum.

Whittingdale's successor Karen Bradley moved on after 18 months in January this year and was succeeded by Hancock, who was promoted from digital minister.

"We wish Matt Hancock well in his new role. He was a passionate advocate for our industry and its place in the economy.

"With serious issues facing our industry, from food advertising restrictions, media transparency and platform accountability to Brexit, where access to talent and data equivalency remain open questions, we look forward to continuing these conversations with Jeremy Wright.

"We welcome him to post and hope he provides consistency in the long-term."

Advertising Association chief executive Stephen Woodford also welcomed Wright and praised Hancock as having been "a real champion for our industry during his time at DCMS".

Woodford added: "Advertising is the second largest creative industry, and we look forward to working with Jeremy in his new role as co-chair of the Creative Industries Council to implement the Creative Industries Sector Deal. We also look forward to working with his Department to help tackle childhood obesity with regulatory framework for HFSS advertising that is evidence-based, proportionate and effects real change. Our industry is also actively playing a lead role in supporting the Government’s Industrial Strategy, by working to boost SME growth here in the UK and promoting the strengths of UK advertising around the world."

The lawman cometh: will Jeremy Wright be good for the advertising industry?

Govt suggests moving only part of Channel 4 outside London