Auto brands seek the inside track at the big show

NEW YORK — Auto brands including Jaguar and Toyota got consumers directly involved with the excitement of the New York International Auto Show weeks before launch day on April 1.

Automakers are revealing new cars every hour at the Javits Center on Wednesday, with videos, speeches and even dancers. Jaguar has been building buzz around the reveal of its new Jaguar XF and Range Rover SVAutobiography for two weeks.

On Tuesday, Jaguar debuted its 2016 XF in New York City’s Flatiron District with a display that made the vehicle appear as if it was floating. The presentation, which follows a stunt two weeks ago in London where the car drove across a river on steel cables, is meant to highlight that the vehicle is 300 pounds lighter than competitors.

Hit replay on yesterday's thrilling high-wire stunt on the Thames in London and sign up for future XF updates: http://bit.ly/1Nc8fi7

Stuart Schorr, VP of communications and public affairs at Jaguar Land Rover North America, said the objective was to get the public’s attention while media is busy with auto show events. The New York display, which will stand throughout Wednesday, is important because it’s an "image that helps tell our story," he added.

The brand also partnered with actress Christina Hendricks to launch the XF sedan. Hendricks’ character appeared in a Jaguar during a previous episode of Mad Men, which will begin airing the second half of its final season on Sunday night.

Jaguar filmed a short video of Tuesday’s event and posted it on its social channels. DKC, Jaguar’s PR agency partner, handled PR and event execution for the display.

Following the event, Jaguar will continue promoting its new vehicles with traditional media outreach and social media engagement, Schorr said. The company will invite 25 journalists to Spain in a few months to test drive the XF on a race track, as well as 75 additional journalists to drive it at an undetermined US location in October.

Toyota also began engaging consumers on Tuesday with the launch of Gifony, an interactive experience that highlights the sights and sounds of a Toyota vehicle being manufactured. The microsite invites consumers to get a sneak peek at the Toyota factory and create their own Gifony, or "symphony of GIFs," explained Zoe Zeigler, assistant manager of corporate marketing for Toyota.

Each GIF is accompanied by a sound from the assembly line, such as a car being painted or wheels being attached. Users can share their completed Gifony on social channels including Facebook, Twitter and SoundCloud.

To promote the effort, Toyota partnered with DJ SoNevable, who produced his own Gifony music video and will share it with fans on his YouTube page and other social platforms. The DJ debuted his track Wednesday night at an exclusive Toyota party in New York.

Zeigler said the Gifony site will live on after the auto show as a way to showcase behind-the-scenes stories of Toyota’s vehicles.

In addition to Gifony, Toyota is getting auto show attendees involved with its TeenDrive365 safety initiative through a distracted driving simulator. Using Oculus Rift technology, the simulator has participants virtually drive a vehicle while being faced with a deluge of distractions, such as loud passengers or text messages. 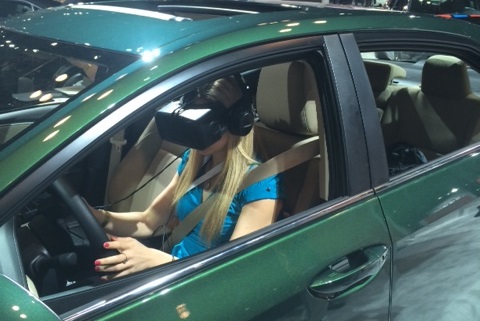 Marjorie Schussel, corporate marketing director at Toyota, said the in-person experience at the show helps the company stand out. She added that 80% of people who have tried the simulator said they will drive more safely going forward.

Toyota is also allowing attendees to test drive its Mirai fuel cell vehicle, which Shussel said is another great way to capture people’s attention and get them involved.

360i and Finsbury are working with Toyota on TeenDrive365 and Gifony.

In Sweden, Toyota ad hijacks Siri to switch off iPhones while driving