The publisher of the Daily Mail is considering a bid for Yahoo alongside private equity firms.

Daily Mail & General Trust has confirmed that a deal is being considered, albeit at an early stage, with a view to taking over Yahoo’s news and media assets, according to the AP news agency.

Such a deal would boost the publisher’s presence in the US, having launched news web site MailOnline there in 2012.

Verizon, the owner of AOL, is considered the favourite to buy the business, which has struggled of late after reporting a $4.36 billion (£3.09 billion) yearly loss for 2015.

Time Inc. is also reported to be considering a bid alongside a private equity firm.

Also in the news

Premiering in more than 20 markets, with AOL’s Be On platform as the exclusive syndication partner, the ‘Marriage Market Takeover’ video shines a light on China’s "Sheng Nu" – a term used to label unmarried women over the age of 25, which translates to "leftover women".

The spot captures the intense pressure placed upon women growing up within this culture, providing an insight into a life full of expectation for them to appease their parents by marrying early.

Featuring deeply personal interviews between women and their parents, the video’s raw approach generates an authentic and emotional response from viewers, as participants reveal the many ways in which this day-to-day pressure has an impact on their lives.

Aimed primarily at China, the US and APAC markets, SK-II tells a story that crosses regional boundaries, aiming to inspire women of all cultures to take control of their lives.

Jaguar Land Rover (JLR) could be going head-to-head with Uber after creating its own transport tech startup, InMotion.

The initiative, which will be run independently of its parent company, will develop apps and services aimed at delivering better travel and transport experiences.

While there are no confirmed details of what these will be, InMotion's site mentions potential services such as car sharing and on-demand delivery.

A range of cab hailing apps, such as Uber and Gett, have expanded beyond their original purpose into on-demand delivery, with Uber launching its UberRUSH quick delivery service late last year. 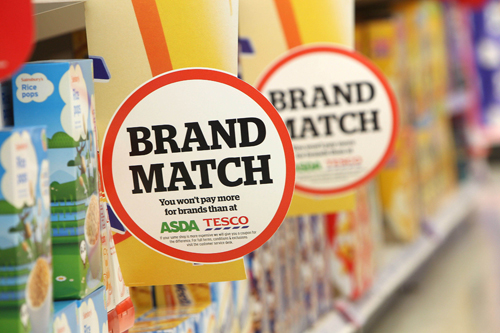 Tesco will allow customers to use their Sainsbury’s Brand Match vouchers in its supermarkets to get money off their shopping.

The move comes after Sainsbury’s announced it would halt the scheme in favour of wider price cuts on items.

Although the Sainsbury’s scheme doesn’t end until 26 April, Tesco will allow a swapover from today (11 April) until June.

Sainsbury’s Brand Match offers shoppers money back vouchers at the till if their shop would have been cheaper in Asda, usually the cheapest of the big four supermarkets – but only under certain conditions, like buying 10 items.

Marketing Society Leader of the Year: The nominees

Presenting the shortlist for The Marketing Society Marketing Leader of the Year 2016, in association with Marketing.

The winner, as voted for by readers of Marketing and members of The Marketing Society, will be announced at the Society's Excellence Awards on 15 June at The Artillery Garden, HAC. Read on and cast your vote by 5pm on 20 May.

Take a look at the shortlist here, The Marketing Society Leader of the Year 2016: The Nominees.

Viral review: Diesel teaches us to celebrate shortcomings with 'Go with the flaw'

Shell turns to Akon and tech to burnish green credentials

Tesla timeline: how the electric car company built a global brand without advertising

Media on Trial: the i