Broadcaster has taken extra £8m from commercial partnerships on this year's series.

ITV will run Love Island twice a year from 2020 after bringing in more ad sales than expected from the current series, including an extra £8m from commercial partnerships.

The new "winter" series of Love Island will be filmed in South Africa, whereas the existing summer one, which ends next week, is shot in Majorca, Spain.

The decision to commission a second series a year will be a boost to WPP’s Motion Content Group, which co-produces the show with ITV in the UK.

ITV reported that total advertising revenues fell 5% in the first six months of the year – marginally better than the drop of 6% forecast in May – against tough comparisons with the men’s football World Cup last year.

Dame Carolyn McCall, chief executive of ITV, said Love Island had "definitely" contributed to an "uptick" in ad sales on both linear and VoD channels that meant ITV ended June in a better-than-expected position.

She would not identify the value of ad sales from Love Island, which the broadcaster said was the UK's most-watched show for 16- to 34-year-olds in the first six months of the year, but she said it has taken an "incremental" £8m in revenue from commercial partnerships.

This money was not "spot" ad sales but partnerships such as a Love Island tie-up with make-up brand Fenty, McCall said. Other commercial partners include Uber Eats and I Saw It First.

ITV expects ad sales to be roughly flat in the third quarter – somewhere between 1% increase and 1% decline.

"It’s much harder to read what’s going to happen in each quarter," McCall said, partly because advertisers are "shifting" and "pausing" because of Brexit uncertainty, adding: "The fact it’s been prolonged has affected clients."

ITV this week said it would extend its suspension of late booking fees for another three months until the end of October.

Not all advertisers are behaving in the same way

ITV told investors that "the make-up of TV advertisers is changing as new categories and markets are being disrupted by insurgent brands".

This means "some categories are growing rapidly" while others, particularly "high-street, retail and FMCG" companies, are spending less.

Faster-growth categories included online, up 7% (excluding gaming firms because of the comparison with the 2018 football World Cup); publishing and broadcasting, up 10%; government, up 18%; and airlines and holidays, up 22%.

By contrast, entertainment and leisure were down 23% (partly because of the World Cup); cosmetic and toiletries fell 18%; and retail, the biggest category, fell 8%. 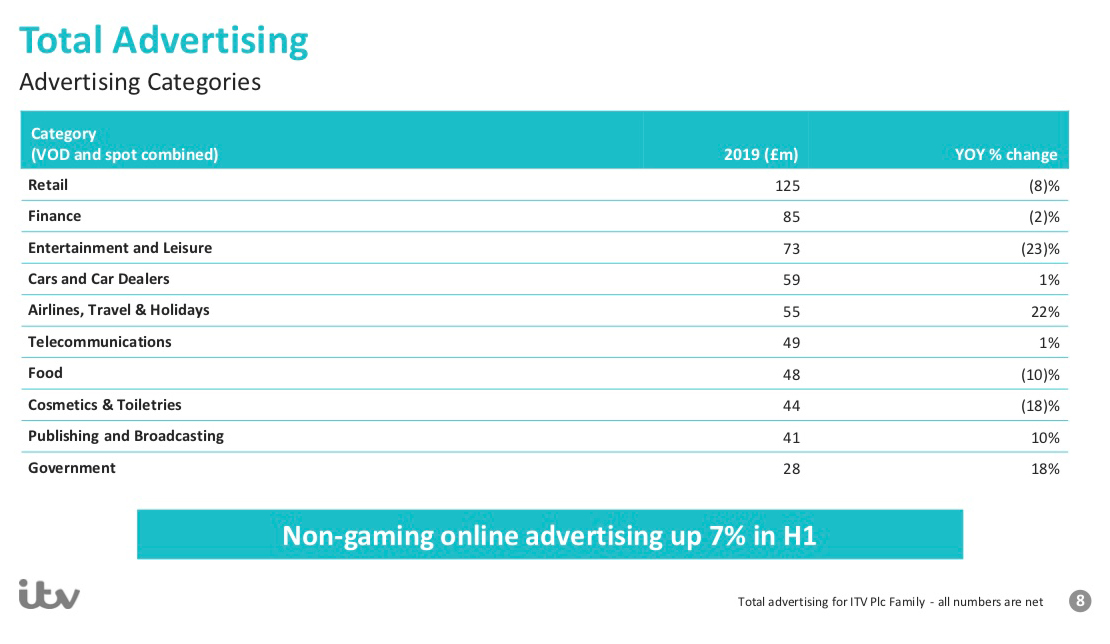 "Research has shown that digital is less effective than TV advertising, but it allows advertisers to gain short-term impact and benefit from low production costs," the company said, citing Ebiquity figures that show £1 invested in TV delivers a £4 return compared with online video advertising delivering a £2 return and online display delivering a £1 return.

Asked how ITV Hub fits into the internet landscape, McCall conceded that "digital" is a "wide term" but pointed out advertising on ITV’s own online platform is "brand safe", "in context" and "trusted" in the same way as broadcast TV.

ITV is investing in "highly targeted" and automated digital advertising on ITV Hub and said it plans to roll out a new programmatic buying platform that will be available for "all major agencies" to use by the fourth quarter.

In a roadmap that it showed to investors, ITV expects to add "supply-side capabilities" and a data management platform in the first half of 2020 and a "fully programmatic, integrated and automated buy and supply-side platform" should be in place by the second half of next year.

Separately, ITV plans to make an extra £5m in efficiency savings this year and a further £15m over the next three years.

Should media platforms do more to protect PSB channels?