Britain has a big problem. Despite living in a world-beating Olympic powerhouse, almost half of us fail to meet recommended physical activity targets.

Every four years the Olympic Games fires up the nation’s enthusiasm for sport, but this doesn’t convert into action. Even after a hugely successful London 2012 Games, with massive infrastructure investment, Britons watched sport but didn’t take part.

In 2016, the Rio Olympics promised yet more nationwide enthusiasm for sport, but also  risked being another missed opportunity to get Britain moving – unless something was done.

ITV and The National Lottery came together with a shared interest in solving the problem. As Britain’s biggest commercial TV network, ITV wanted to show that it could be a force for good in society. Also, with broadcasting rights to the Olympics held by the BBC and Channel 4, the broadcaster needed a smart way to be part of the Olympic conversation.

When it came to The National Lottery, too few people realised that much of the money raised from the sale of tickets goes toward funding good causes; Britain’s Olympic success since 1996 has been made possible through Lottery contributions. The Lottery therefore needed a way to make people aware of its Team GB funding, because this would give the public another reason to play.

From their individual objectives, the partners set out to create a single marketing strategy capable of accomplishing two distinct tasks: getting Britons off the sofa and out exercising, and encouraging people to play The National Lottery to ensure that Britain’s athletes keep getting the funding they need.

But this wasn’t going to be easy. For many people, it seemed neither playing the Lottery, which does not often result in a life-changing multimillion-pound win, nor exercising (see Lazy Britain box, below) was worth it.

People feel good about Britain’s Olympic success; they have a sense of pride and ownership when British athletes triumph. Our plan, then, was to create a way to turn feeling into doing – by translating viewers’ emotional investment in Team GB into a physical involvement.

To bring our idea to fruition, we needed to bring in more partners. We approached the British Olympic Association about using its marque, and UK Sport about using its Olympic athletes. They both loved the idea. They could see not only how it would get Britain active, but also the need for people to keep playing the Lottery to ensure the continued funding on which Olympic success depends.

Moreover, the activity would prove that elite sport could encourage grass-roots participation, something the two organisations believed to be true but hadn’t been able to demonstrate at scale. 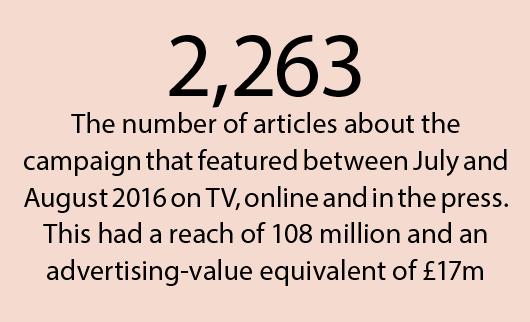 So, in just four months, we created the "nation’s biggest ever sports day", which took place on 27 August 2016. The aim was to create a national event where everyone, whatever their shape or size, could feel comfortable trying out sport alongside both super-fit Olympic athletes and less-than-fit celebrities. This gave everyone the opportunity to be part of Team GB.

Our first task was to create an experience to make participants feel part of the winning team. We signed up thousands of grass-roots clubs and sporting organisations in every UK region. Partners ranged from local sports clubs, Scouts groups and OAP centres, to national governing bodies and groups such as Parkrun and British Military Fitness.

To overcome the many practical and emotional barriers facing the average person when it comes to exercising, we designed a Sports Day where:

There were more than 2,600 grass-roots clubs, 360 park runs and 14 flagship events (one in each ITV news region) involved. Each club received an "I am Team GB" pack for on-site branding and to make the day feel special.

It was easy to find an event nearby

However, for those who couldn’t travel to an event, we reassured them they could still be part of the team by taking part on their own.

As the sports day offered clubs a huge recruitment opportunity, we persuaded them to take part for free, which, in turn, enabled us to offer every event to the public free of charge.

Everyone was welcome, not just sporty types

We deliberately included "un-sporty" venues, such as the beach at Hope Cove in Devon and Bath city centre.

There was something for everyone

The 85 activities on offer ranged from archery and hula hooping to volleyball.

It was easy to get involved

A dedicated website, which had the Lottery’s funding story woven throughout, enabled visitors to search for events by postcode.

Unmissable, once-in-a-lifetime experiences were also part of the mix. UK Sport signed up hundreds of victorious Olympic athletes to take part alongside the public.

Special venues were another feature, with ITV soaps Coronation Street and Emmerdale opening their doors for table tennis on the "cobbles" and a duathlon through the Yorkshire Dales, respectively.

Taking the message to the masses 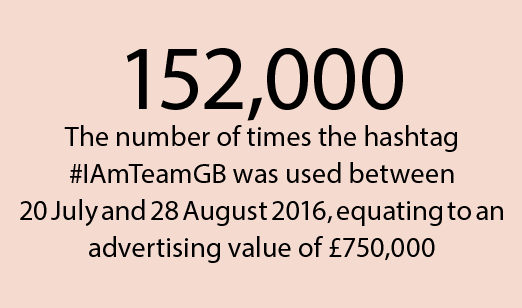 We used marketing to build the emotion and make everyone feel part of the winning Team GB.

Communications fired up enthusiasm and kicked off recruitment. TV ads were used to land the Lottery’s funding message, encourage ticket purchase and persuade people to sign up to the sports day.

Our key image, used across every touchpoint, presented an "ordinary" Briton standing alongside a Team GB athlete. We devised the rallying cry "I am Team GB" and encouraged talent, athletes and the general public to adopt it.

Olympic heroes encouraged people to join them at the event and thanked them for their funding of the team. Meanwhile, a range of ITV talent chosen to represent the average non-sporty Briton acted as recruiters for the event.

We activated cross-media efforts, across all partners’ channels around three key "winning" moments: the Rio Olympics opening ceremony, "Super Saturday" and the return of the Team GB athletes from the Rio Games.

Channels were chosen for their ability to drive reach and generate conversation fast. We focused on TV advertising as well as editorial, out of home, National Lottery stores, social media, talent/influencers and PR.

Turning off the telly

On the day of the event we turned off the ITV network – all seven channels – for an hour. This was to drive PR, make the campaign famous and give people another nudge to get active.

The switch-off got people talking. It generated more than 2,200 features in TV editorial and in the national, online and regional press. "I am Team GB" featured on the front page of The Daily Telegraph and in a double-page spread in The Sun as well as being BBC Radio 5 Live’s "Story of the week" and the top story on the BBC News website on the day.

The campaign was backed by celebrities and sports stars, with hundreds of them, including astronaut Tim Peake, Olympian Mo Farah and London Mayor Sadiq Khan, tweeting support. Every time the hashtag #IAmTeamGB was used, people received a personalised message from an Olympian thanking them for their support and pointing to the event.

• "I am Team GB" got more people participating in a sports event than any previous campaign.

• On 27 August, nearly one million people across the country had a go at everything from aerobics to yoga. To put this in context, Sport Relief attracted 70,000 to its Sunday Funday in 2016, while the previous world-record-holder, Race for Life, had 125,000 participants.

• More than half of the sports day’s participants described themselves as "non-sporty" people, who rarely took part in sport.

• The effects lasted long after the day itself. More than half of the participants were still exercising two months later.

• Nearly 75% of participants had a more positive view of The National Lottery and ITV after the activity.

This simple, powerful idea, "I am Team GB" – built on the premise of "feeling part of the winning team" – ended up as a win-win for everyone. Each of the four partners exceeded its goal. In addition, it inspired the biggest mass-participation sports event in UK history.

Britain has the third-most slothful population in Europe, with two-thirds of adults failing to do enough physical exercise to keep themselves healthy. Only in Malta and Serbia do those over the age of 15 exert themselves less than in the UK (The Lancet, 2016).

The British can cite plenty of reasons not to exercise. These range from the practical –

For most, the "wins" of fitness or weight-loss are not quick enough.

Clare Phillips is head of brand planning at ITV and Adam Chataway is marketing and sports partnerships lead for The National Lottery.