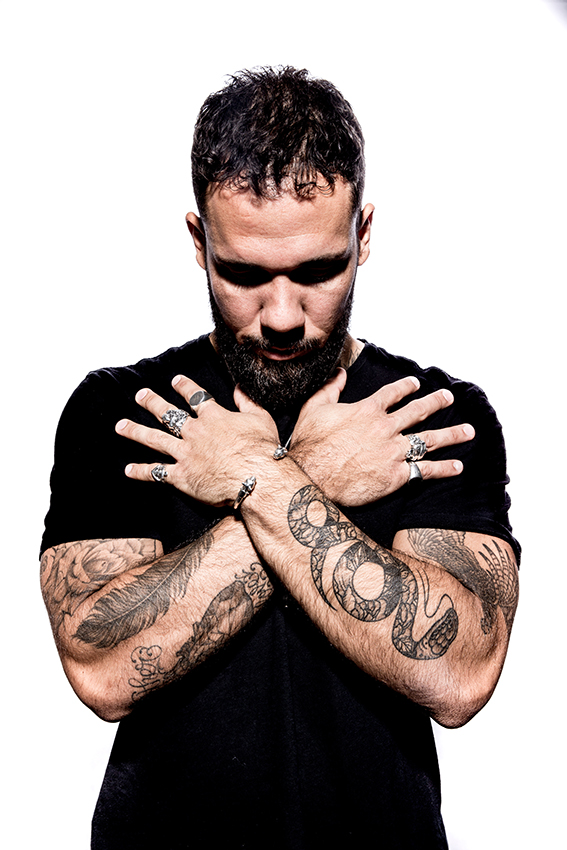 I’ve got a lot of tattoos – both my arms are done, my thigh, legs, some on my torso, on my back, but they’re quite varied. There is a theme, though. I’m originally from Brazil but I’ve moved around and lived away for most of my life. However, I’m super close to my family, so all my tattoos reflect some sort of relationship with them.

My family are everything to me – but if you met me or saw my work, you probably wouldn’t know that about me. The tattoos remind me of them and they’re a reason to bring my family up in conversation. They’ve become little memory triggers of things I always wanted around me in my life but that I couldn’t have physically.

I’m an art director and I’m slightly particular, so all the tattoo artists are people whose work I always loved before I even liked tattoos. I have to wait six or eight months just to get a sit-down with an artist I like. I have a roster of maybe three or four artists, depending on what style I’m after. They’re all black and grey. I don’t have any colour in anything but they all have different styles. I always tell them what I want but I never get what I want, which is great – it’s a collaboration.

Just getting the tattoo and the occasion itself is so special. You spend six hours in a chair just chatting to someone. The occasion of having it can often mean more than the actual tattoo.

To be tattooed, like it’s my brand, it’s what I want people to perceive me as. I want people to know that I care about certain things, that I look a certain way. My aesthetic – as an art director – is a way in to a bigger story. And it has dictated my path – the brands I work on and the projects I do reflect the way that I look.

My dad is massively against my tattoos, though, which is ridiculous as they’re all for my family – much more for them than they are for me. But my dad hates them. 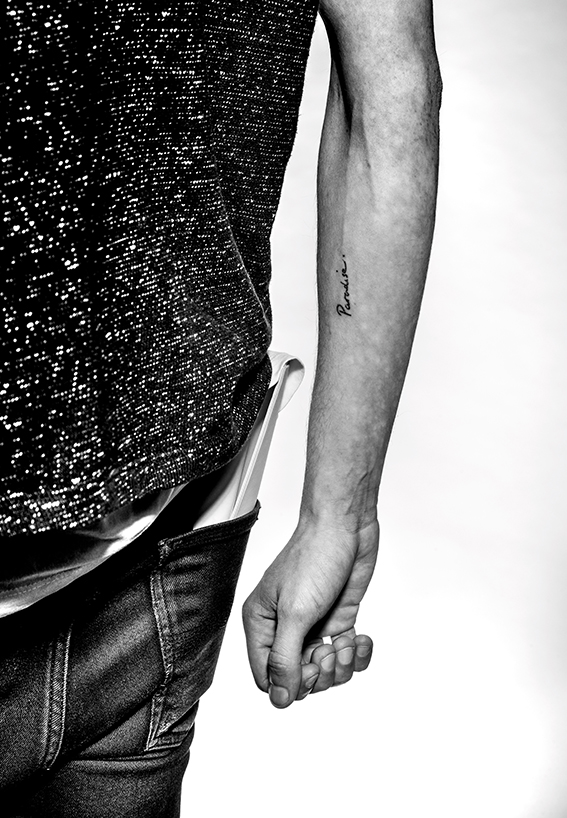 I only have one tattoo – it’s quite a poignant one for me. It’s the word "Paradise" in my late uncle’s handwriting. He’s the reason I started writing. Unfortunately, he passed away last year – and as I went through the letters he used to send me and I realised he gave his return address as Paradise, I wanted to honour him.

If I have a pen in my hand, it’s impossible for me not to see it. My uncle had a unique way of writing that I drew inspiration from. I think it’s very easy when you are writing for other people to lose what makes you a great writer or creative. It’s a constant reminder to me to be honest. It makes me only write things I’m proud of.

I’ve always wanted one. Every time I’ve had an idea for a tattoo in the past, I’ve been glad I haven’t gone through with it. I’m deliberating my second one now. 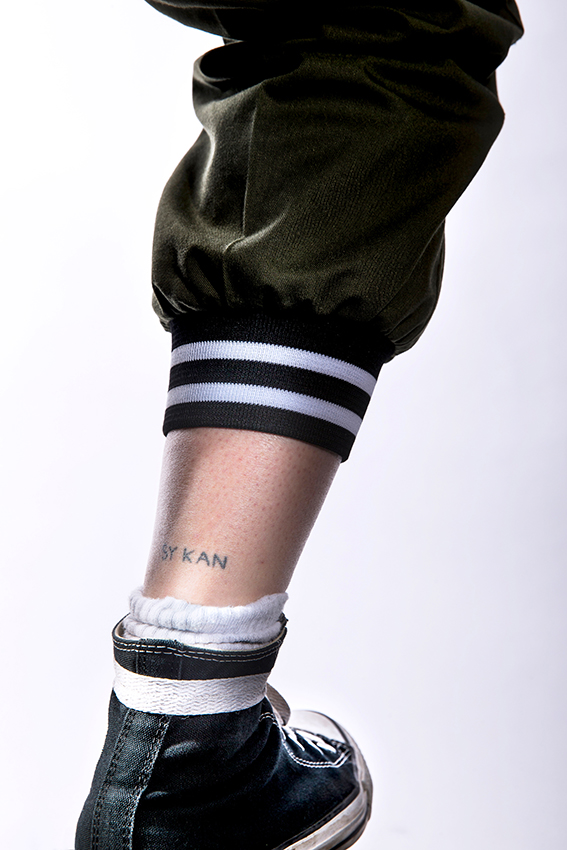 When I have a tattoo, it’s because either something really matters to me or I want it to really matter to me. I’ve six in all, but only two that aren’t words.

One of them is a flower from South Africa, where my parents came from. I chased down the artist, Anna Ustrehova, because I’d been following her on Instagram and really liked her style. She was based in Paris. I couldn’t afford to go as I didn’t have much money and was spending all of it on getting the actual tattoo. So I decided to hitch-hike. I wrote up a hitch-hiking sign but my dad caught me sneaking out of the house and, in the end, bought me a bus ticket to get there.

The first words I got tattoed were "SY KAN" (she can). It’s obviously really empowering. It makes me work hard, gives me focus. And I’ve got a reminder that hard work beats talent. I also have the words "good" and "luck" done by the artist Patrick Bates, but they’re crossed out; I don’t like those words. It’s a cliché, of course, but good is the enemy of great and lucky is one of those words that people sometimes allow to define them.

There’s a huge surge of tattoo artists on Instagram. It’s changed the industry – it’s kind of like an art collection hobby now.

When you’re growing up, people talk about tattoos and say that they can get in the way of your career prospects. But Nils [Leonard, Uncommon co-founder] said it was one of the reasons I got the job here. Tattoos are always conversation starters. It’s like wearing your heart on your sleeve. It’s your values and a story about you right on show, and you can share that story with people. It’s a really interesting way of expressing yourself. 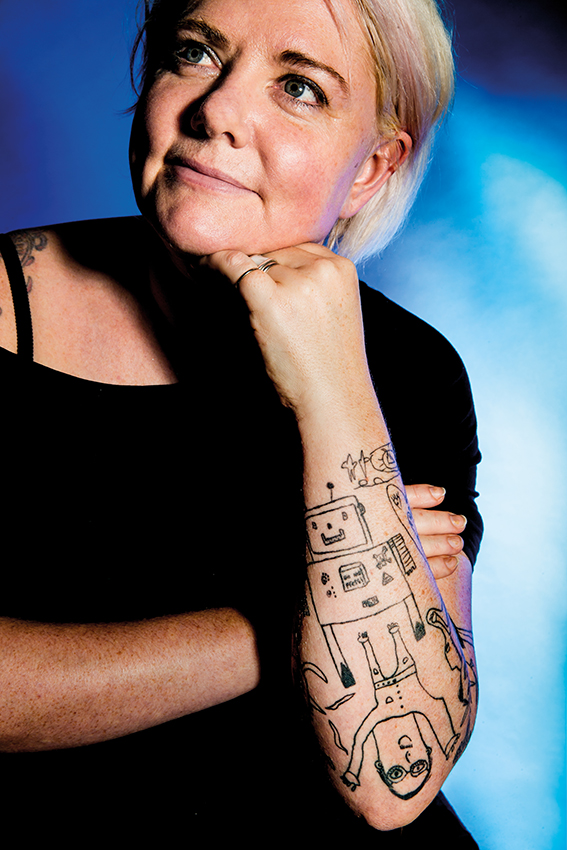 My son’s drawings are all over my left arm. They include a really weird cheese block thing with arms and legs and a volume dial as its hat, as well as a robot with a giant button and a coin-slot willy.

He was playing up at school and the teacher called me in and said they had noticed it was usually when I wasn’t around. I couldn’t change my job or the nature of it – I do need to travel – so I had to do something to show him what it means to me to be away from him.

So if I’m away for longer than a week, I ask him to draw me a picture that I can have tattooed on to my arm. He has had a turnaround and it’s a really lovely thing we do together. It’s been going on for three or four years now. We started at my wrist and we’re almost at the top so he’ll have to draw smaller ones to fill in the gaps. I can really see his drawing skills developing.

I had my first tattoo 25 years ago. Being a woman, it’s a statement on not worrying too much about what others think of you. That’s a good creative approach to have.

From a young age I’ve kept my arms clear because I’ve worried about clients not taking me seriously. I’ve always wanted to be completely covered. Having amazing business partners and clients, and it being 2018, has allowed me to do that. Before, when I was less confident and working at larger agencies, there was a pressure to conform. 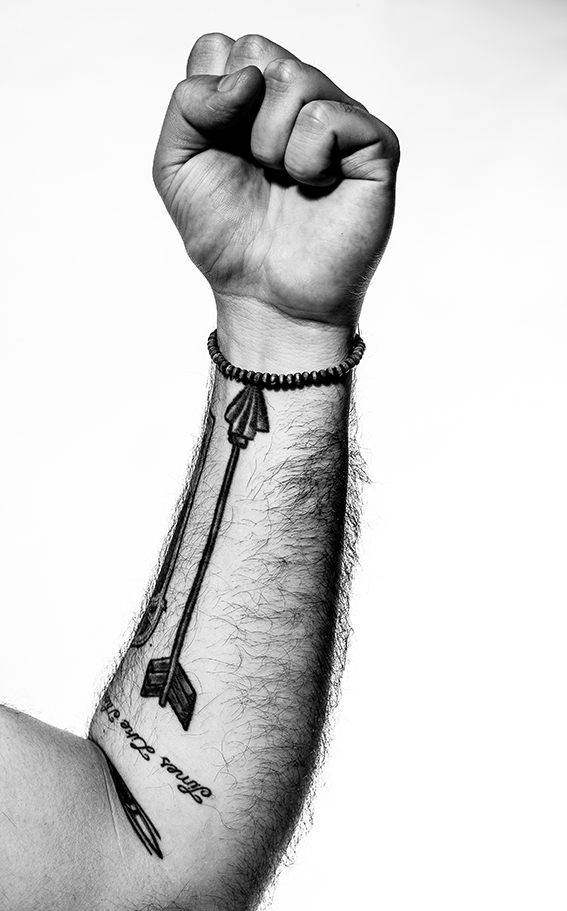 I don’t like some of my tattoos but when I realised it’s not about the look or style or artist and more about the meaning behind them, I became more comfortable with them. Over the past 10 years, the tattoos have all changed, as have their meanings and references – it’s something that grows with you.

My least favourite is the first one I had at 17. It was the first time I moved abroad – I am from Brazil – and it was quite a challenging moment so I decided to have a tattoo. It was just something written but the tattoo artist encouraged me to have a tribal around it. I really don’t like the tribal so I’ve covered it up. I’m proud that I haven’t erased any others.

I think tattoos work in shaping people’s perceptions of you. It shows that the person is comfortable in their skin and willing to tell stories. Sometimes people stop me to ask about my tattoos and I enjoy creating stories that aren’t real and don’t make any sense. I have four pine trees on my arm that are related to my childhood but I once told someone that it’s because I love Christmas.