Marketers have revised their budgets up in the first quarter of the year thanks to a growth in online adspend, according to the latest IPA Bellwether report.

The latest Bellwether reports an extension of a record run of marketing budgets’ growth to four-and-a-half years.

A net balance of 11.8% of companies said marketing budgets would increase during the first quarter of 2017, down from 12.9% for the final quarter of 2016.

The outlook for 2017/18 budgets remain positive among marketers too, the report suggests, with a net balance of 26.1% of companies signalling growth for the coming year.

Meanwhile, 32% of companies surveyed reported an improvement in their financial prospects, compared with the less than 19% that thought things would be worse during the quarter. The net balance – up 13.9% – is an improvement from 11.2% recorded in Q4 2016.

However, prospects for the wider industry remain gloomy. The net balance is -5.7%, better than the -14.6% net balance recorded in the previous quarter.

Internet growth reached the highest level recorded in just under four years, with a net balance of 16.9%, up from 12.1% in the previous quarter, with search and SEO rising by its greatest degree in over two years to 15.1%.

Main media advertising also enjoyed a strong upward revision, with budgets up to 10.7% (up from 5.1% in Q4 2016). Direct marketing budgets have increased to 5.3%, up from a stagnant 0% in the previous quarter.

Other categories that registered an increase in marketing spend included sales promotions (1.2%) and PR (1.1%). However, "other' (-4.5%) and market research (-9.9%) both recorded worse budget positions compared to those at the end of 2016. 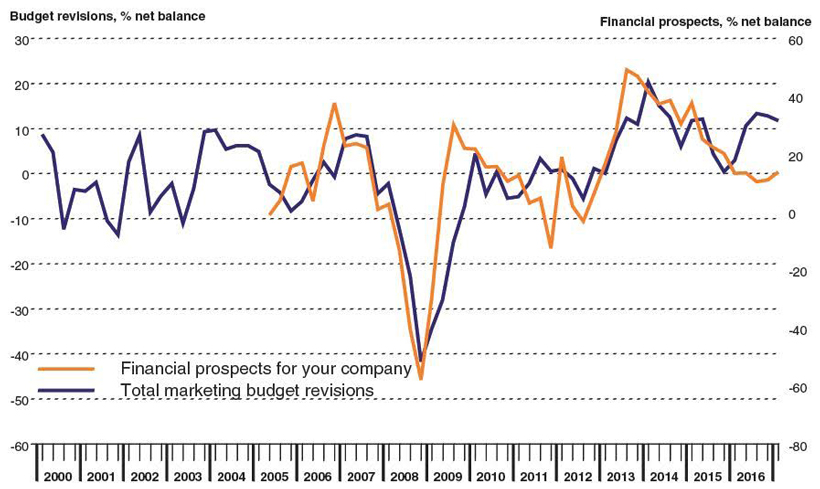 Adspend is expected to stagnate next year, according to Bellwether, with growth expected to return in 2019 and 2020 with rates of 1.8% and 2.3% respectively. However, the IPA said uncertainty over Brexit negotiations and the UK’s departure from the European Union meant current forecasts "remain especially uncertain".

Paul Bainsfair, director general of the IPA, said: "Once again the Bellwether shows that while the impact of Brexit remains uncertain, marketers are continuing to invest in marketing.

"Furthermore, despite the current, turbulent digital ecosphere, it is clear that marketers are attracted to the cost-effectiveness of digital advertising and its ability to reach and accurately target their consumers."

A fifth of UK agencies lost business due to Brexit

Why adland wants to be more like the events industry

Will marketing spend decline in 2017?