Like many Western elections, campaign conversation in Nigeria has moved to Twitter -- but with some very big differences, writes C. Moore Media founder

LAGOS, NIGERIA — As I write this article from Lagos, the largest and arguably most sophisticated city in Africa and the commercial center of Nigeria, the people have just heard that their country has made history.

Nigeria’s military dictator from 1984 to 1985, Muhammad Buhari, has been declared the winner in the most tightly contested and first democratic transition of power in Nigeria, a democracy of a mere 16 years.

This is a historic moment not only for Nigeria but for Africa, a continent not known for seamless and smooth democratic handovers from one political party to another.

What is also unprecedented is the way the election campaigning, commentary, and predictions have all played out on social media, in particular Twitter, and in the communications strategies of parties. The incumbent Peoples Democratic Party is led by former President Goodluck Jonathan and the All Progressives Congress (APC) led by now President Muhammadu Buhari.

Early on in the campaign, Buhari’s communication team, reportedly supported by AKPD Message and Media, which was founded by former Obama campaign manager David Axelrod quickly and fervently attached itself to the tried and tested messaging of "change." 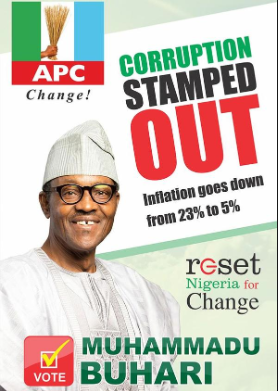 The newly appointed president consistently pushed the messaging of "change" to an electorate that has suffered under the violence of the terrorist group Boko Haram. The country also remains plagued by corruption and its economy is suffering due to the huge devaluation of the Naira amid falling oil prices. From billboard posters to tweets from the new president’s handle, @ThisisBuhari, the messaging about change was clear. This captured the imagination of the socially connected electorate in particular on Twitter, where the perception of the candidates and the election process has largely taken place.

We can and we will bring #Change to Nigeria peacefully. I call on the PDP to join this call for peace. Every Nigerian life is sacred - GMB

Twitter is one of the best social media platforms for conveying political messages in bite-size pieces to an electorate with an ever-decreasing attention span. Curiously, this platform seems to have been abandoned altogether by Jonathan, whose official Twitter account, set up in May 2011, has been unverified and unused for the last four years. This is in stark contrast to Buhari, who only joined Twitter in December 2014 but already has a verified account, over 160K followers prior to the election, and has been actively using Twitter in the lead up to the election with tweets personally drafted by him signed with his initials.

It must be said that Rueben Abati, the official spokesperson and media advisor to Jonathan, has a huge Twitter following and is an enthusiastic and robust user of the platform. The account seems to have been used as the "Twitter mouthpiece" for the outgoing government and president, with varying degrees of success.

#NigeriaDecides and #NigeriaElection2015 have been the hashtags used throughout the campaign by both the political parties and voters. Organizations such as the Independent National Election Commission, led by the hugely popular Professor Attahiru Muhammadu Jega, have used the official INEC Twitter handle brilliantly throughout the electoral process with frequent updates and accurate information. Several key activists and journalist influencers who were already popular on Twitter leveraged their popularity, or influencers, among the socially connected voting population to inform and persuade voters to elect respective parties, and most importantly to do it peacefully.

During the campaign, right up until the last few days, influencers such as journalist Tolu Ogunlesi (114,000 followers) and Japheth Omojuwa (204,000 followers), a Nigerian blogger and political commentator, are both hugely popular and the accounts to follow.

They were tweeting for what seemed like 24 hours working through the night despite intermittent power cuts to provide on-the-ground and up-to-date coverage.

Other influencers such as Imad Mesdoua (12,300 followers), a political analyst at Africa Matters, and James Schneider (17,000 followers), editorial director of a leading African business magazine, also became Twitter handles to follow as the results unfolded.

Mesdoua drafted a customized map highlighting the states as the results came in and also provided detailed state-by-state coverage, statistics, and facts to an eager audience of Nigerians and the Nigerian diaspora, as well as to a pan-African and global audience.

Schneider live-tweeted over three days, providing similar statistics coupled with analysis while conveying issues with his Wi-Fi. He also got into minor Twitter spats and is said to be the first to call the results on Monday evening with this single tweet.

It’s hard to imagine the electoral results in the US being called by a reporter for a business magazine instead of a major broadcast network.

In typical social media fashion, things have quickly moved on, and new hashtags and conversations have started. A quick scan of the conversations using hashtags such as #FreshNigeria and #NigeriaHasDecided, and you will see that the focus is shifting from celebration to a demand to see the "change" that Buhari has promised on the election trail.

The opportunity and promise of Nigeria is great, and now is a time for the country to get it right. The world is watching – on social media.

Claudine Moore is a consultant and founder of C. Moore Media, which specializes on the African market. She lives and works in Lagos, Nigeria.