The imposing wrought iron gates that hide Innocent HQ from the rest of West London don't fit well with the image that Innocent conjures up: a funky, conversational brand.

But step inside the building and what the brand wants to project to the outside world becomes clear. The "Fruit Towers" reception is chaotic, with scores of chattering schoolchildren waiting to be shown in by an enthusiastic host. A fridge stands packed full of smoothies wearing little knitted woollen hats.

Even the way the receptionist answers the phone reveals a brand that likes to be seen as unique: "Hello, Innocent banana phone?" she chirps, before gesturing towards the guestbook which requests you jot down, alongside more regular details such as name and company - your signature dance move.

All of this makes for a somewhat bizarre introduction to the smoothie brand. Weaving through HQ and up the stairs, the centre of the building is given over to a giant wooden bench shaped like a banana and a table tennis set.

The look and feel of the brand, which was a disruptive challenger when it was founded, seeps through the building, but now 15 years old and controlled by the biggest soft drinks firm in the world - Coca-Cola, Innocent is going through a different phase of development.

The company's co-founders, Richard Reed, Jon Wright and Adam Balon, have stepped aside since Coca-Cola took a 90% stake in the business in 2013. Coca-Cola has no hand in the day-to-day running of the brand - but it does provide significant scale and investment.

Fake grass abounds, even in the boardroom where head of UK marketing Helen Pomphrey explains what she sees as one of the best things about the brand - that the culture is "genuine".

"When you come to the offices you can see it’s not people in suits - its ran by people who reflect the Innocent brand," she says, clutching Innocent's latest NPD - a newly designed bottle for its carafe juice range that will hit shelves in March.

The packaging has been overhauled to make more of the flavours and the freshness. The labelling is clearer and printed directly onto the packaging, rather than on paper, showing more of the contents. It is just one of a number of redesigns and new launches set for 2015 and aimed at building brand momentum.

European sales shot up 30% in the year to 31 December 2013, but UK sales dipped 2.4% thanks in part to increased competition in the sector. The brand has also come under pressure from the so called "war on sugar", which has lumped juices in with sweets and chocolate, in part contributing to a slump in smoothie sales across the category as consumers reach for alternatives.

The new bottles, Pomphrey explains, are designed to highlight what Innocent stands for: freshness and health. The transparent labelling gives over even more prominence to the contents, "really driving visibility" of the juice range.

The focus on ingredients and flavour is a theme that has always ran through Innocent's marketing, but Pomphrey explains it is being brought back to the fore in an overhaul of the brand's strategy to focus on provenance. The ethical-led TV ads have been scrapped in favour of a focus on ingredients. The messaging is being pinned around expertise, freshness and flavour.

Marketing spend is being increased and the brand is doubling the amount of TV ads it will air this year as part of a new "recency model" that aims to keep the brand front of mind.

The new strategy kicked off in January with a 30 second TV spot featuring its juices and smoothies products together for the first time. Developed by an in-house Innocent team and agency 101, the ad features an Indian mango farmer with the aim of highlighting the quality of the fruit.

It was the start of a change of tact for the smoothie brand towards driving an "always on", "master brand" approach.

"Previously we used to do big bursts of activity and then go off air for a few months, which was really good at driving spikes - but now we’re more established what we need to do is maintain awareness," Pomphrey says.

"So we’ve moved to what we’re calling a 'recency' model where we’re minimising the time when we’re off-air, it's a different approach to what we’ve done before. Now we’re on air almost every week and we’re aiming for a minimum of almost 30 weeks out of 52."

Innocent has scrapped its earlier ethical-led TV spots, where the Innocent Foundation charity partnerships were in the fore, though the fact Innocent donates 10% of profits to charity is still "an integral part of the brand" and will continue to be communicated "through every other channel".

The style of the mango ad campaign will be repeated throughout 2015 and will change to focus on different ingredients, starting from April. Fruit will continue to be the focus of Innocent's marketing strategy for the next two to three years, Pomphrey explains.

"One of messages we want to land is that we’re experts and we care very much about fruit.

"[The campaigns will focus on] the dedication it takes to get great tasting fruit and the fact we work with suppliers who really care about it as much as we do."

The primary objective of the step change is to push "the taste message", which ties in with Innocent's three brand/sale 'correlators': taste, natural and health, she says.

"It’s just a change of focus, there’s a lot of messages we could get out there and it’s picking the right one for the right time."

She adds that consumers are confused about sugar, and admits that while some consumers have asked about the sugar content of Innocent smoothies (they have been the subject of newspaper studies claiming they contain 60% more than Coke), that "most consumers get that our products are good for you." Communicating the pure fruit ingredients helps communicate this.

We’ve spent a lot of time looking over at the states to see what’s developing there as an indicator of what could be coming to the UK...  Definitely green smoothies, with added things like kale

At the same time the needs of Innocent's core consumers (25-45 year old ABC1 males and females) are changing. The brand is innovating in new spaces, riding the wave of the functional food trend with the introduction of "super smoothies" and veg blended juices.

When Innocent launched 15 years ago, it was a unique brand with an almost cult like popularity, but thanks to copycat brands and own label alternatives, some of that has been taken away meaning the brand has to continue to innovate quicker.

"It’s a category that’s constantly evolving so we need to make sure we’re evolving, adding things like vegetables, vitamins and minerals. Because there are always new health trends, [the category] evolves quite quickly.

"So we’ve spent a lot of time looking over at the states to see what’s developing there as an indicator of what could be coming to the UK... Definitely green smoothies, with added things like kale."

Spend, which has "increased a little bit" is split 80% TV and 20% below the line. Digital and experiential are also important components of the Innocent marketing mix.

Previously we used to support our bigger campaigns and put a lot of spend and focus on our digital activity but we actually found the most engaging content is just stuff that happens at the right time. We have an in-house team that can turn creative content around really quickly and having the flexibility means we can get a much stronger reach."

Quick, tactical social media campaigns drive engagement with the brand, she says. And Innocent has the benefit of having a more conversational brand personality, meaning it can piggyback events with some credibility among consumers. For example, the brand took out a spoof apple ad in the Metro to time with the launch of the latest iPhone. 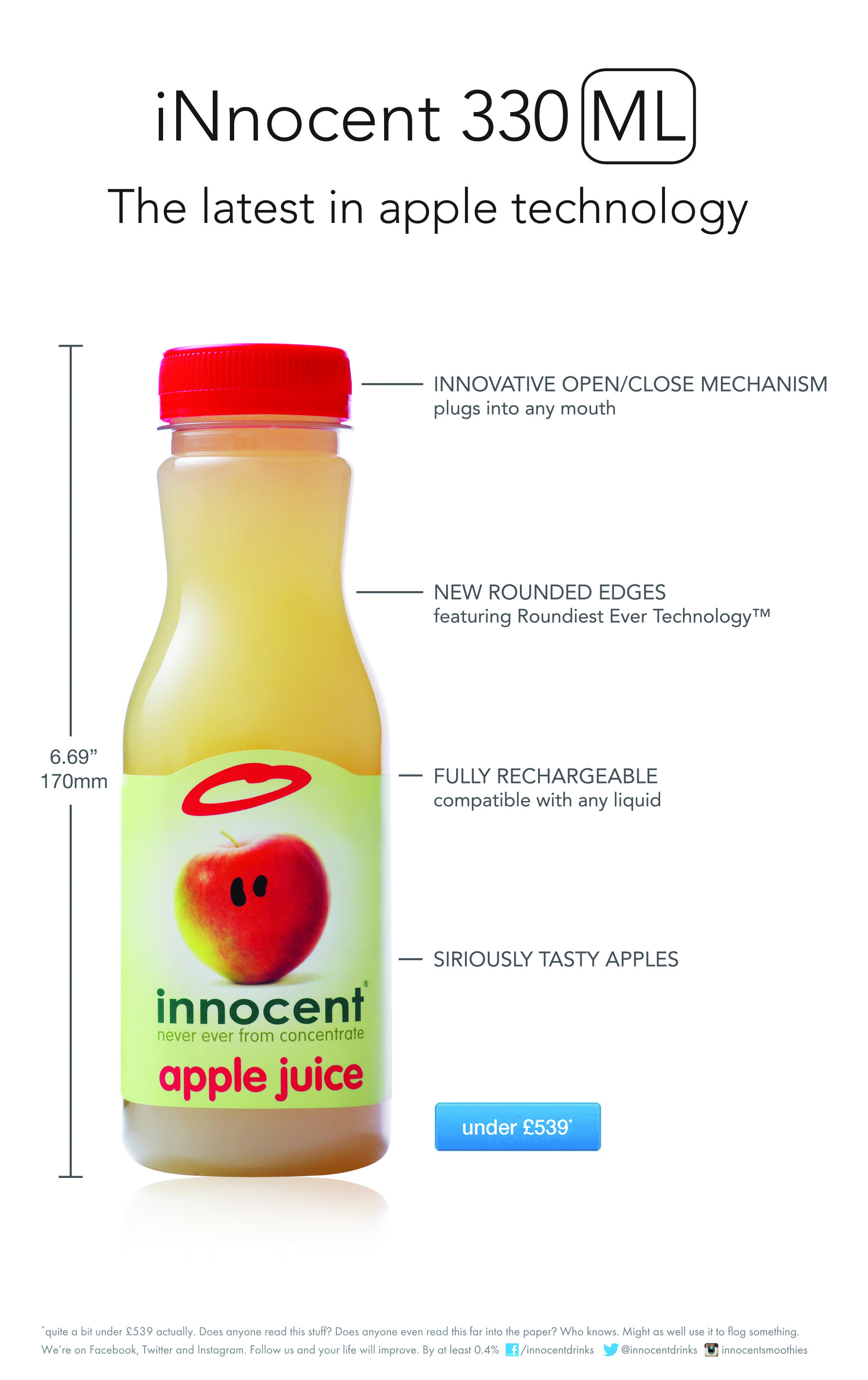 The key challenge is, however, acting like a big FMCG brand whilst also keeping the personality of a small company.

"One of the biggest challenges that we face is that as we get bigger we need to behave the same way as other big FMCG brands but find a way to keep us special and unique. You have to be able to operate at both levels to win."

Pomphrey shrugs off the suggestion that the perception of the brand might be dented for consumers who grew up with Innocent before Coca-Cola took a controlling stake, perceiving it as an alternative to mainstream brands. She says millennials have learnt the brand in a "different way".

"I think there was an expectation that the brand would change but I think at the heart of things we’re still the same as we were.

"I think it’s a really exciting year for Innocent, especially after the change [that saw Coke take 90% control of the brand]. We’ve really found our feet again and have got some great marketing activity and innovation coming up, whilst still keeping the smaller brand touches that keep us different."

How Adobe Kickbox can get marketing teams innovating like tech superstars