Imitation is the sincerest form of flattery, but will Facebook adopting Twitter-style hashtags work as effectively on its closed platform?

Facebook has a history of borrowing from competing platforms as was seen by Foursquare, Quora and Google+ Circles, leading to Facebook Places, Questions and Smart Lists respectively.

Adopting Twitter’s massively popular hashtag feature has been on the cards for a long time and Facebook believes it is onto a winner due to the amount of conversations that are already happening regarding popular cultural events, such as the finale of Game of Thrones. 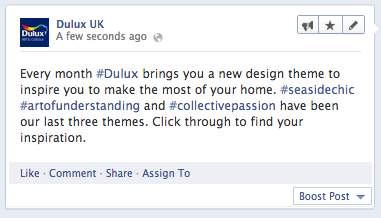 Dulux UK (right) and Malibu are brands that have already jumped on board with the rollout of the new feature after their digital agency AnalogFolk pre-empted the launch of the hashtag by readying a stream of content.

Marketing spoke to industry experts to find out how hashtags would go down with Facebook users and whether Twitter should be concerned about Facebook encroaching on its territory. 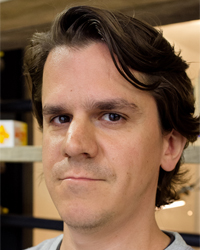 "This latest development from Facebook brings the platform up-to-speed with Twitter, Instagram and other social platforms. Hashtags have become fairly common vernacular culturally, within above-the-line media and over recent months have been creeping into Facebook. Facebook is now simply supporting a more frequently used form of communication.

"However, whilst Twitter profiles are predominantly unprotected, Facebook profiles are on the whole locked down. Therefore, Facebook hashtag usage will differ from Twitter's, more likely featuring content only from known friends, but also brand pages. This is unlikely to worry Twitter as hashtags enable content and conversations to be more easily navigable within Facebook but won't change the underlying usage habits of Facebookers." 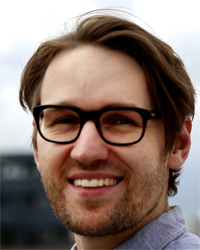 "Facebook would love to tap into the 'real-time' public conversation in the same way that Twitter does, but the challenge for Facebook is they have always been considered a private social network for people you actually know. This is in contrast to the very public nature of Twitter where you can more easily tap into the public consciousness through search and hashtags. Whether Facebook can credibly straddle the line between being a personal social network and a public platform is open for debate.

"Twitter has successfully positioned itself as an important second screen platform, which makes it attractive for advertisers and agencies to integrate Twitter into campaign thinking, and therefore spending. Facebook may well be going after their ‘second screen’ dominance and the near ubiquity of using hashtags in advertising campaigns to drive conversations. Which is no doubt why they will allow advertisers to include hashtags in Facebook advertising as it's rolled out." 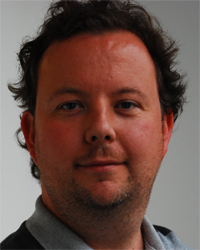 "Facebook hashtag is not in most paid formats, it’s just in desktop newsfeed ads. So that means the majority of brand fans won’t see them. It’s not in insights and you can’t see if anything is trending, so the science of "learning by doing" will be interesting to start with. But inevitably this stuff will happen in full and brands will get to grips with using an additional tactic to generate more connected conversations between consumers and brands, and surface content in different ways – all powered by the consumer, and inevitably with the option to amplify with paid media.

"We are, on reflection, positive about the Facebook hashtag and what it points to in the social platform world. Facebook users don’t generally like change, timeline had a negative response to start with. So introducing something already in use in everyday conversation and by the majority of their competitors (Twitter, Instagram, Pinterest, Tumblr, Google+) is a no brainer.

"Ultimately the consumer will have more conversations unknowingly surfaced by their ever-perplexing privacy policy. The Facebook conversations you think you are having between you and your friends will be increasingly surfaced. This consumer’s won’t love. Ultimately the hashtag has momentum because it is useful and a part of the everyday. As long as Facebook manage the privacy piece against their commercial goals, they won’t go far wrong." 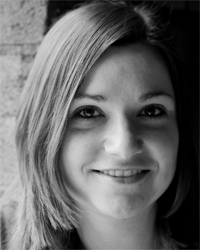 "Introducing Facebook hashtags is a step to accommodate user experience – lots of users publish their Tweets to Facebook automatically or use hashtags in posts to simplify self-expression. It will also enable the global launch of Open Graph, making content more easily searchable. As a result, we may see some Twitter users coming back to Facebook, or considering it for new, more opinion-led purposes. The hashtag has become hugely important in real-time marketing and SEO, and Facebook was missing a big opportunity here.

"Facebook is beginning to feel threatened not only by Twitter, but also by a number of other niche social networks that attract users with simplicity, ad-free space and ‘antimonopoly’ approaches. Having a Facebook profile has become stressful for many, as it bares too much, often to bosses and colleagues, meaning users end up turning their pages into fairly bland, non-expressive forums. Adding a new functionality to user experience is a clear attempt to avoid losing active users." 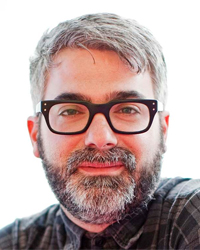 "The launch of Facebook hashtags seems like a depressingly obvious move that has limited user benefit in reality. In theory, opening up Facebook conversations so that they feel part of a wider context is a good thing. However, with such sensitivities around privacy and data it's obvious that some users will rebel against it. Their conversations will be open for discovery and for interaction with strangers; a core part of what makes Twitter brilliant, but not really a core part of what Facebook has traditionally offered."

"It's an interesting proposition for advertisers. Being able to target an audience group by theme or real-time interest adds new opportunities for brands to target based on real-time behaviour, rather than demographic or "like" data. This has been a core strength of Twitter as an ad platform for entertainment brands and events. That said, Facebook users have become progressively more frustrated with Facebook advertising, so this move may be one step too far for some."

Twitter to use web browsing history to target promoted tweets