People around the global will spend more time consuming online media than linear TV this year for the first time in history, according to a new report.

GroupM, WPP’s media investment group, predicts online to have a 38 percent share and TV to have 37 percent, while the remainder will be spread across print and radio, in its "State of Digital" study released today.

Increased time spent with online media supports ongoing e-commerce escalation. Thirty-five countries supplied 2017 e-commerce data to GroupM, revealing cumulative transactions worth $2.105 trillion and growth of 17 percent over the prior year. It predicts 15 percent growth in 2018 to $2.442 trillion (around 10 percent of all retail).

The study also revealed a dramatic rise in the use of programmatic. On average across reporting countries, 44 percent of online display investment was transacted programmatically in 2017, versus 31 percent in 2016. This will rise to 47 percent in 2018, GroupM predicts.

For online video investment, programmatic is smaller: 22 percent in 2017 versus 17 percent in 2016, and predicted to rise to 24 percent this year. 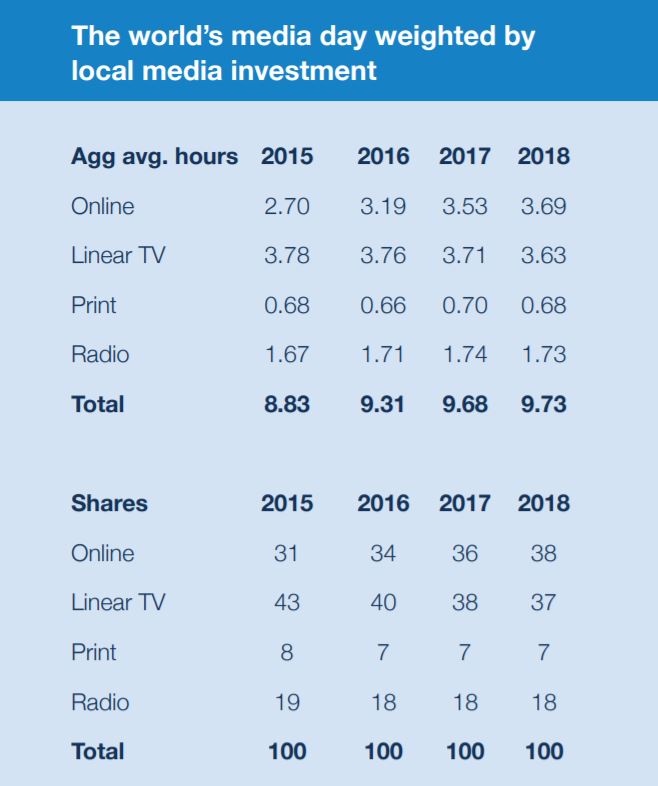 GroupM also dove into some of the industry’s hot topics.

Blockchain
So far, the report suggest that there is scant evidence of practical application.

"Blockchain’s main attraction is its distributed ledger which tells everyone everything and thus presents the opportunity to reduce inefficiency or cheating," said Adam Smith, GroupM’s Futures Director. "However, its Achilles’ heel is the need to keep every participating computer updated with everything all the time, and that’s too slow for a real time world."

"Arguably, today’s most advanced marketing tools are the advanced algorithms helping brands analyze which creative or media placement is performing the best, at scale and speed," said Smith. "Among many future applications, we expect AI to helpfully emerge in fighting fraud that evades conventional rules-based solutions."

Data
Clients are increasingly aware of the value of owned/acquired data, but are often risk-averse to harvesting, storing and distributing it. In many smaller countries, available data is poor.

Most U.S. clients are using first-party data to activate digital media, and they’ve frequently invested in enterprise data management platforms (DMPs). Other markets are not so far along for varying reasons. Marketers most often using first-party data are performance-oriented, e-commerce driven, and typically in auto, travel, hospitality, banking, or sometimes supermarkets with well-managed end-point of sale systems.

Digital video competition
Because measurement of premium video audiences across platforms is woefully inadequate in every market, GroupM asked respondents to simply estimate the share of TV incumbents versus digital insurgents. Legacy TV players are believed to hold three-fourths of all video hours but less than a third (29 percent) online video hours.

Metrics & viewability
Constituents reported some industry works-in-progress to enhance measurement of omni-platform video audiences. As this progresses, viewability continues to be debated with some contrarians, suggesting 100 percent in-view ads in mobile environments can sometimes be intrusive and can be negative to consumer experience and thus brands.

The Duopoly
Google search is critical to clients, and YouTube is increasingly important for scaled, "premium" video. Concerns over the quality of programmatic inventory in the Google Display Network persist, but remedies are being pursued.

Facebook’s success is partly due to the delivery of younger audiences via Instagram. The surge in large-advertiser investment in 2016-2017 also helped double Facebook’s share of digital investment ex-China.

"Automation and talent are the big themes in advertising’s current revolution." said Kelly Clark, CEO, GroupM Global. "One of the downsides of specialization is the increase in specialists who know more and more about less and less. We have to use automation to liberate brain-power, so talented people can look across the entire media ecosystem to help clients optimize short-term results and create long-term brand value."

Maybe ABC does not have to cancel 'Roseanne' after all

IBM dishes on the ins and outs of A.I. marketing

Are you infected with stigma? This Mental Health Month quiz has the answer