An Imperial Tobacco ad campaign promoting a free-to-download app listing smoking-friendly bars and venues has been banned by the Advertising Standards Authority for "normalising" and "condoning" smoking.

Imperial Tobacco ran a series of poster ads under the name Smoke Spots, with no indication on the ads that the free app was provided by Imperial Tobacco.

The ad received nine complaints – eight from members of the public and one from Cancer Research UK.

Copy on one poster read, "Smoke Spots. The Smoker’s Social Home. You choose where you drink, why not where you smoke? Find the best spots to smoke by location or event. Results matched specifically to your needs. Submit and read user reviews".

The app’s website encouraged users to chat with other smokers on its forums, share information on places that were smoke-friendly and search its database for venues. "Are you looking for a bar in Camden that has a covered smoking section?" content read. "No problem!"

The website did admit that "For your information this information is provided by Imperial Tobacco".

A video showing people smoking appeared above the words "The Smoke Spots Team Hit London To show the people of London how nice it is when you can smoke in a comfortable smoke spot!"

Smoke Spots argued that: its ads did not target non-smokers; that it had no obligation to communicate the harmful effects of smoking; that the posters did not appear within 200 metres of schools or hospitals; and that the ads did not promote any tobacco product, but a free app, and therefore the ads were not misleading in omitting to state that the app was provided by Imperial Tobacco.

The "about us" page of the website clearly stated that information, Imperial Tobacco added. 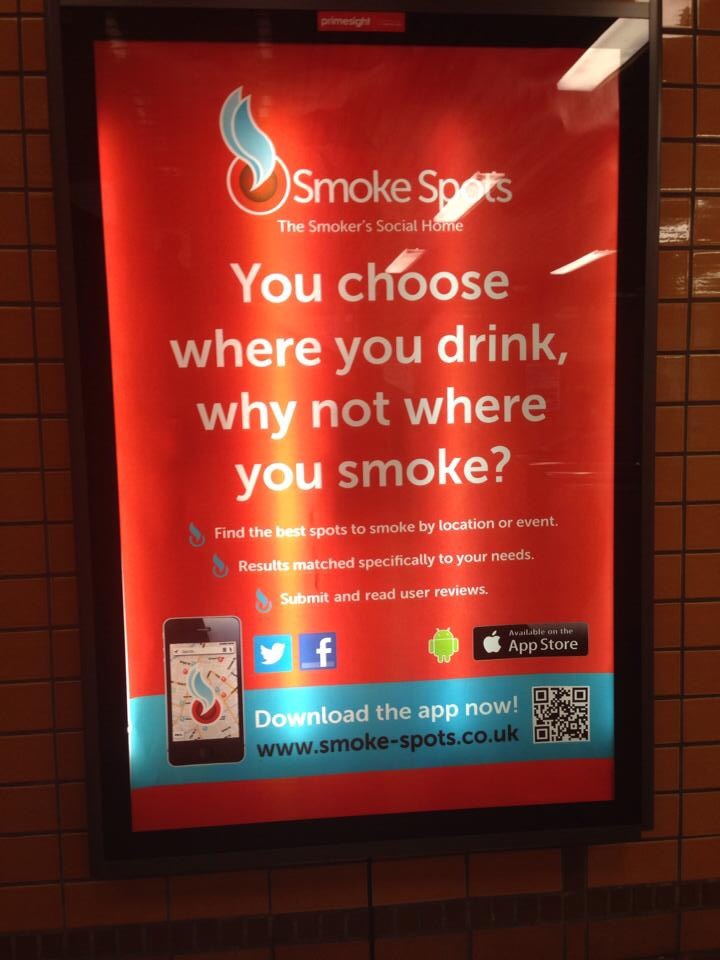 Of the six issues investigated, just one was upheld. The ASA "noted the ads neither explicitly encouraged non-smokers to start smoking nor existing smokers to continue, and acknowledged that tobacco was a legally available product".

However, the watchdog noted that the ads included copy such as "find the best spots to smoke by location or event" and "we’ve also got our pub database where you can conveniently search and find smoker friendly spots near you", and that the website included a video featuring people smoking.

The ASA ruled that the various elements in the ads "presented smoking in a positive light and the overall impression of the ads was that they normalised and condoned smoking".

"We therefore concluded that they were harmful and irresponsible on that point," it said.

The ads must not appear in their current form again, the ASA ruled.

E-cigarettes can be shown on TV under new rules