70 percent of consumers aren't impressed with "The Experience Revolution."

Every week, it seems like another brand finds a creative way to leverage technology. VR and AR, mobile payment services, connected home appliances and virtual showrooms may be giving marketers shiny new ways to showcase products and innovation, but a recent study from IBM found that consumers aren’t as impressed with these digital experiences as the brands investing in them.

In fact, 70 percent of consumers said their branded digital interactions were disappointing. The majority of participants said they weren’t impressed with virtual reality experiences used to discover products, digital displays in retail environments or voice command for customer service.

The IBM Institute for Business Value (IBV) surveyed more than 600 executives whose companies are introducing new digital tools and 6,000 consumers about their experiences using them. The study, titled "The Experience Revolution: Digital Disappointment—Why Some Consumers Aren’t Fans," is the fourth in a series examining how the customer journey is changing with technology. 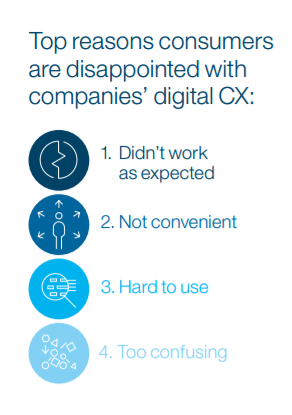 The research revealed consumers are disenchanted, said Robert Schwartz, global lead of strategy and design at IBM’s Interactive Experience division, and the disappointment indicates a deep divide between corporate expectations and consumer appetite for digital applications. Researchers asked company executives and customers the same question, "Why would consumers be willing to try new digital initiatives to interact with businesses?" The answer, said Schwartz, should drive the digital strategy of a company. Yet, when comparing the responses, he said, the results were "shocking."

Besides citing "convenience" as a major motivator, company executives and consumers didn’t agree on anything else. Executives placed "improved sense of control," "customer’s digital savvy" and "ability to self-service" at the top of their lists, while consumers ranked "takes less time," "faster results" and "easier processes" at the top of theirs.

"We have seen a few of our clients go through levels of panic around declining measures of relevance," said Schwartz. They "have begun to understand that that's either because the experiences they have built, or the array of digital experiences they have created, are not aligned in a way to drive the kinds of brand value and brand perception they want." 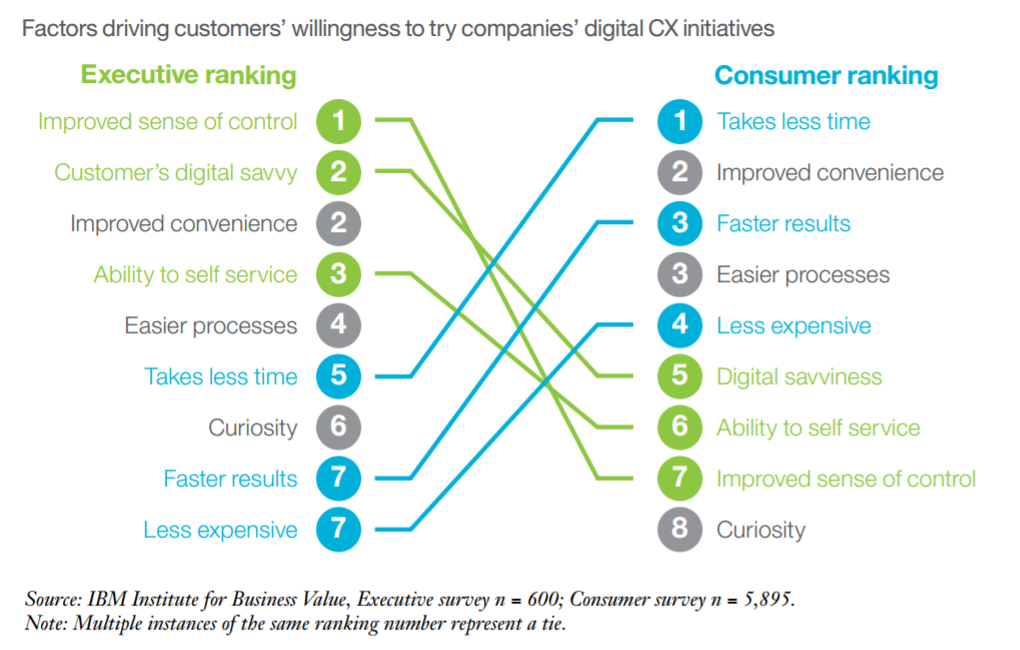 The study also found that executives have underestimated the role age plays in the adoption of digital experiences. Only 38 percent of executives surveyed said age would have an impact on adoption. However, the survey found that 63 percent of the people who said they were excited about these technologies were Millennials, 48 percent were Generation Xers and 39 percent were Baby Boomers. 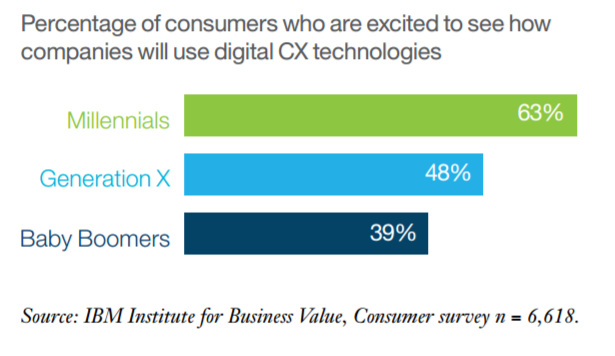 Carolyn Heller Baird, global research leader at IBV, said when marketing organizations are trying to determine their digital investments, they should consider what makes the customer interaction worthwhile. "The question becomes," she said, "what are you going to introduce into the experience that can fundamentally change, or eliminate the pain points, that customers are having in traditional channels?"

How Knorr's 'Love at first taste' bonded the brand with millennials