The Internet Advertising Bureau has launched a £3m consumer-facing ad campaign to educate the public about how behavioural advertising works.

Activity from the "Unzipped" campaign launches today and features a zip alongside statements such as, "How do websites know which adverts suit your interests?" and, "Find out what goes on behind the ads you see online." 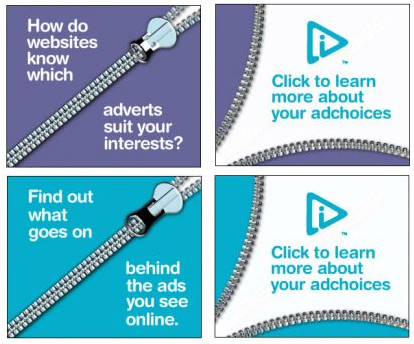 Creative by Mediacom shows the zip opening to reveal the blue triangular 'AdChoices' icon (right), which has been appearing on behavioural ads in the UK and EU markets for over a year.

Consumers can click on the ad to learn how their privacy can be safeguarded and watch a short video that aims to help people understand "interest based" advertising.

The icon sits at the heart of a pan-European self-regulatory programme, backed by the European Commission and the UK Government, which seeks to enhance transparency and consumer control in behavioural and interest-based advertising.

Businesses across the UK and Europe have been rolling out the icon during the past 18 months, but the UK is the first to launch a consumer-awareness campaign around the initiative, with other EU markets "expected to follow shortly".

The based campaign will run throughout the summer, with the majority of activity happening in the first six to 10 weeks.

Twitter to use web browsing history to target promoted tweets

Only one in ten UK retailers has tablet-optimised site, says IAB