As the industry gathers in Cannes to celebrate the best of the world's creativity, Campaign's global editors pick their favourite ads of the past year.

Nike’s "Nothing beats a Londoner" is a true visual feast, a rare treat in advertising – and the fact that you want to watch it repeatedly sets it apart from anything else I’ve seen recently.

At its launch in February, Paddy Treacy and Mark Shanley, the Wieden & Kennedy London creative directors behind the work, described how it flips the traditional model of focusing on the celebrities to hold kids up as the inspiration for all – "championing them, their spirit and incredible athlete mindset".

This film is funny without trying too hard, but is also made poignant by the fact that the vignettes are based on true stories, with each Londoner getting their own piece of music to make up an epic soundtrack.

So much is packed in that there is more to see and hear every time you watch it – the mark of a great film, commercial or not.

The campaign went viral the day it launched, with London mayor Sadiq Khan among those sharing it on social media. A legal dispute about the use of already-trademarked "LNDR" meant the ad was pulled while the issue was resolved. But so strong and lasting is the impact of this film that it remains fresh in the mind. In fact, I’m just going to go and watch it again anyway.

I’ll leave the last word to super-fan, MRM Meteorite chairman and chief creative officer, Nicky Bullard: "If we want to produce work like this, we all have to try much, much, much harder. Amazing."

KFC UK gives a masterclass in how to apologise 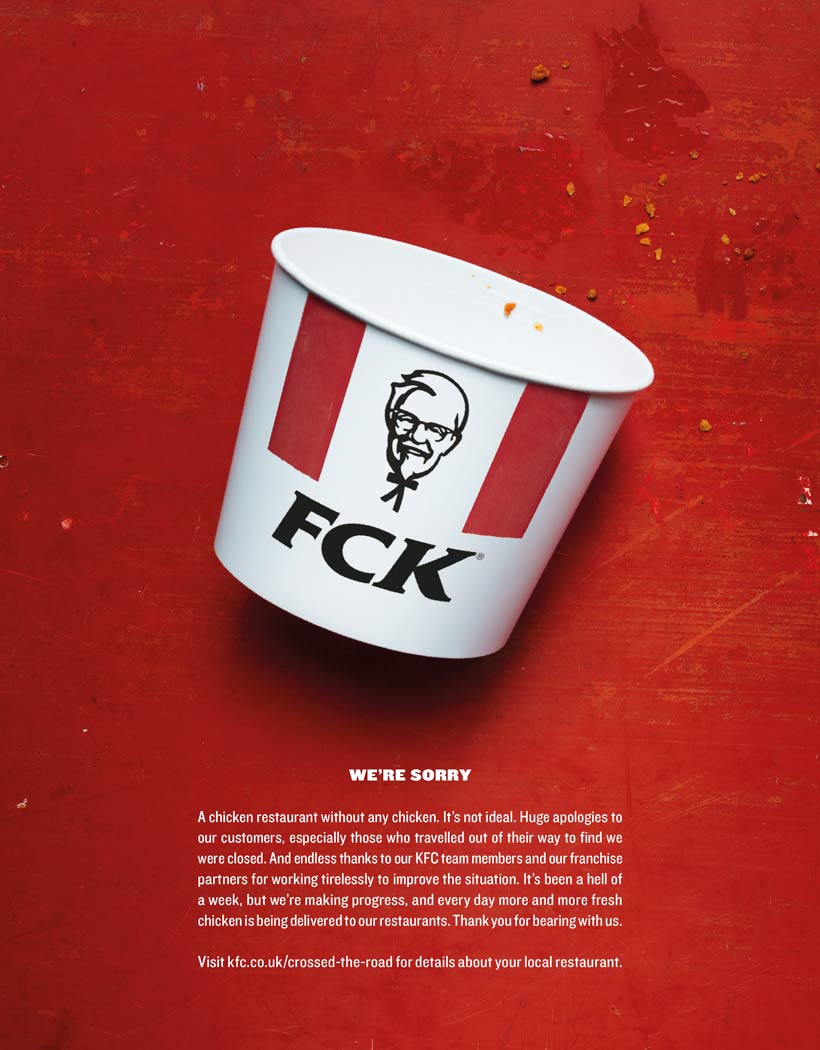 Earlier this year, KFC found itself hit by logistical Armageddon. It had no chicken.

Hundreds of its outlets had to pull down the shutters temporarily, loyal consumers took to social media to vent their anger and frustration and rival fast-food chain Burger King cashed in with offers for disappointed KFC customers.

Time to activate the KFC "what to do in a crisis" protocol. Except that I’m pretty sure the prepared corporate protocol was screwed up into a ball and tossed aside in favour of a wonderfully honest and engaging mea culpa that will have won back disgruntled fans and earned some new ones.

In an heroic display of bravery and trust, KFC ran a dazzlingly simple, brilliantly bold press ad by Mother that said everything in three letters: the three letters of the KFC logo, just not in the usual order.

It was a masterclass in crisis management. And it was a powerful demonstration of the impact that a smart, clean, well-crafted press ad can still have among the cacophony of bland commercial noise.

Paper company Double A worked with the band OK Go – famous for its ultra-elaborate videos – to make a dramatic statement about the quality of its everyday product.

The band members performed their track Obsession (in slow motion) against a backdrop
of 567 printers delivering an awe-inspiring cascade of coloured paper. Apparently not one sheet jammed during the project, which took more than two years of preparation and involved Hakuhodo unit Six Inc, along with celebrated Japanese media artist Daito Manabe and choreographer Mikiko.

It’s a brilliantly simple idea, made extraordinarily complex and then rendered to seem effortless. The fact that a paper brand facilitated this piece of entertainment is proof that any company, regardless of how mundane its products may at first seem, can produce something genuinely interesting – if it puts its mind to it and is prepared to give the most talented people creative freedom. And in case you’re worried, all the paper was recycled, with a donation made to Greenpeace.

When every ad is a Tide ad, it’s comedy genius

With four cheeky 30-second spots, the detergent brand dominated all commercials during the big game by explaining that every ad is actually a Tide ad – just look at all those clean clothes. Actor David Harbour, known for his role as police chief Jim Hopper on Stranger Things, realistically and wittily re-enacted well-known commercials just to flip them on their head. Just your typical beer spot with a Clydesdale (ahem, Budweiser) or an insurance ad? Nope, it’s a Tide ad.

Tide and Saatchi even parodied Old Spice’s famous "The man your man should smell like", featuring the fragrance ad’s star, Isaiah Mustafa, on a horse, as well as last year’s sexy P&G Mr. Clean spot – but this time Harbour was the one dancing around while cleaning.

The effort, which included support from Omnicom’s Hearts & Science, also tapped into social media and posted arguably the best tweet of the night. During a brief second-quarter blackout, Tide tweeted: "Clean clothes are still clean in the dark. If it’s clean, it’s a #TideAd."

Between the self-aware commercials, Harbour’s comedic delivery and the brand’s quick-thinking on social media, Tide turned heads and made an old-school detergent brand look fun and cool.

A story about an angry young man on the streets of Manila, who turns his life around after becoming a father to an abandoned child, sounds like it might be overly manipulative. But this moving film for Vicks by Publicis Singapore succeeds, in part because it’s based on a true story and in part because it deftly explores interesting cultural territory.

We don’t often see people who live in poverty in advertising, let alone see them being portrayed in such a humanising way as they are here. We also don’t often see Asian men getting in touch with their nurturing sides.

The brand has been mining the "Touch of care" motif for a couple of years now. This spot isn’t quite as confrontational as an earlier one from India about a transgender parent (which won Bronze at Cannes last year), but it challenges the status quo nonetheless. In a region where many kids are trained and tutored more than they are touched (especially by their dads), the brand’s focus on the importance of emotional bonding via affectionate physical contact qualifies as risky indeed. •

Anomaly's Carl Johnson: 'Most agencies are fucked up by fear and ego and greed'

Nick Law: 'We've gone from arrogant to under siege. It's a strange overreaction'

If fear is fuel for creatives, be very afraid

How KFC trolled the clean-eating trend for disruptive burger launch