The past 12 months have revealed an industry in transition, battling to stay relevant in a changing commercial and creative climate against the backdrop of volatile economic and political conditions, client rumblings, vanishing agencies and leadership culls.

The UK’s showing at Cannes, which proved a vast improvement on last year, belied an industry that, in large parts, still seemed to be struggling to adapt and respond to a changing commercial and creative environment. So 2018 was a year of flux.

That’s not to say that the threats were vastly different from those of the previous 12 months. But the wholesale changes in agency management (and, in some cases, the disappearance of agency brands altogether) shows that ad agencies in particular had, at best, failed to anticipate the rate of change and, at worst, failed to act on those threats. Surgery began in 2018, and some of it was brutal.

A glance at a Campaign feature from less than two years ago on the so-called "New breed of agency chiefs" revealed that this "new breed" was not quite as resilient as expected. As Campaign went to press, of the 11 people photographed for the piece in early 2017, four had left their roles, one had left but is back as head of a merged entity, and another awaited news of the fallout of his own consolidation.

Hitherto, change had not been happening at a quick enough pace but this year it seemed to speed up, as agencies grappled with programmatic, in-housing, legacy structures and falling margins, sparking attempts to reduce their cost base. Some people decided the new pace of advertising might no longer be for them; others weren’t given a choice.

The most visible instances of this happened within the agency C-suites but, in reality, cuts were being made across departments. The year was littered with departures that shocked. These included Guy Wieynk from Publicis, Cilla Snowball from Abbott Mead Vickers BBDO and Dentsu Aegis Network’s Jerry Buhlmann. In between, there was everyone from Bartle Bogle Hegarty’s longstanding chief executive, Ben Fennell, Publicis London’s Karen Buchanan, Ogilvy’s Charlie Rudd and Fallon’s Nick Bell.

WPP seemed particularly prone, and the merger of VML and Y&R, which in the UK was effectively a takeover, left blood on the carpet tiles of Greater London House in the names of David Patton, Paul Lawson, Jonathan Burley and Katie Lee. At the end of November came the merger of Wunderman and J Walter Thompson. It was good news for Mel Edwards, who became Wunderman Thompson’s chief executive.

As for the goings-on at Ogilvy UK, they became a mini-saga in their own right, as new chief executive Michael Frohlich tried to create a single P&L. Having gone through the pain of creating a unified structure, he promptly offered everyone at the agency the option of redundancy.

The merger of VML and Y&R, which in the UK was effectively a takeover, left blood on the carpet tiles of Greater London House

But the biggest news of the year was, of course, the exit of Sir Martin Sorrell from WPP in high dudgeon, which appeared the clearest manifestation of the uncertainty at the holding companies. While new CEO Mark Read was left to try to make sense of the many-headed monster that WPP had become, the other holding companies were also caught by falling market capitalisations and shareholder uncertainty.

So does this reflect a huge lack of confidence? Well, that depends who you talk to. The macroeconomic and political climate looked volatile – the visibility for ad forecasting was obscure while the long-running Brexit debacle hardly filled either agencies or their clients with much cheer or clarity. And while the creative output – and the mood on the Croisette at the streamlined Festival of Creativity in Cannes – was slightly better than last year (maybe the absence of Publicis Groupe agencies made the queues at the bar shorter), prayers said at the altar of data still appeared to be the order of the day.

Procter & Gamble’s chief brand officer, Marc Pritchard, saw fit to throw in his own two pennies worth and further unsettle an industry that always answers "how high?" when asked to jump, when he made a pronouncement about the shape of ad agencies’ departments.

"Too many suits, too few creatives" was the gist of a speech that he was so pleased with he delivered it twice – the irony of this was not lost on those same agencies who had struggled to get the FMCG giant to buy any decent work. In public, though, they all came out nodding their heads in agreement.

Vodafone was also making noises that weren’t necessarily music to the ears of agencies when it announced that it was taking swathes of its media business in-house.

Later in the year Bayer expressed similar aspirations to achieve the same with its digital media by 2020.

While the issue of transparency has always been more acute Stateside, stories about ads appearing around off ensive – and on occasions illegal – content on YouTube only helped to show that Google and some media agencies were not always operating to the highest standards.

But perhaps this move wasn’t such a bad thing in the round. Clients wanting to take back control of media and be more reactive to the the needs of their customers and supply chain is nothing particularly new – technology now allows them to do so and there are opportunities for those agencies that are willing to help them. After all, creative talent comes at a premium, and agencies such as Oliver and The & Partnership have already been offering to "in-house" creative talent at a price. The fact that the BBC and Channel 4 both produce outstanding creativity might act as a sort of blueprint, although, of course, it is tougher in more prosaic organisations.

Further evidence, if any were needed, of the changing face of UK advertising came from Uncommon Creative Studio, which came out of the blocks with a strong ad for Ovo Energy. Meanwhile, David Abraham, founder of St Luke’s and chief executive of Channel 4 until last year, launched one of 2018’s few start-ups, with Wonderhood Studios. A combination of a production studio making long-form content and an ad agency working for brands, it could prove to be a compelling offering. Indeed, this "studio" epithet certainly seems to be catching on as a better, more modern descriptor of an agency’s function, bearing none of the hindrance of legacy structures that the latter implies.

Media owners, too, were going through change. Sky was bought by Comcast, earning its shareholders £30bn. The radio giant Global went on an audacious expansion plan, taking over Exterion Media, Primesight and Outdoor Plus, propelling it to the position of second-largest player in the out-of-home market behind JCDecaux. The deals, estimated to be worth upward of half-a-billion pounds, reduced the UK OOH market from six main players down to four. The implications for staff have yet to be felt.

In terms of diversity, there was some progress but also some eyewatering discrepancies when agencies published their gender pay gap figures. This proved to be particularly embarrassing to J Walter Thompson London, which had generated a huge amount of publicity around its Female Tribes research but was then revealed to have the worst gender pay gap of any agency.

This embarrassment was compelled when affirmative action, combined with an incendiary use of words, resulted in threats of legal action between it and some former employees – straight, white British men – who saw themselves as discriminated against. What a mess. With the merger with Wunderman to occupy them, those at JWT will be hoping for a speedy resolution.

Aside from those people who left the industry, there were other more profound departures of those who may have shuffled off this mortal coil but whose memories and legacies endure. The 2018 industry roll call includes the acclaimed artist and BBH creative Gary Denham; former Toyota and Thames Water marketer Mike Moran; Eric Burleton, who started in the industry in 1938 and received the Mackintosh Medal in 1987; Paul Green, the media pioneer behind MBS; ex-McCain marketer Howard Mann; and the planning supremo Charlie Robertson.

The venerable WCRS agency brand is also leaving us to be replaced by that of its holding company Engine in 2019. For lovers of nostalgia it was a sad day but, in reality, it is unlikely that it was going to upset too many clients.

And so, as the year draws to a close, those chief executives who survived the great cull of 2018 can breathe a sigh of relief. Progress is hard – this year particularly so – but that doesn’t mean it’s not worth pursuing to make agencies and this industry fit for purpose. In fact, one could say it is quite an exciting challenge. And what of 2019? Probably more of the same. At least it’ll never be boring.

• Peter Scott left Be Heard Group, where he was chief executive

• Matthew Heath quit as chairman of Lida after 14 years

• Olivia Browne, managing director of Grey London, left the agency without a job to go to after just 12 months there

• Dale Gall, group chief executive of MullenLowe London, stepped down to pursue other opportunities outside the advertising industry

• Iain Jacob resigned as chief executive of Publicis Media for Europe, the Middle East and Africa

• Tim Doust, founding partner of FCB Inferno, said he was to leave the business

• Abigail Comber, global head of brands and marketing for British Airways, stepped down after a 26-year career

The work that made the headlines

Click on the image to see a larger version 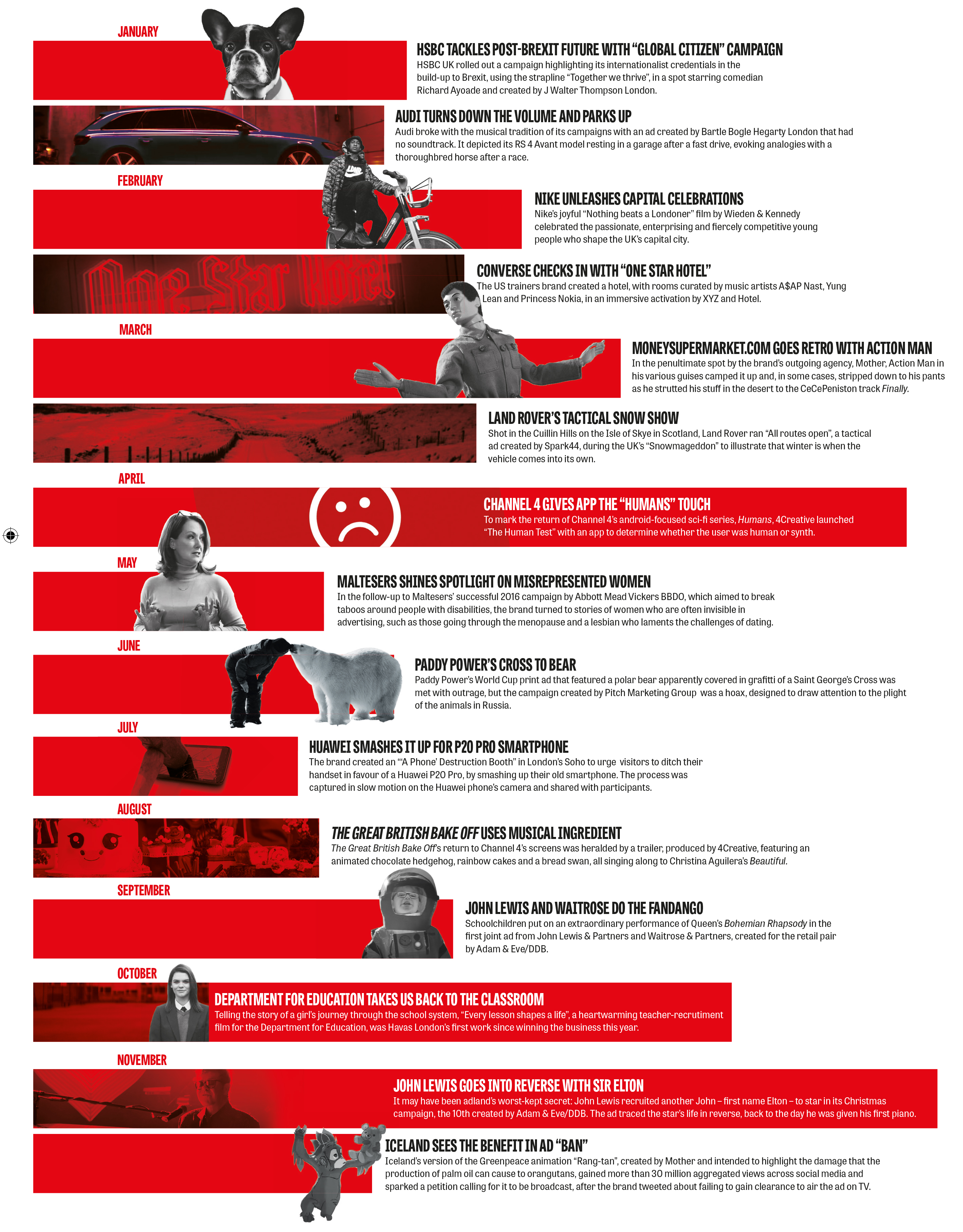 150 great ads we had something to do with

View from a garden: The necessary joy of fucking up

Jon Sharpe leaving VMLY&R is unsatisfactory all round