Campaign US rounded up the latest crop of holiday work.

Brands always get a headstart on holiday advertising, but this year the festive ads rolled in before people even put their Thanksgiving turkey in the oven.

According to SaaS platform AdImpact, holiday advertising peaked on November 14th this year, compared to November 29th in 2020. AdImpact also noticed 55,000 ads at the peak of the holiday season, an increase from just 39,000 last year.

This year’s holiday advertising ranged from heart-tugging shorts to hilarious spots — and even a bougie and a fancy Santa Claus.

Campaign US rounded up even more of our favorites below.

In this holiday spot by FCB Canada, an Air Canada pilot brings home a snow globe for her young son. The boy puts the snow globe next to a sand globe with a tropical scene. In the boy’s imagination, depicted by stop-motion animation, a man inside the first snow globe forges a bond with a woman inside the tropical globe. But the duo’s relationship is dampened by their distance.

The woman writes a letter to Santa Claus for some help, and she’s finally able to visit her new friend.

In “Holiday Ride,”  a four-minute film created by Commonwealth//McCann, an older man hangs a wreath on his car garage door. Inside is a 1966 Chevy Impala that’s worse for wear. The man gets inside and remembers gifting the car to his late wife.

His daughter asks local mechanics to fix up the car, which they quietly sneak away from the garage. The car is restored to its original glory, and the father calls it the “best Christmas gift I could ever have.”

The spot was directed by Tom Hooper (The King’s Speech, The Danish Girl), composed by Rachel Portman OBE with cinematography by Claudio Miranda.

Virgin Hotels’ “This Year, You’ll Come to Me”

The holidays are a time to relax with friends and family, but for Santa Claus, its busy season. This year, Santa is taking a well-deserved break with a luxurious stay at Virgin Hotels.

In one spot, by Joan Creative, Santa is sipping champagne at the hotel bar and ordering lobster.

“I was literally on my way, and then I was like, ‘It’s cold… why would I leave this place?’” he says. “And as much as I j’adore milk and cookies at yours, we deserve champs and lobster. This year, you come to me.”

“Nora’s Joy,” a CGI spot created by Conill, tells the story of a young woman who is afraid to share her joy. She eventually drives around in her Toyota Tacoma, releasing her holiday spirit as a flurry of bright lights into the sky.

Customers can send their own digital “joy jar” to loved ones through Toyota Latino’s Instagram channel until January 3. For every share, Toyota will donate to the Hispanic Scholarship Fund, which supports student scholars nationwide, up to a total of $50,000. 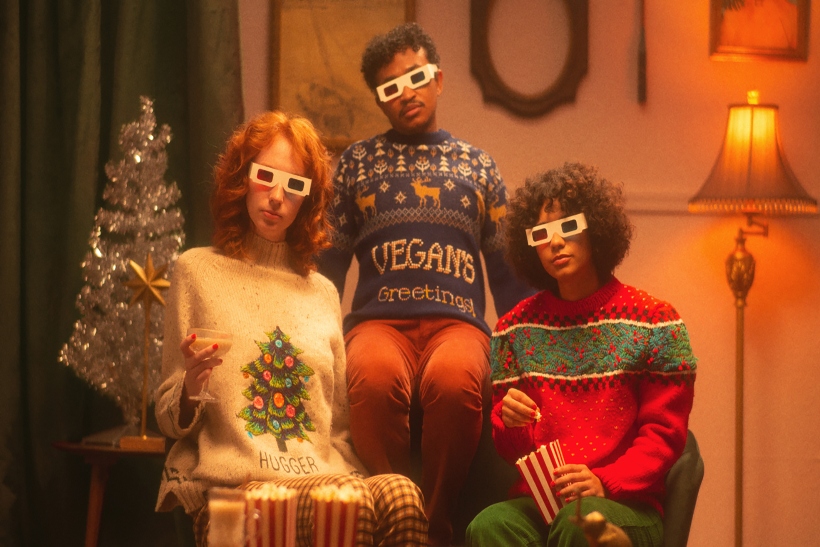 Oatly released a vintage holiday sweater collection, created in collaboration with knit artists. The drop was part of Oatly's second release of ReRuns, a U.S. initiative that upcycles materials into merch. The merchandise sold out in under an hour. Sweaters were priced at $125 with all proceeds going to the Lower East Side Girls Club.

Miller Lite released the first drinkable ornament, which can hold 8 oz. cans of Miller Lite beer inside. After enjoying a Miller Lite, the ornaments can be hung on Christmas trees using a tab and a hook. Comedian Jimmy O. Yang explains how to use the drinkable decor to spice up the holidays in a new spot.

A six-pack of Miller Lite Beernaments are $19.75 while supplies last. Beer is sold separately.

Santa Claus tries Milano cookies for the first time in the spot “Fancy Santa,” created by Saatchi & Saatchi New York. After getting a taste of luxury, Claus’ elf gives him a “Fancy Santa” makeover.

Their antics wake up a little girl who calls out, “Santa?” but the elf quickly corrects her: “Fancy Santa.” The new and improved Claus has a swanky new look complete with the little girl’s mom’s jacket.