Marketer introduces merchandise line that includes a $100 fountain and $50 jewel-encrusted bottle of dressing.

Today, which also happens to be National Ranch Dressing Day, Hidden Valley joins the food merchandise wave in launching its first online store: the Hidden Valley Ranch Outlet. Fans of the dressing can purchase quirky items like a $100 ranch fountain, a $50 "jewel" (they’re not real) encrusted bottle of ranch or a $30 t-shirt that reads "Peace Love Ranch."

The site is part of the brand’s "Ranch Out" campaign, launched in January to convince consumers to think of ranch as more than just a salad dressing, but as a condiment, too. The brand merchandise lets ranch lovers express "the many ways they love to dip, dunk and drizzle" the product, said Hidden Valley associate director of marketing Jacquie Klein. The brand also intends to celebrate the national holiday with a music video remake of Freak Nasty’s hit song "Da Dip" on YouTube and a social media-based sweepstakes  giving away a ranch resort getaway, a lifetime’s supply of Hidden Valley Ranch and more. 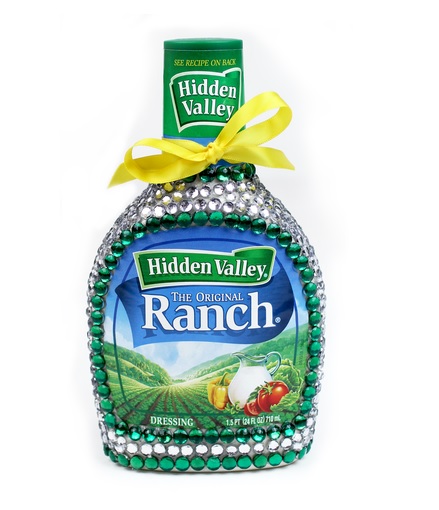 But it’s the tees that will give Hidden Valley the most brand awareness, said Alfredo Malatesta, CEO of foodie apparel company Flavour Gallery, which hosts the shop and designed the swag. "It’s still a challenge for brands, while they’re in the midst of doing everything, to see the value of putting a merchandising program in place because it’s just out of their wheelhouse," he said. "However, it’s very effective because for the consumer, it’s something personal. If they’re going to put on a t-shirt, it represents a lot, and it’s something that they’re going to promote on social media."

Klein echoed his sentiment and said she has every intention to keep the shop going indefinitely after National Ranch Dressing Day and "build on what we have" with new swag. "We were really trying to find designs that both celebrated the Hidden Valley brand but also celebrated just the fun of ranch as a product in general," Klein said.

Hidden Valley isn’t the only nationally recognized brand selling merchandise on the site. Brands like Barilla, Rachael Ray and Five Napkin Burger host their exclusive apparel lines on Flavour Gallery, too. Malatesta said the key to attracting foodie consumers is doing more than slapping a logo on a t-shirt.

"Most culinary-centric brands, they’re not really set up to operate their merchandise business the right way. It’s a foregone thought, like, ‘Oh, and we need some t-shirts, so let’s just make whatever we can, as cheap as we can, and see what happens!’" he said. "And they ultimately fail. But we took a different approach, which is let’s make really good quality stuff, add a design that makes the product look like it could sit on the shelf next to a cool pair of jeans at Nordstrom, and people are going to actually want to wear it and buy it."

The final product, Malatesta said, is sometimes a collaborative effort between the brand and Flavour Gallery, as it was with Hidden Valley, but some brands are more hands-off. Either way, the results go beyond basic company swag. One Barilla tank uses the clever pun "Fork Play," but the Barilla logo is limited to the label printed on the inside of the shirt. Hidden Valley tees feature its vintage logo and less obvious branding. 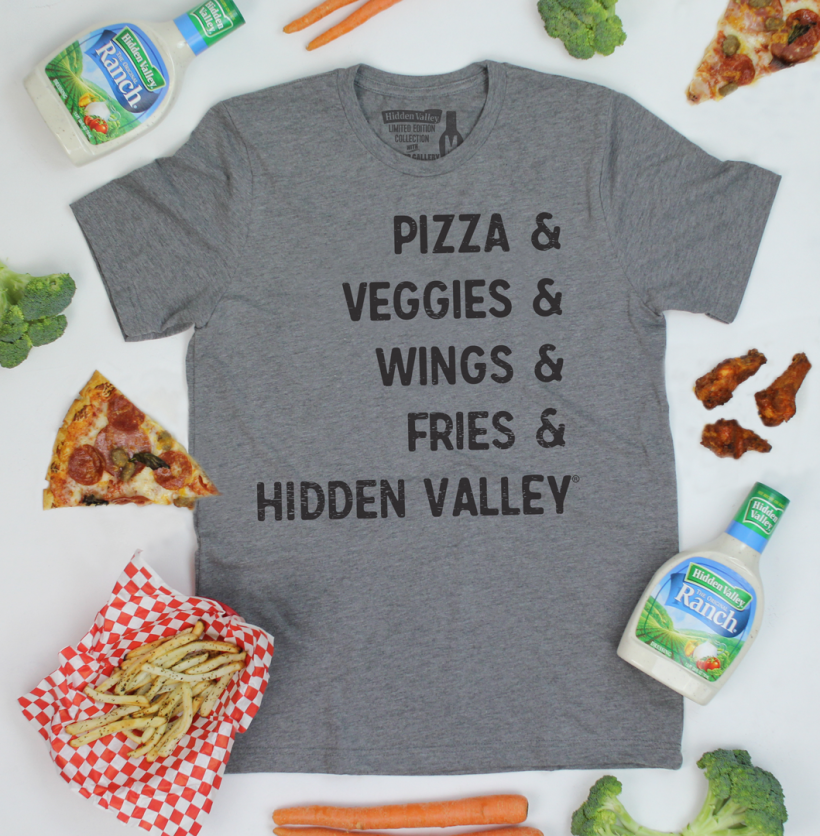 "Once you put the traditional logo on the front of the product, your chances of that being perceived as cheap, promotional swag, they increase dramatically. If you’re wearing a vintage logo, then that’s a different story," Malatesta said. "People just don’t want to look like billboards."

Two years ago, Hidden Valley introduced new flavors like Cilantro Lime and Buffalo to beef up sales, and it has the same hopes for its new store. "We see a lot of ways that people love to express their pride and love for Hidden Valley Ranch," Klein said. "We’re really wanting to encourage people to get creative and inventive with ranch in all meanings of that, whether it be wearing a t-shirt, having a ranch fountain at their next party or get dipping with our 15 flavors of ranch."

Liquid-Plumr becomes the butt of its own crack joke