Heineken and Coca-Cola are among the list of partners for Uefa's Euro 2020 fan experiences, with pop-ups in Trafalgar Square and Potters Fields Park.

These London activations are part of a festival of football that will take place across Europe between 11 June and 11 July 2021. As part of welcoming the festival, the family-friendly spaces in London have been designed for residents and visitors to "come together and celebrate".

The Trafalgar Square Fan Zone will open on 13 June for England's group stage match against Croatia and allow a crowd of 750 people, with social-distancing measures in place. If social distancing restrictions are lifted on 21 June, in accordance with the government's roadmap, up to 9,500 people will be able to attend each match screening thereafter.

Heineken and Coca-Cola, as the food and beverage partners, will have branding at bars. Adidas will have a giant match ball in Trafalgar Square for the semi-finals and final. Branding from food-delivery partner Just Eat will also be visible. 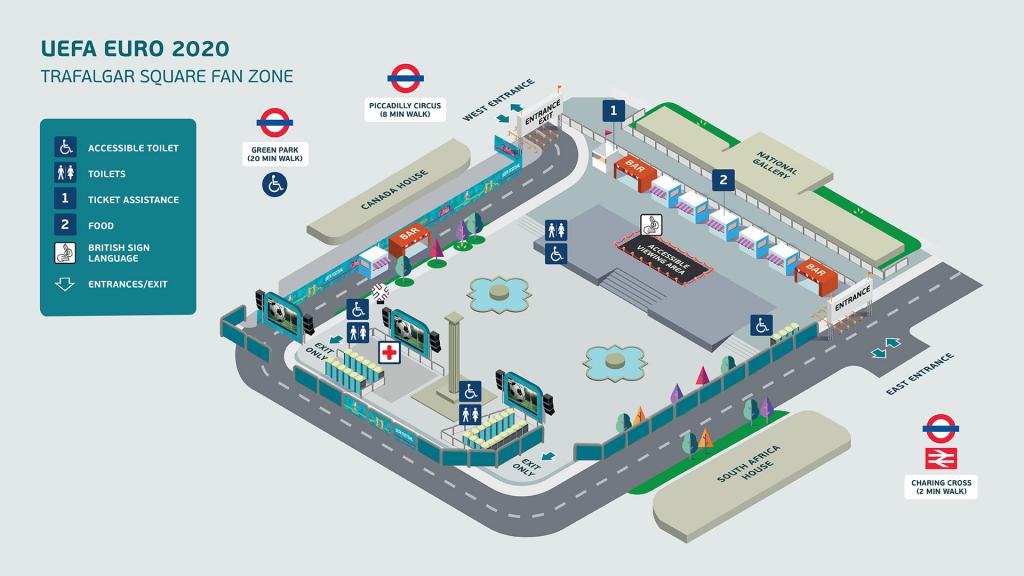 The fan zone will also host a community experience, with an afternoon of entertainment on 10 July, the day before the final.

Tickets are required for the zone and a free public ballot process for them will take place. Key workers from across London, including NHS and London Ambulance Service staff, police officers and transport workers will be offered access to watch England's three group matches as a mark of gratitude for their work during the pandemic.

In Potters Fields Park, located next to Tower Bridge, there will be a Football Village for the duration of the tournament. The venue is free to attend and plans include hosting cultural entertainment, sports and community activities, food and drink stalls and screens showing selected matches and highlights. No England games in their entirety will be shown at Potters Fields Park. It is designed as a space for families and local people to enjoy the summer, relax, and soak up the festival atmosphere.

There will be Heineken and Coca-Cola branding at the bars, while Just Eat will have some picnic-table branding and Adidas will again have a giant match ball. Fanatics, the official merchandiser, will have a stall onsite. Volkswagen, Hisense and Qatar Airways are also providing activation stalls. 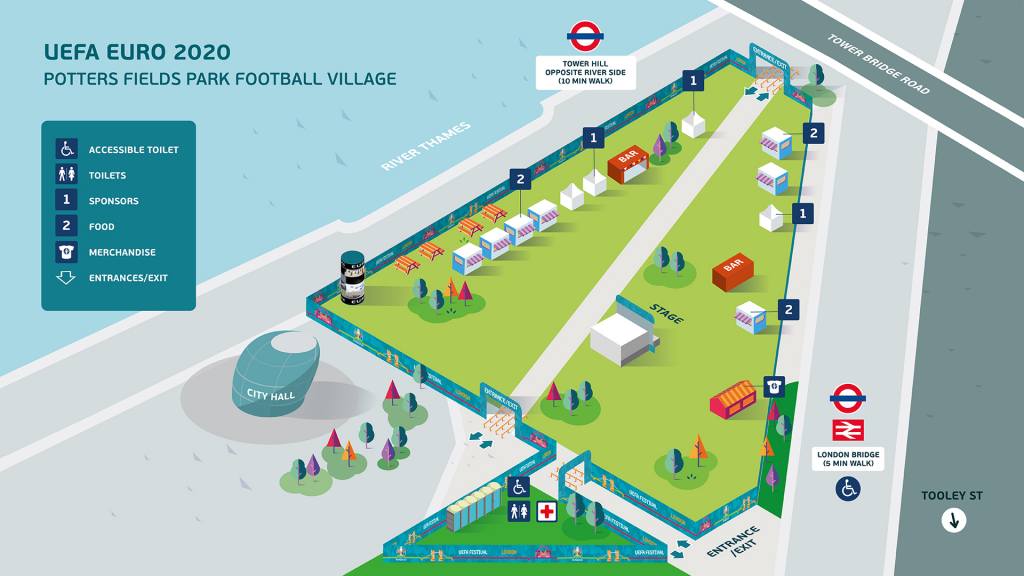 The Mayor of London Sadiq Khan said: "I am very pleased that we will be able to offer some of London's key workers – including members of the Metropolitan Police, TfL workers and NHS and London Ambulance staff – the chance to watch England's Uefa Men's Euro 2020 group matches against Croatia, Scotland and the Czech Republic in the Fan Zone on Trafalgar Square.

"If we continue to keep on top of the virus, we hope to be able to host up to 9,500 fans in the Fan Zone after the initial first two group games – and I cannot think of anything more exciting than thousands of people coming together to cheer the England team on to glory. Londoners have sacrificed so much during the pandemic and I am in no doubt that Uefa Euro 2020 can act as a real springboard for the capital's recovery."

Jack Morton is working for the Mayor's Office overseeing the project.

Euro 2020 will take place across 11 European cities, with eight matches, including the final and both semi-finals, to be played at Wembley Stadium. Glasgow's Hampden Park will also host matches.

How Heineken landed a delicious smackdown on the European Super League