Hearst Magazines UK is today unveiling a Cosmopolitan UK channel on Snapchat, in addition to the magazine title's global presence on the video sharing platform. 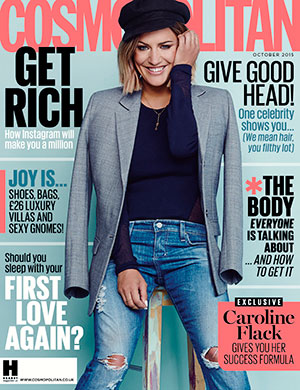 As part of a multi-million pound strategy to find new ways of connecting consumers with content, the launch of Cosmopolitan UK will be viewed as a prelude to its other titles, such as Good Housekeeping and Harper's Bazaar, joining Snapchat too.

Following the launch of its global Snapchat channel in January, the UK version will publish up to 12 stories a day on Snapchat.

The magazine will also undergo what the publisher calls a "dramatic" new-look in its October issue (on sale tomorrow), the first edition under the editorship of Farrah Storr, the former editor of Women's Health who replaced Louise Court in July.

The magazine will also be available in a 'midi' size format for the first time.

Storr said: "Women are more brilliant and more demanding than ever before and as a brand Cosmopolitan has to lead the charge.

"Everything about the new Cosmopolitan will be sharper, smarter and bolder than ever before because that’s what this generation of women are."

Cosmopolitan's Suzy Cox to be editor of Heat