A new survey finds most young dads don't recognize themselves in commercials. But a handful of brands are forging a path beyond the lazy cliches.

The trope of the hapless dad, unable to keep his children fed or his shirt clean, is an enduring one. But as fathers begin to take more responsibility for child care and housework — sometimes even forgoing employment outside the home altogether —  the image of the incompetent house husband is becoming less popular, even offensive.

It’s a sentiment particularly strong among the latest generation of fathers. A new study from Cassandra, a research company that studies modern youth, found that fewer than 1 in 5 Millennial parents in the US thinks ads accurately portray dads and their kids. According to research from the parenting web portal BabyCenter, only a quarter of fathers think ads show them doing their fair share of housework.

Getting it right is tough. As much as advertisers like to think they create culture, they are often playing catch-up, especially when social norms change quickly. "That idea of the dumb daddy who’s making mistakes and stumbling about blindly because he’s just clueless about how to raise his children is such an outdated concept," said Melanie Shreffler, senior insights director at Cassandra. Still, some brands are ahead of the curve, and their experiences offer a rudimentary road map for those who want to bring their creative into closer alignment with the dads of today.

Traditionally, fathers in ads were just men who happened to have children. They worked or came home to a delicious dinner or enjoyed finely-made luxury goods. As more women entered the workplace, the portrayal of fathers evolved into "Mr. Mom," the hard working domestic man who’s always out of his element— either the "bumbling dad where he’s kind of laughed at, or it’s Dad the Hero who, just because he was able to whip out a sheet of Bounty and clean up the mess is now the greatest person on earth," Shreffler said. "Look, he did it!"

But the modern father views himself as not just competent, but skilled, solving domestic challenges with ingenious "dad hacks," Shreffler said. "They’re not trying to be Mom. They’ve found what works for them, and if it happens to be doing their daughter’s hair with a vacuum cleaner and a ponytail holder, so be it."

They also identify as caring and sympathetic and want to forge different, more intimate relationships with their children than previous generations had. "There are a lot of dads doing that now, and they need role models," said Neil Barrie, chief strategy officer of TBWA\Chiat\Day LA. "They need that to be seen as a cool thing to do." Brands and marketers have the opportunity, he said, to "empower men to take more of a leadership role in the house, celebrating that as something that enhances masculinity rather than dilutes it."

Barrie cited a BBH London ad for the juice brand Robinson’s, which shows a dad and his son as best friends, and Honey Maid’s "Dad & Papa" work by Droga5, which profiles the life of two same-sex dads and their son.

Since February of this year, Hershey’s "My Dad" spot by Arnold Worldwide has racked up 2.8 million views on YouTube. An enterprising daughter creates a lifelike facsimile of her father so he can play hooky from work to spend more time with her.

"It resonated with so many fathers (and mothers) because we've all been there," said executive creative director Mathew Jerrett. "We've all had to sacrifice spending time with our kids for work."

"This story was a subtle push to find a little more time together every day, to inspire people to look for the little things and happy moments," added executive creative director Timothy Flood.

More recently, Angel Soft released a Father’s Day spot by Deutsch that featured a dad who emigrated from the Philippines to earn money to send back home to his children. "Mr. Rayos," a middle-aged, leathery man tears up when talking about the family members he hasn’t seen in years.

These days "you do see dads that are bumbling," said Melissa Langston-Wood, a creative director at Deutsch who worked on the spot. "But we felt like we wanted to portray something that was authentic and genuine." That meant showing a man with vulnerabilities, said Kelsey Hodgkin, group strategy director at Deutsch. Men no longer want to see other men "humblebragging."

"I think people are actually really tired of pretending that everything’s perfect," she said. "There are some fundamental challenges with parenting, and the more you share them, the more everyone can recognize that we’re all in this together."

The video has garnered 1.3 million views on Facebook, driving home for Deutsch "how much appetite there is for a more multidimensional conversation around fathers and parenting," Hodgkin added.

Being able to view fathers as more complicated creatures who can be both sensitive and manly is part of a standard evolution, according to Shreffler. "If you think about it, the same things happened with single moms. She had to be tough as well as being in the sensitive, caring Mom role. We’re just now getting around to saying Dad can be both of those things at the same time too."

But the end goal for dad-positive advertising might be its demise, Barrie said. He points to TBWA’s campaign for Airbnb, "Live There," which featured images of families on vacation. One image in the series shows a father asleep in a hammock with a toddler on his chest. Another shows the two swimming together. "It’s partly about just showing fathers taking a strong role, but that’s not the subject of the thing in question," he said.

The best, most progressive ads aren’t aimed at portraying fathers in a good light, but normalize good parenting. "That wasn’t a campaign about dads or dad’s roles," Barrie said, "but just examples of natural, cool moments." 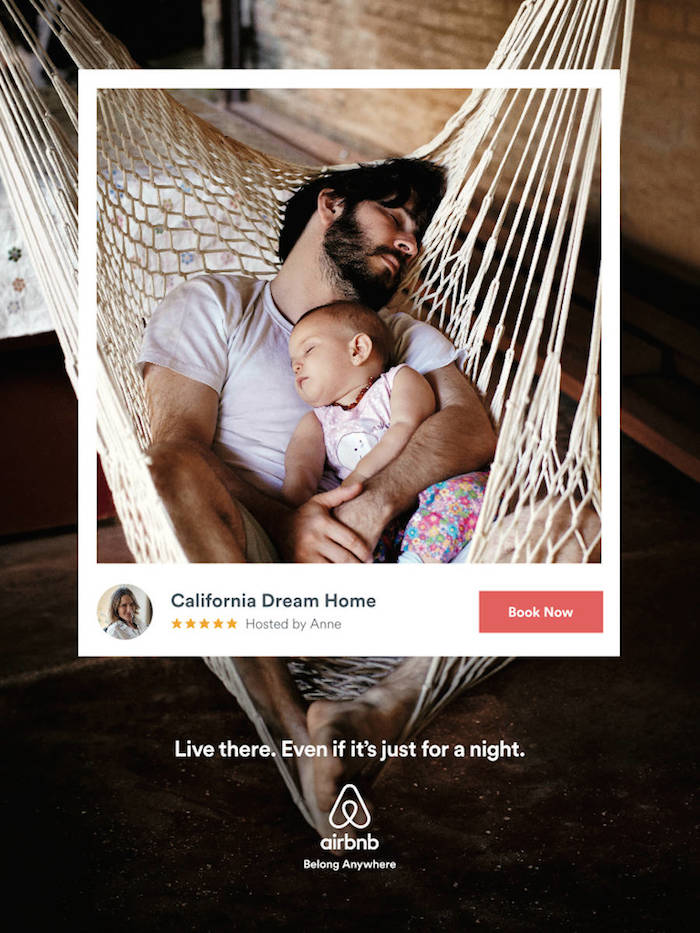 The stay-at-home dad is long overdue for a rebrand

Will ads ever stop patronizing women?

Marketers should wait 30 days before trying to make a mark