Target, Gap and Toys 'R' Us are among major brands rethinking their approach to marketing to boys and girls 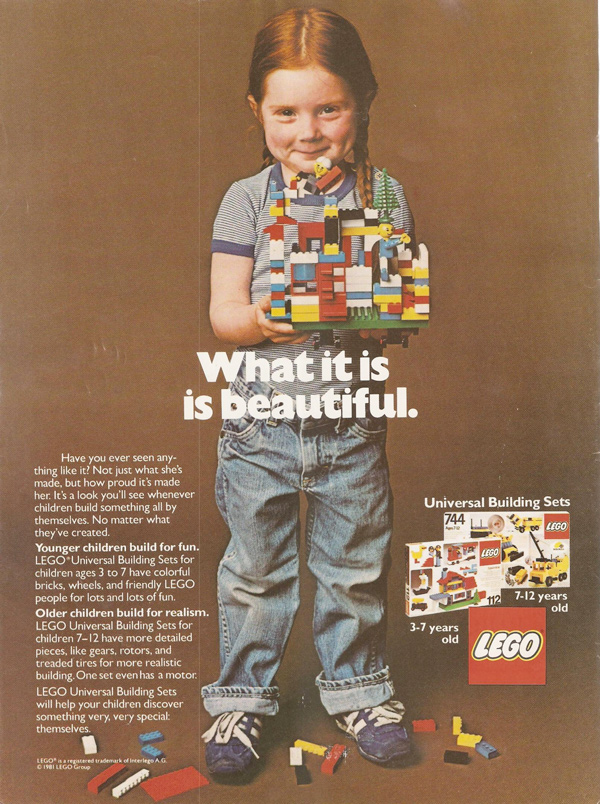 There was a time when it made good business sense to divide toy advertising along gender lines. In the 1980s, the advent of cable TV — particularly kids’ channels like Nickelodeon — spawned countless new opportunities to advertise directly to children. But segmenting kids is hard, and "gender was the low-hanging fruit," said Rebecca Haines, a media studies professor at Salem State University and author of The Princess Problem: Guiding our Girls through the Princess-Obsessed Years.

Thus began an age of kids’ marketing hyper-focused on gender. Take, for example, the shift in Lego’s advertising during this period. As this now-famous ad from 1981 shows, the brand used to advertise to kids without regard to gender.

Contrast that with this 1994 commercial for Lego Belvile, the brand’s first foray into gender-specific marketing. (One guess which gender the company is aiming for here.)

But today, with gender issues taking center stage in American culture, from LGBTQ rights to same-sex marriage to equal pay between sexes, the business case for gender-bifurcated ads is disappearing faster than golf clubs that don’t admit women. As Millennials become parents, and research increasingly shows the damaging effects of segregating children based on gender, calls are growing louder for gender labeling to be removed from kids marketing all together. Today, pressure groups like Let Toys Be Toys have grown not just in size but global influence.

"When you put children into small boxes based on gender, you are essentially missing out on the much bigger picture," says Jo Jower, a volunteer and spokesperson for Let Toys be Toys. "If you decide as a parent or business that girls are only interested in pink and glitter and domesticity, you are basically excluding a group of girls who aren't into that and also sending a message to boys that they can't like those things either — so you are limiting the market," she says.

Defining the new normal are brands like GoldieBlox and Roominate, which are taking over the toy aisles with advertising that eschews or outright defies gender stereotypes. GoldieBlox is a construction toy created to get girls interested in engineering from a young age, with the aim of plugging the gender gap in science, technology, mathematics and engineering (STEM). Since its 2012 launch, GoldieBlox has rolled out a series of ads that show girls rejecting the princess trope have racked up millions of views on YouTube; in 2014 it was even able to muscle in on the Super Bowl, after winning a competition by Intuit which bought the media. In 2013 Toys R Us starting stocking the toy.

Roominate shares a similar mission to make STEM subjects more appealing to girls, building, wiring and programming toys, to promote cognitive development and spacial skills. After a successful Kickstarter campaign that raised triple its funding goal, and further investment from Shark Tank, Roominate has been attracting plenty of press attention and last year was named Time's best toy of 2014. Earlier this year, it rolled out it's #LetGirlsBuild campaign with a video featuring women in STEM careers.

Major toy companies and retailers are also paying attention to this cultural shift, suggesting it’s more than a niche movement. Earlier this year, Target started to phase out gender-based signs for children's products in its stores in response to frustrations and complaints from customers. The retailer follows in the footsteps of Toys ‘R’ Us, which does not categorize its toys in stores, either. In Sweden, store Leklust has taken this issue a step further, featuring gender-neutral images in its catalog, such as a child in a Spiderman costume with a pink stroller, girls with toy guns and boys playing hairdressers.

The de-gendering of kids advertising isn’t limited to toy companies. Gap is taking the girl empowerment route to advertise its new girls collection, which was developed in partnership with Ellen DeGeneres. The line has been designed with gender-neutral colors and styles to target "every girl." The ad campaign features girls enjoying pursuits that are not stereotypically girly, such as skaters and a rock-loving girl drummer.

Of course, some companies have been struggling for years to strike the right tone regarding gender in their advertising, showing it’s sometimes easier said than done. Mattel has been trying since at least the 1980s to advertise Barbie without resorting to stereotypes—to varying degrees of success.

The brand’s 1985 campaign, "We Girls Can Do Anything," was hailed as progressive at the time, but could be seen as patronizing by today’s standards. And as recently as last year, Mattel was forced to apologize for a 2010 book that portrayed Barbie as a computer engineer who could only program with the help of men.

The latest Barbie commercial shows girls performing a series of professional roles, including a college professor, soccer coach and a business traveler, with the line: "When a girl plays with Barbie, she imagines everything she can become." The strategy behind the campaign is to remind parents what the Barbie brands stands for, which is the fact that women have choices, explained Kristina Duncan, VP of Barbie Marketing Communications via email.

"The tone and manner of this initiative is the shift. We really want to reconnect parents with the purpose of the brand. The creative puts forth a more modernized Barbie narrative for the next generation," she said.

This time, there is reason to believe Mattel got the messaging right.Data from Ace Metrix, a sentiment analysis tool that measures viewers’ reactions to video ads, show the ad got the highest ever likability and attention scores compared to the toy category. It also had an extremely high emotion score of 92, compared to a category norm of 59, the data show. With Barbie sales in decline, the company will be hoping its female-empowerment message gives the brand the much-needed shot in the arm.

New toy companies like GoldieBlox are hoping to avoid such decades-long course corrections by getting the gender issue right from the outset. But as with all business trends spurred by social change, brands must be careful not to look like they’re cashing in on a movement. Parents looking to buy gender-neutral toys might be "skeptical" of companies like Mattel, says Hai Tiet, founder of gender-neutral toy ecommerce site Woozy Moo. For this reason, his store only sells products from companies that prioritize gender equality across the business, such as those with female leadership like GoldieBlox.

Woozy Moo, like Target, has experienced backlash over its genderless stance from parents who do not believe in the mission. But Tiet believes gender-neutral toys and marketing will become the new normal soon enough. Meanwhile brands that don't get on board will risk getting left behind. "Some people feel like it's bourgeois, high-cultured, or it's something weird for them. But once people get used it across all levels of society, culture and class I think that will die down," he says.

GoldieBlox encourages girls to be like Hillary Clinton and Serena Williams

Anatomy of a stigma: Will American boys really embrace dolls?

The 10 Essential Advertising People of the Year: No. 10 Lisa McKnight

Playing devil's advocate with Barbie and her new body types

How SuperAwesome is building the global infrastructure for digital kids' advertising

It's almost 2016: Do you know what your children are watching?

Why marketing apps to kids is still largely unregulated

'Smart' web-connected toys can talk, but will they be able to teach?

Can Toys 'R' Us bring discipline to toddler unboxing videos?

Socially responsible advertising: A marriage proposal between science and marketing

Can a 3-year-old recognize the Target logo?