The Guardian has unveiled a new masthead and will unveil a redesign of its website and app to complement its print relaunch as a tabloid on Monday, 15 January.

In typical "Fleet Street" fashion, the relaunch has been a closely guarded secret but today Kath Viner, the editor, tweeted a 30-second promotional video, made by ad agency Karmarama.

Very excited to be sharing a new look for the Guardian with readers this Monday... pic.twitter.com/zmIDK1CxUM

The teaser ad, which features a blank, tabloid-sized white shape in the centre of the screen, is voiced by actress Maxine Peake.

Ad industry sources warned the publisher will take a significant hit on its estimated £20 million a year in print ad revenue if as they expect the new-look paper will no longer carry a full-page ad on the outside back cover on weekdays, although it should stay on Saturdays.

In another blow in terms of ad sales, it is likely that there will no longer be any ad space on the front page.

New editorial content is thought to include a pull-out section in the centre of the tabloid paper – in addition to the features section, G2.

At least one and perhaps two new magazines or supplements are also expected to debut in the revamped Saturday paper.

The redesign of the website and other digital properties should make them feel similar to the tabloid.

Sister paper The Observer is moving to a tabloid format on 21 January but the redesign of the Sunday title is expected to be less far-reaching.

Guardian News & Media, the publisher, declined to comment on any changes.

GNM has ditched the distinctive Berliner size after just over 12 years and outsourced the printing of the tabloid to Trinity Mirror in a cost-cutting move.

One agency source estimated The Guardian will see a double-digit percentage decline in print ad revenue but expects it will be more than offset by the savings from printing.

The Guardian’s commercial team is planning a promotional blitz, which is said to include distributing up to 50,000 extra copies at targeted locations such as train stations next week.

The Guardian will also be handing out copies of the tabloid and free coffees and breakfast pastries outside the offices of leading media agencies. 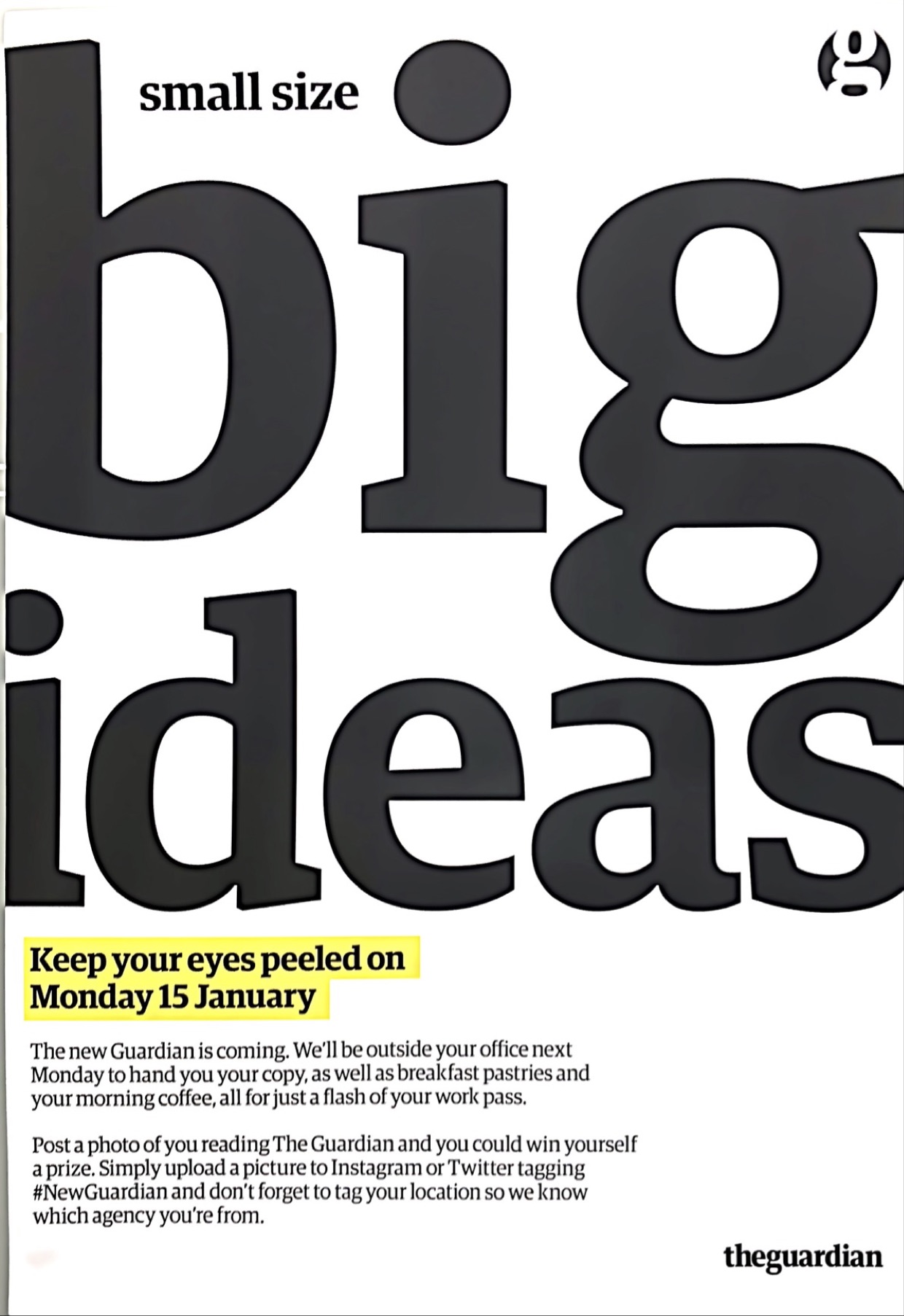 Viner, the editor since 2015, told Radio 4’s Media Show last month that the move to tabloid "saves a lot of money" but it will have "the same amount of journalism – the cost savings are all in production and printing processes".

She said she planned to "keep quite a lot the same" in terms of editorial content "so that loyal readers aren’t too discomfited but at the same time you want to throw in some surprises and do some improvements".

Viner went on: "I think the role of a newspaper in people’s lives is changing all the time – the role of a tangible, physical object in a digital world is really interesting to think about what it’s for.

It is thought the resdesign has been carried out largely in-house by Alex Breuer, the creative director, and his team.

GNM said it worked with Karmarama, the Accenture Interactive creative agency, on the promotional video and "the main campaign concepts".

BBH has previously worked on The Guardian’s creative and PHD has handled media.

The Guardian moved from broadsheet to Berliner in September 2005 and the new design won critical acclaim.

But industry experts warned at the time that The Guardian was taking a risk by investing in Berliner printing presses because no other publisher was likely to use them given their unique size – a major problem when it came to generating printing revenue from third parties.

The Guardian’s print circulation has more than halved, from 404,000 at the time of the Berliner launch in September 2005, to 147,000, according to monthly ABC figures.

The online audience for TheGuardian.com has grown hugely during the last decade and it claims in the region of 140 million monthly unique browsers.

The company and its parent, Guardian Media Group, have been heavily loss-making.

GMG wants to break even at an operating level by the end of its 2018-19 financial year.

The publisher, which has avoided putting up an internet paywall and launched a reader membership scheme to reduce dependence on digital advertising, announced last October that it has 500,000 "regular, paying members".

ESPN, FourFourTwo and Guardian team up for Russia World Cup