The brand campaign positions the publication as a challenger brand.

The Guardian is marking its 200th anniversary with a campaign touting its role as a “work in progress” challenger brand.

Created with in-house agency Oliver, the campaign centres around the line: "A work in progress since 1821." It focuses on The Guardian’s independent ownership and progressive voice while encouraging more readers to support the publication.

Starting on the anniversary date of 5 May, the work will run for four weeks across The Guardian’s digital platforms and apps, social media channels, including Facebook, Instagram, YouTube and Twitter, and 230 outdoor executions in London and Manchester. The billboards include lines such as, “The cat among the pigeons” and “Reader funded not billionaire backed”. 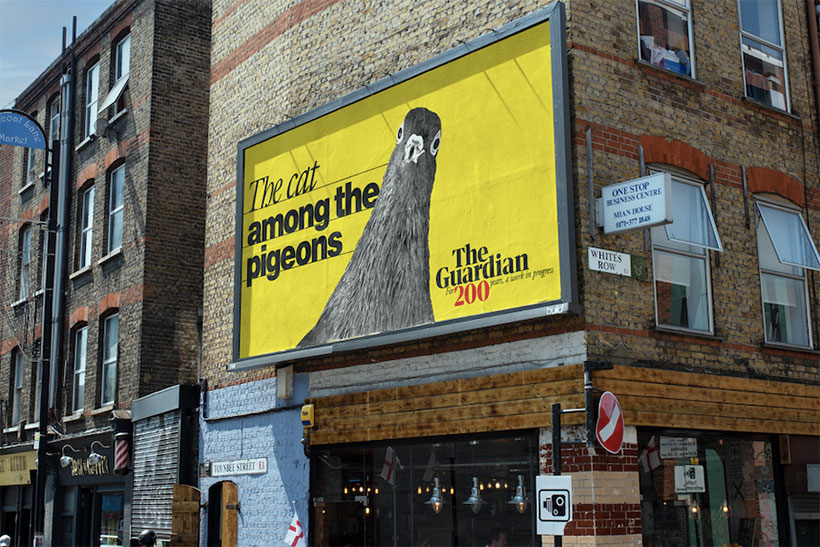 Three films, produced by Independent Films, explore the idea of progress as it relates to the environment, equality and humanity. They are voiced by the late author Ursula K Le Guin, former Observer journalist Alan Ross, and English poet and author Salena Godden.

There will also be ads on podcasts such as Reasons to be Cheerful, Kermode on Film, Adam Buxton, Scummy Mummies and Intelligence Squared.

“When it comes to anniversaries, it’s easy to look back in sepia tones at what you’ve done. But actually that sense of just getting started felt much more energising to us. We wanted the creative work that sits around it to have this sort of restlessness and agitation in it,” Guardian marketing director Kate Davies said.

In 2019, The Guardian introduced the “Hope is power” tagline with its first brand campaign in seven years. That message of hope is still relevant to the organisation as it looks ahead to the future, Davies said.

“‘Work in progress’ comes from the same place of feeling that it’s not good enough to just look back, we need to think about what comes next and look for hopeful solutions,” she added.

Uncommon Creative Studio, which created the “Hope is power” campaign, continues to work with The Guardian on a project basis.

With the anniversary campaign The Guardian aims to drive an additional 80,000 acts of support – which could include making a financial contribution or buying a newspaper or digital subscription – across the year.

Along with the brand campaign, The Guardian’s 200th anniversary celebrations will include an editorial takeover on its website, partnerships with cultural institutions such as The Photographers’ Gallery in London and Manchester International Festival, and a digital festival of live events running in May and June.

“Live has been huge for us [during the pandemic],” Davies said, adding that the company sold more than 100,000 tickets to events in 2020, which was four times what it would have been in prior years.

Katharine Viner, editor-in-chief of Guardian News & Media, said: “Since the first edition of the Manchester Guardian was published in 1821, the Guardian’s mission has been to seek out truth and use clarity and imagination to build hope. 200 years is a long time for any organisation to last, but thanks to the support and trust of Guardian readers we now have greater impact and are read around the world like never before.

“We are looking forward to celebrating this moment with Guardian readers and supporters – bringing them special journalism and events which look back at our history, and forward to the future."