Global sports marketing agency Octagon has been involved heavily in event activity in Brazil in the run up to and during this year's Fifa World Cup. Event talked to the team ahead of the start of the international football tournament to understand more about the opportunities for brands at sporting events and the Brazilian market.

The agency has had 150 full-time staff involved in delivering projects in Brazil for local and global sponsors including telecommunications giant Oi!, Budweiser (AB InBev) and Johnson & Johnson. Octagon has also revealed it is the biggest hospitality programme it has conducted, with the agency managing almost 100,000 tickets on behalf of clients, taking four years in total to plan.

What has been your experience of brand activation during the World Cup?

Schunk: "Brands are going further and Brazil is such a huge market. Companies are tackling it with a multi-layered approach and we are working with a number of partner agencies to executive brand activations. There is also a lot going on in the digital realm around the World Cup."

Tell us about your work for Budweiser.

Schunk: "One initiative which Budweiser is doing is Budweiser Heroes, part of its Rise As One global marketing campaign. It aims to reward the work of those who have affected their local communities for the good through football. They will be rewarded with a trip to the World Cup. We will also be activating a series of public viewing initiatives to entice football fans who can’t make it to Brazil to come to parties, positioning them as the second best place to watch the action. 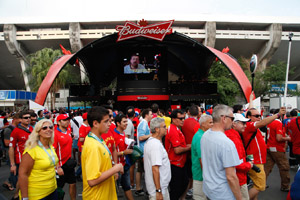 "Mimicking the Budweiser Light Hotel at the Super Bowl, the Budweiser Hotel on Rio’s Copacabana beach will have the same trappings but on a Fifa World Cup level. A line-up of entertaiment, DJs and celebrities will make an appearance at the site. Facebook and Vice will both have on-site studios for visitors to interact with, and the hotel will be Budweiser’s official hospitality base. It’s a unique concept.

"Bud Nation will involve bar takeovers across the globe, including in London, totally rebranding the spaces for the duration of the World Cup. There will be different approaches in each nation, but we have purposely created it as a building block system so that they can be deliberately customised to each market."

What can brands learn from these activations in Brazil?

Leitao: "Hospitality has been the most important to get right in order to deliver a good experience for guests. There have been a record number of hospitality tickets sold for this year’s World Cup, and visitor numbers are up. Also, our perspective is that more people are looking to Brazil to see what brands do. The nature of fans is that they will look at a country and see how much they love sport and football, and Brazil has that."

Schunk: "Sponsors often struggle with what to do when it comes to brand activations, and when we convinced Fifa to do a Budweiser beer garden it made sense to present the brand in this way. It’s more relevant to present a product like this to consumers, and not only that it eases congestion around stadiums and the cities, and gives visitors a place to gather and enjoy themselves.

"The underlying factor is Brazil is a key market for all companies. Investment levels are far more significant than what they were in South Africa and Germany, maybe twice the level than that in South Africa. For certain brands like AB InBev, it’s a huge market. It differs in Brazil in that they can activate in all 12 stadiums and try to hit more territory."

Will the 2014 World Cup affect brands looking to activate at the 2016 Olympics in Rio? 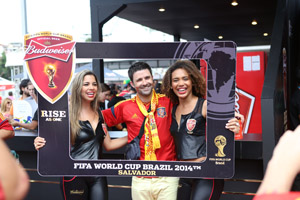 Leitao: "Few only sponsor both. But it will be good for the country and local markets and brands. Brazil will become a more mature market after brand activations at the World Cup and will hopefully be bigger and stronger for the 2016 Olympic Games.

Schunk: "It’s easy to lump together the two events together because they are taking place in the same country. But how brands will activate there will be very different."

What challenges have you had to overcome in Brazil?

Leitao: "I have been involved in five World Cups and everytime it is never 100% ready to go. There will always be delays, but we haven’t experienced any major infrastructure problems. Our perspective from clients is that it will be tough, but they are prepared for that."

Schunk: "It’s no different to what brands have faced in previous years. It’s a big event involving a lot of host cities and logistics. It will inevitably be different to Germany due to the sheer size of the country."

What do brands have to gain from activations at the 2014 Brazil World Cup?

Schunk: "There are a many things brands can gain, one being the external angle – there is a big gain from being a sponsor at the Brazil World Cup. We will not see it in this country in our lifetime and the viewing figures are unparalleled to anything else we have seen. It’s also the perfect opportunity for smaller brands to box above their weight and make a dent in the market, and for larger organisations it will act as an anchor point for their employees on an international scale."

Leitao: "The Brazilian perspective is that the nation enjoys football and it will be a proud moment for the country. The last time it was here was in the 1950s, and it won’t be back here for some time. People are living in the moment and it is a culmination of sport and passion that will come across to consumers."

What should agencies and brands look out for during the remainder of the tournament?

Leitao: "From a brand perspective, it will be interesting to see the role of digital and social media and how it compares to 2010. Brands will be eager to witness and learn from this experience, and it will give them the opportunity to create content they care about. It will be interesting to see what platform consumers gravitate towards, whether it’s Facebook, Vine or Instagram, and how successful they are."

Keep up to date with our latest sport news on our dedicated Sport channel, and on social media via the hashtag #EventSportnews.

On the ground in Brazil with... Imagination