The Fifa World Cup final is almost upon us, after more than four weeks of football-packed action and emotion. Paul Simonet, creative strategy director at agency Imagination, has been on the ground in Brazil and shares with Event which brand stole the show at the much talked about semi-final match between Germany and the host country this week.

Germany wasn't the only big winner this week. It was the biggest night of sporting life in Rio for a very, very long time and the Fifa Fan Fest park on the stunning Copacabana beach was packed to capacity. Literally tens of thousands of people walked through the fan park to fix their eyes on sporting immortality.

The sponsors from Sony to Brahma must have looked down from their majestic hospitality pavilions in satisfied glee. All these people for all this time.

But apart from Germany there was one other winner who came streets ahead of the competition… Coca-Cola stole the show.

Despite the 60-foot apparition of Oscar on Hyundai billboards and the free flowing Brahma beer it was Coca-Cola who captured the night because once again they captured the passion for participation of the fans. 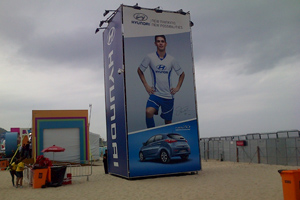 As the Coca-Cola inflatable hands were raised to the skies in front of the warm-up rock bands and during the deafening Brazilian national anthem you would have been forgiven for thinking you were at a Coca-Cola festival not a Fifa semi-final.

Coca-Cola did a fantastic job of opening up Brazilian happiness, at least before the game kicked off anyway.

Keep up to date with our latest sport news on our dedicated Sport channel, and on social media via the hashtag #EventSportnews.

On the ground in Brazil with... Octagon