"We can still see today that people don't believe in global warming but we are facing the effect of it..."

FF Los Angeles is supporting activist Greta Thunberg’s climate-strike movement, Fridays for Future, through a series of travel posters that depict an ominous future for some well-known localities..

In a pro-bono campaign, the agency envisioned a post-climactic catastrophic Venice, Italy; Zermatt, Switzerland; Queensland, Australia; and State of California.

The agency was concerned how some people were not taking climate change seriously, so they approached Fridays for Future and offered these images for a social campaign, ultimately partnering with Fridays For Future US

"We can still see today that people don’t believe in global warming but we are facing the effect of it - the fire in California, the flooding in Venice," said Chelsea Steiger, creative director at FF Los Angeles..

To bring what can seem like an abstract concept home, the posters pose the questions: "You Don’t Believe in Global Warming? How About Local Warming?"

In the Venice poster, a flooded St. Mark’s Square is adrift with floating cafe tables and chairs. Its famous pigeons bob in the water and take to the safety of the air.

Another poster shows that the kaleidoscopic colors of Queensland’s Great Barrier Reef have turned to ashen white.

Steiger and colleagues selected the locations based on news stories, including recent California fires and the melting ice of the Swiss Alps of Zermatt. 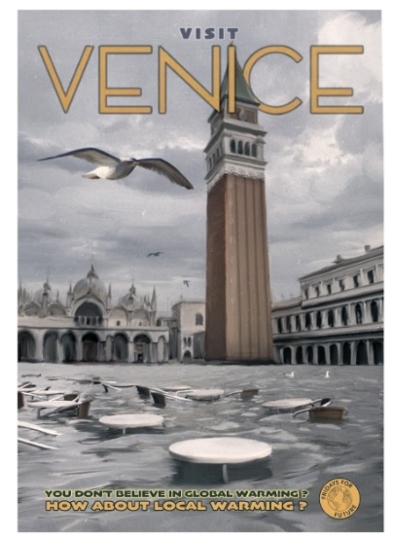 "The prints are illustrating what’s happening around the world in some of the most picturesque and iconic places," said Steiger. "We have more and more fires in California, more and more flooding in Venice."

Thunberg, the 16-year-old who was just named Time’s 2019 Person of the Year, started Fridays for Future as a school strike to draw attention to Swedish and world leaders’ inaction on climate initiatives.

Thunberg herself was not involved in this campaign, but Steiger and her colleagues hope that by featuring well-known localities, people will feel inspired to boldly advocate for climate action wherever they live.

"We received a comment that really illustrates the reaction we are intending: ‘I thought these were beautiful, and then I took a second look… still beautiful + sad,’ " said Steiger. "The hope is for it to create an emotional impact through the crafted prints."

Alicia Keys touts Lyft's initiative to round up fares for charity

New Farmers spots break character - and many other things

A Cross-Cultural Approach to Defeating Indifference