LONDON - Government climate change ads have been banned by the Advertising Standards Authority for overstating the risks to the public.

The ads, created by AMV BBDO for the Department of Energy and Climate Change (DECC), received more than 900 complaints.

The ASA received more 900 complaints along 10 separate lines over the hard hitting ads, more than any other ad campaign in 2009, but most were not upheld. 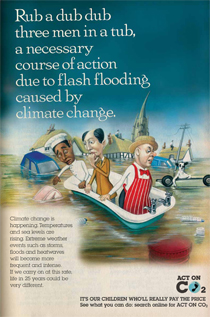 The advertising watchdog did ban a press ad by AMV BBDO for the Department of Energy and Climate Change (DECC) which showed three men in a floating bathtub amid scenes of flooding. Another banned press ad played upon the nursery rhyme 'Jack and Jill' and depicted a drought.

The ASA judged that the imagery and use of text was likely to mislead the public, because they breached CAP Code clauses 3.1 (substantiation), 7.1 (truthfulness) and 49.1 (environmental claims), and should therefore not be shown again in the current form.

The ASA also received complaints from adults who had found the ads upsetting and distressing, but stated that marketers could "use an appeal to fear to encourage prudent behaviour" and said "the fear likely to be aroused should not be disproportionate to the risk".

The ads therefore were not in breach of the CAP Code causes 9,1 and 9.2 (fear and distress).

An accompanying TV ad featuring a young girl being read a bedtime story about "a land where the weather was very, very strange" was not banned by the ASA after it referred to an IPCC report in 2007 that stated, on current trends, there would be "an increased risk of inland flash foods and more coastal flooding and an increased risk of heat waves".