Google is widely known and used for providing answers to factual questions, along with information such as prices and directions – but for large numbers of users, it also plays a role more akin to that of a priest, spiritual leader or social mentor.

This is the aspect of the brand’s search engine that forms the focus of “Hands raised”, Google’s second TV campaign from Uncommon Creative Studio, which features a voiceover from England footballer and social campaigner Marcus Rashford.

“It’s OK not to know; to be curious; to be clueless; to wonder what that is; to wonder what to do,” Rashford says, over scenes of people faced with confusion over difficult issues such as cultural diversity, mental health and appropriate use of language.

“It’s OK to ask – after all, it’s not our questions that define us. It’s what we do with the answers. Because the more we learn, the closer we get,” Rashford continues, while a series of Google search queries are shown on screen: “who can say wagwan”, “whats a ceilidh”, “how to check on someone”, and “how can we understand each other”. The TV ad is supported by out of home executions featuring a wider range of questions.

Alongside these is a YouTube activation, “The Ally Complete Challenge”, which explores the theme of being an ally through asking questions. It will feature a series of celebrity pairs, with Radio 1’s Nick Grimshaw and Clara Amfo appearing in the first instalment.

The new work follows June’s "What are you searching for this summer?", which used a similar format (though without a voiceover) to highlight various ways in which Google search can help people with more emotionally-based questions. But it goes a step further by focusing on the questions that can cause people guilt and shame when they don’t feel able to ask them. 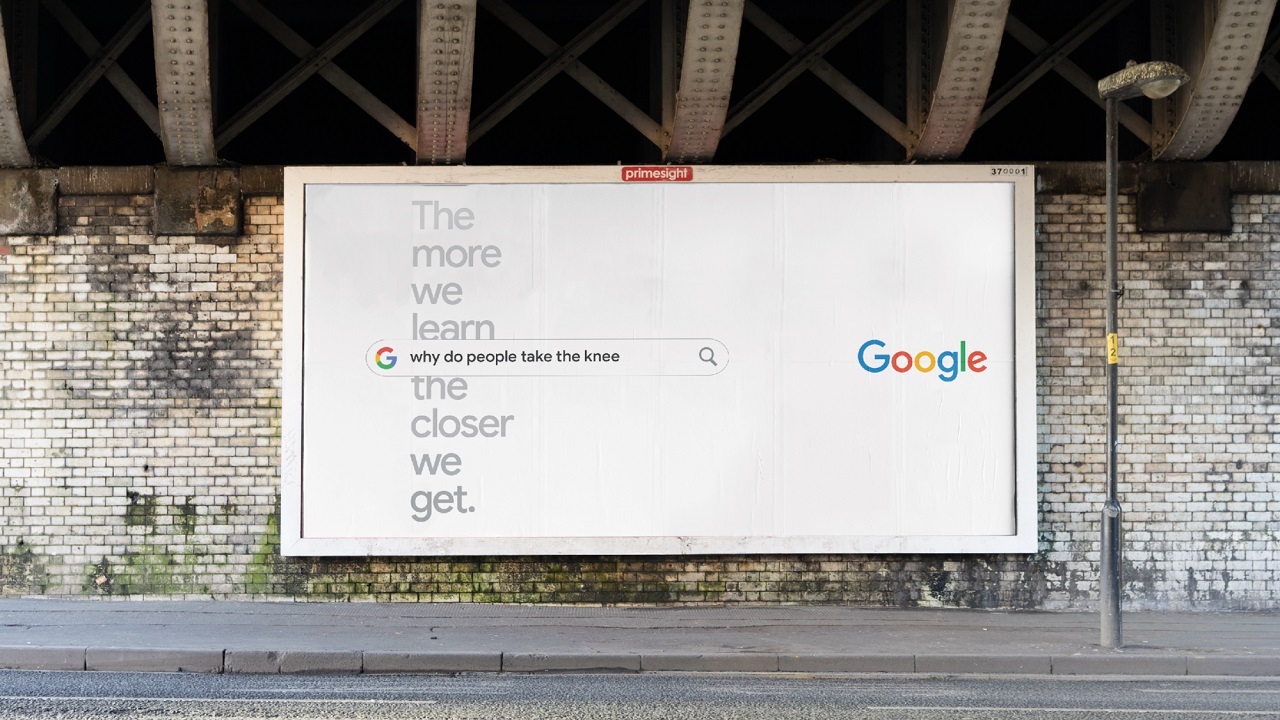 Speaking to Campaign, Google director of brand and reputation marketing Nishma Robb said that the idea had come about around Euro 2020, in particular following the racist abuse levelled at England’s black players – including Rashford – following their defeat in the final.

“What we could see reflected in the search queries… [was a] really interesting observation of people trying to just understand more,” she said. “Not necessarily led by what the media narrative is, or what they might see on social media, but actually trying to clarify, what does taking the knee mean? What does it mean to be an ally?. What does it even mean to be racist? And we see these as kind of breakout search trends.

“It's that thing – it's the question you can't ask anyone else,” she said. “And we can see these confessional search queries appearing… it's critical that people ask these questions. It’s so important that they're leaning in to learn and educate, because it's by our understanding of it that we do come closer together, and we could see that unity actually through better understanding.”

Google's role, Robb said, “is helpfulness, not just in terms of its functionality, but it’s helpfulness in terms of actually helping us to progress: as a society, as a community.”

While questions like these have been common for a long time, the specific ones have changed, Robb said, “because of the progress we’ve made”. For example, a few years ago, it was common for people to ask whether it was OK for a man to marry another man. “We're not necessarily doing that now, because the conversation, particularly around gay rights, has moved on.”

The message the campaign wants to convey, Robb said, is that there is “no shame” in any question someone wants to ask.

“There's no judgement, there's no preaching in this, and there is a compassion, because there's nothing worse than feeling shame about something you don't know… [Given] the kind of language that's actually used around these issues, it's easy to feel shame, and to not know, and feel therefore either excluded from the conversation, or it's easy just to bandwagon stuff without really understanding the meaning of it.”

A common search seen this week, Robb said, was on what to say to a Jewish person around Yom Kippur – the Jewish holy day which this year began yesterday evening (Wednesday 15 September) and ends this evening. Other questions she mentions are things like “what’s the difference between a refugee and an asylum seeker”, and “what is the black curriculum”.

The campaign “chimes without trying with the national questions of this country”, Uncommon founder Nils Leonard added. “The beats that this dances on are the questions we all have around everything today. And that's the important thing, I think – it links to sentiment and to it to the emotion of the nation.

“That's the real joy of telling this work – Google sit at the heart of that. That's a truth, that's not a fallacy made in advertising.” Truths, he added, “have the power to take the sting out of a situation. We're living, aren't we, in what they call the age of outrage, but it's terrifying to not know, and actually just sort of saying to everyone ‘cool man, it's cool, we're all there’, I think is a beautiful sentiment.”

While the problems the campaign tackles have always been there, there’s no doubt that changes to social discourse have accelerated as the quantity of information we receive on a daily basis has gone through the roof, along with our level of engagement with people and perspectives outside our immediate experience.

“Social media and our consumption of media generally has accelerated what we know and understand or hear about,” Robb agreed. “The modern lexicon seems to move at a pace that it's almost impossible to know, what does that term mean, and it gets bounded about us in such a way that you can feel quite embarrassed if you don't really understand what it is.”

Google has had a relationship with Rashford since last year, when Robb contacted his team and supported his campaign to provide free meals to kids that need them during the school holidays – for which he was awarded an MBE last October.

Rashford’s involvement was not originally planned for the campaign – but it was also not a case of finding the right voiceover. “It was him or no VO,” Robb explained.

When you dig into what motivated Rashford’s campaign, you find that “he wants to remove the shame that exists around those that ask for help,” she said – which is why he was the perfect fit for this voiceover. “It was something that felt very natural and real to his own personal mission around awareness, support, community and love, and that's why for me, Marcus is someone who's a role model and a champion, and an absolute beacon of someone who encourages that sense of tolerance and asking questions and progress.”

“Everything Nishma is talking to is something [Rashford's] deeply passionate about,” Leonard added. “He's evidenced that in his behaviours in the world. It's a genuine collaboration, not some sort of paid-for acting moment. And that's honestly the key to why it works – that’s why it doesn't feel like an advert preaching to you, it feels like something different.”