YouTube is offering brands a new driver for ecommerce by introducing shopping ads to search results and home feed of the video platform for the first time.

Nicky Rettke, director, product management, at YouTube, said the move was in response to almost half of shoppers being open to buying from new retailers in the run-up to Christmas, while an increasing number are using online videos to find ideas.

"Video has become a favourite research tool for holiday shoppers," Rettke said. "Nearly two-thirds of shoppers say online video has given them ideas and inspiration for their purchase. And more than 90% of these folks say that they’ve discovered new products and brands via YouTube."

YouTube has also added more interactivity to video ads, allowing advertisers to provide information such as store location, interest forms and additional calls to action. It also plans to add the option for sitelink extensions for the TrueView ad format, meaning advertisers can direct users to pages such as holiday catalogues and store opening hours. 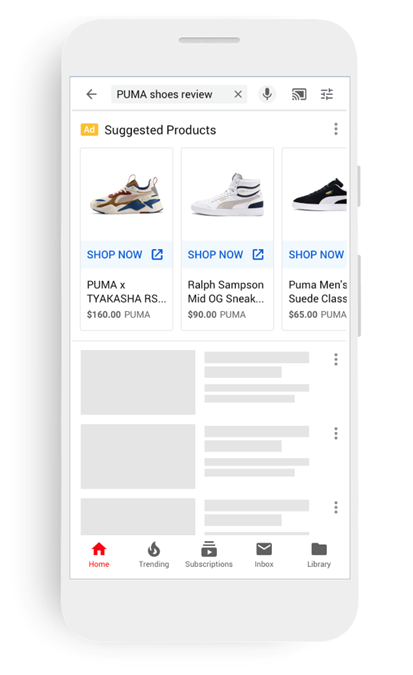 The platform said that users with an interest in running, for example, could see ads for running apparel from Puma, which is using the tool. "Consumers are continuing to watch more content on the YouTube platform and we want to be where they are to reach and engage them," Rick Almeida, vice-president of ecommerce at Puma, said.

The move comes after eMarketer published research last month predicting that Amazon would be the only major player to see US search advertising revenue grow in the next few years. The research group said the majority of product searches in the US now start on Amazon.

Amazon has been "starting to grow its share of ad dollars in categories that are not very reliant on Amazon", Mudit Jaju, global head of ecommerce at Wavemaker, said.

But he added that brands that treat Amazon as a conversion channel were not usually those for which direct-to-consumer was a major channel – meaning YouTube’s new offering might not be directly competing with Amazon for the same advertisers.

Instead, Google was targeting the advertisers Facebook and Instagram have been successful in attracting, Jaju said. These include large numbers of small businesses that have not previously advertised – especially in categories such as fashion, beauty, entertainment and sport.

YouTube’s new format offered a compelling new option to these advertisers, he argued: "It sounds crazy to suggest that investing in Google is a way to diversify your adspend, but in ecommerce it’s really not."

For Google, expanding ad products linked to ecommerce "hedges them slightly against a loss of ad revenue" from areas such as traditional search, which Jaju suggested faces challenges from changing technology and behaviour – for example, internet users are now less likely to use the Google homepage to get the weather.

Jaju insisted that formats such as YouTube shopping ads "100%" still offered the potential for creativity in advertising. "What creative people like to do is have more tools to play with. More ways to combine things, to move them around, gets us excited."