The secret to Google's mobile advertising success lies in the diversification of search and its ability to stay ahead of the curve, Enders Analysis reports.

Google's core business in search is bigger than ever and has never innovated faster, authors Matti Littunen and Alice Enders reported.

While some have questioned Google's ability to survive in a mobile-first world, Enders Analysis finds that mobile has "supercharged" Google's core business.

On a net revenue basis, mobile search alone has represented 78% of Google’s US ad growth in the past five years and the share is likely to be even higher globally. 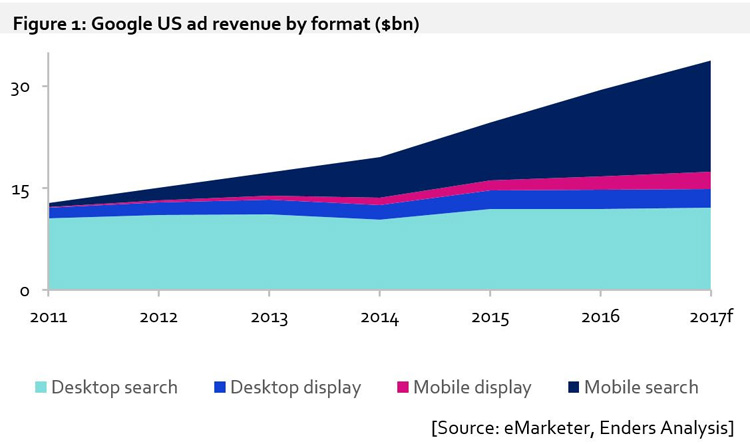 Central to Google's success has been its ability to adapt and respond to the different types of answers people seek when they search. The company has evolved its product into a modular system of information units designed to support every type of connected device.

"These are dynamically combined and arranged to fit the screen and user context, meaning that not only is mobile search an entirely different experience from that on desktop, but even within mobile the search results for different types of queries will result in vastly different layouts," the report said.

Google has also successfully used its different products as varying user touchpoints for the same engine. Maps, Gmail and YouTube all provide results for search, collect data which can be used to improve it, and serve AdWords ads.

The platform's suggestions engine now cross-promotes these functions, the report noted. For example, Google search knows when to surface relevant YouTube links, while Gmail and Calender turn addresses into map directions and flight dates to reminders. 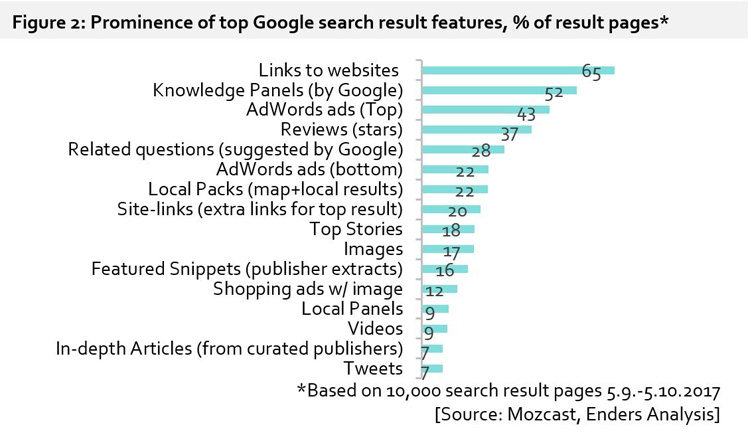 "The underlying infrastructure benefits Google regardless of device or context," the authors said.

Google has also managed to "dramatically" increase the prominence of its ad units relative to other results types without alienating its users.

The search engine is able to display units based on user location, keyword and past searches.

Key to its ability to adapt so swiftly has been its investments in machine learning.

"Many companies are now saying that artificial intelligence is at the very heart of what they do, but Google is one of the very few which can justify that claim," the report said. "The very process of deciding what to present to users, to which ones, and when, benefits from machine learning models."

From RankBrain, in use since 2015, to analysing individual frames on each video uploaded to YouTube, Google has been training its AIs for a future where computer vision and cameras become more important as prompts for online content and services (as part of augmented reality). The launch of Google Lens has turned smartphone cameras into eyes for the search engine.

"In sum, where machine learning is tangential to the current consumer proposition of even the likes of Apple and Amazon, it is already making a material difference to each of Google’s main services and benefiting from the company’s unique assets," the report said.

Even in the Apple stronghold, the iOS, Google has been making headway. In less than three years, Google iOS apps have gone from reaching slightly over half of US iPhone users every month, to close to 90% today.

The report disclosed that Google pays annual license fees to Apple to the tune of "low single-digit billions of dollars" but this investment has a "return on investment that mobile apps can usually only dream of", the report said. "In the US where the iPhone penetration is high we estimate that around three quarters of Google’s mobile search revenue comes from iOS."

However, central to Google's success here has been its technological innovation, not just its money, they continued: "Given Apple’s focus on user experience, it is reasonable to assume Google’s capabilities relative to competitor Bing were part of the calculus when Apple recently decided to make Google the default search engine for personal assistant Siri and internal search interface on Apple devices, Spotlight."

Machine learning is also working for advertisers – forecasting the effect of a changed daily budget or a maximum bid on campaign results.

At a quick glance, it's easy to conclude that by offering these services, Google would reduce its cost-per-click rates. However, the long-term effect is far more complex, the report cautioned.

"If the automation is able to provide a better return on search investment, clients have an incentive to spend more – a better long-term outcome than allowing clients to waste money in an overwhelmingly complex system. This is a simple but valuable lesson for everyone offering services to online advertisers – one too often ignored," the report said.

Amazon is definitely a contender for Google when it comes to retail product search. To that end, Amazon has built a search advertising business to directly compete with Google, Enders Analysis noted.

However, while Amazon has excelled at product search, they are far from owning the search funnel. When tested, Amazon struggled with early customer journey queries such as "dead pixels on TV" and "LG TV warranty".

"Google provided relevant results (although mostly sponsored) for each one. To quantify this effect, a Bing executive recently estimated that the top search engines answered 70% of retail search queries in the US, compared to 30% for Amazon," the report said.

And even in product search, Amazon cannot rest on its laurels. Google has been aggressively expanding its Product Listing Ads (image-based paid search results).

"This has led to rapid adoption: among the clients of Merkle, a digital marketing agency, 53% of US and 51% of UK retailer search spend is now on PLAs. As a sign of how essential the ad unit has become in e-commerce, Amazon itself has become a major PLA advertiser, after years without spending anything on the format," the report said. 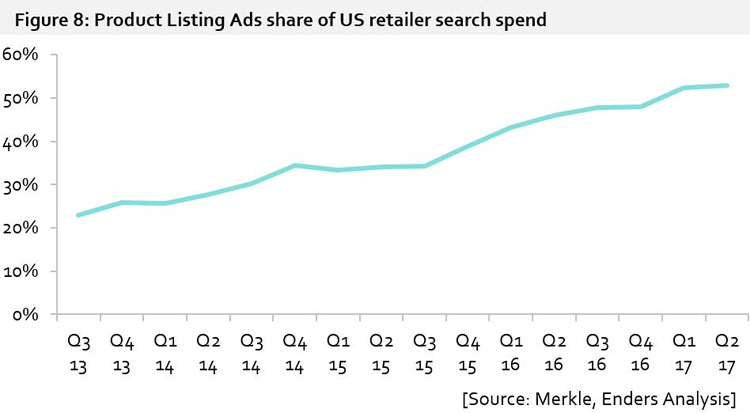 Google's risks, therefore, tend to lie outside that of technological development.

"It can now be argued that political and regulatory risk are the largest issues facing the company, not least because they limit Google’s strategic options," the report said pointing to the anti-competition charge Google faced in Brussels, privacy concerns and growing negative press from media companies disadvantaged by Google.

Finally, these regulations could halt Google from making strategic acquisition in its weak spot - the social layer, the report concluded.

" A vertical merger with a social network or a popular messaging app would make strategic sense (hence Google’s reported interest to acquire Snap... But this kind of merger, or even a close partnership around data, would very likely come under intense scrutiny by the European Commission," the authors said.

Google looks to banking with plans for current accounts

Direct website traffic is the most influential ranking factor: SEMrush

The next wave of 'smart' tech is irresistible

The battle for Alpha eyeballs

Google puts Uber on alert by investing in arch-rival Lyft

Facebook and Google 'collaborated on anti-refugee campaign' during US election

Why voice technology is a marketer's new best friend

How DeepMind has redefined Go and human potential