The launch of the limited edition advent calendar - which has a token for a different Greggs menu item behind each door - received widespread publicity at the start of the week, with scores of publications reporting on it.

Controversy started mid-week when Greggs' hometown outlet the Newcastle Chronicle quoted a vicar’s criticism of the brand’s depiction of the nativity scene with baby Jesus as a sausage roll.

Other campaigners waded in, criticising the move as insensitive. 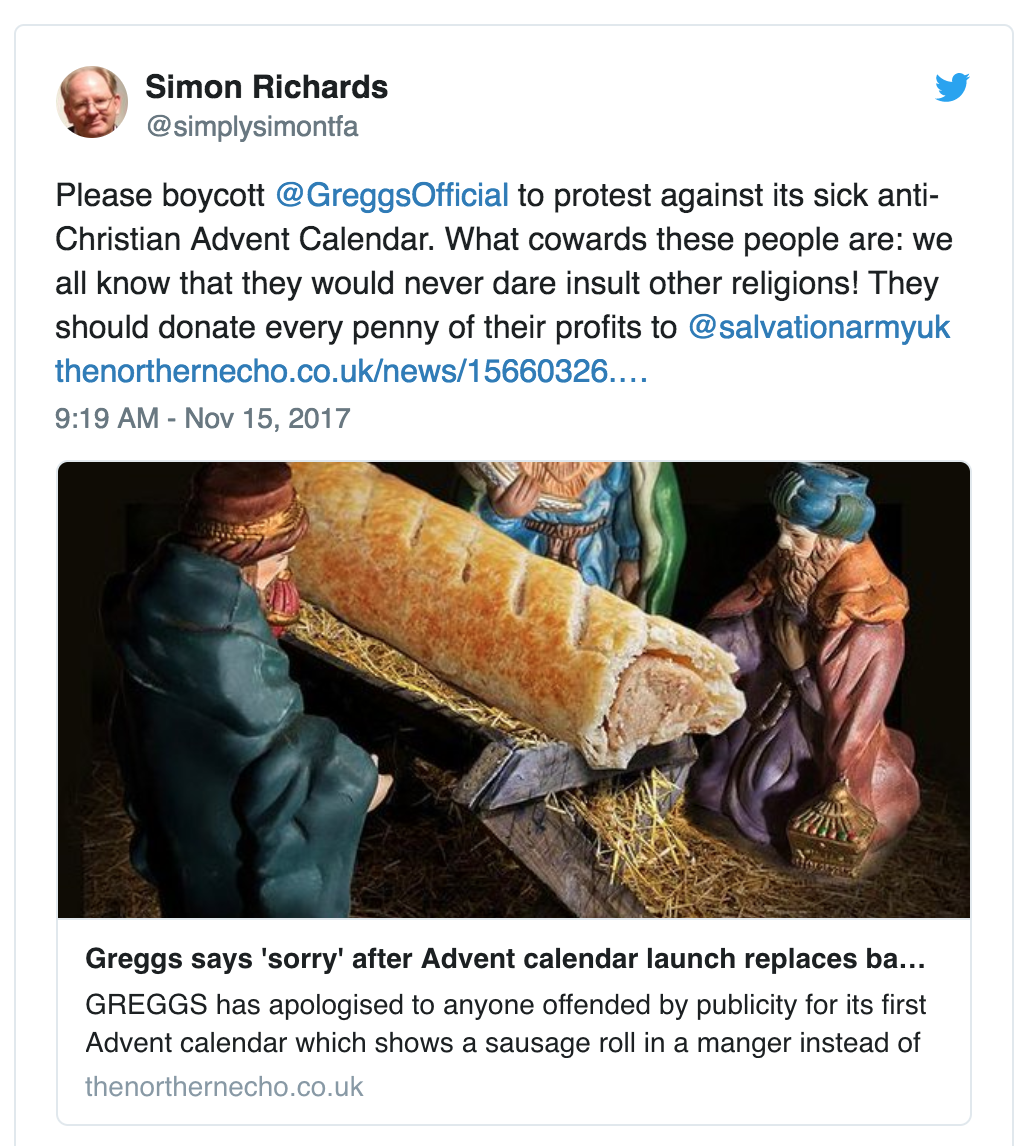 Greggs issued a swift apology, saying: "We're really sorry to have caused any offence, this was never our intention."

The criticism fuelled a wider debate around what is and is not acceptable around the use of religious symbolism in marketing.

Some Church leaders were quite relaxed about the issue. Daniel Webster of The Evangelical Alliance told the BBC they were "not too outraged", adding: "Every year, some company creates a Christmas controversy for commercial gain."

Some defended Greggs' right to use the image, while separate polls on TV show Loose Women and radio station LBC put support for the brand’s right to do what it did at 82 and 75 per cent respectively.

Many people saw the funny side: 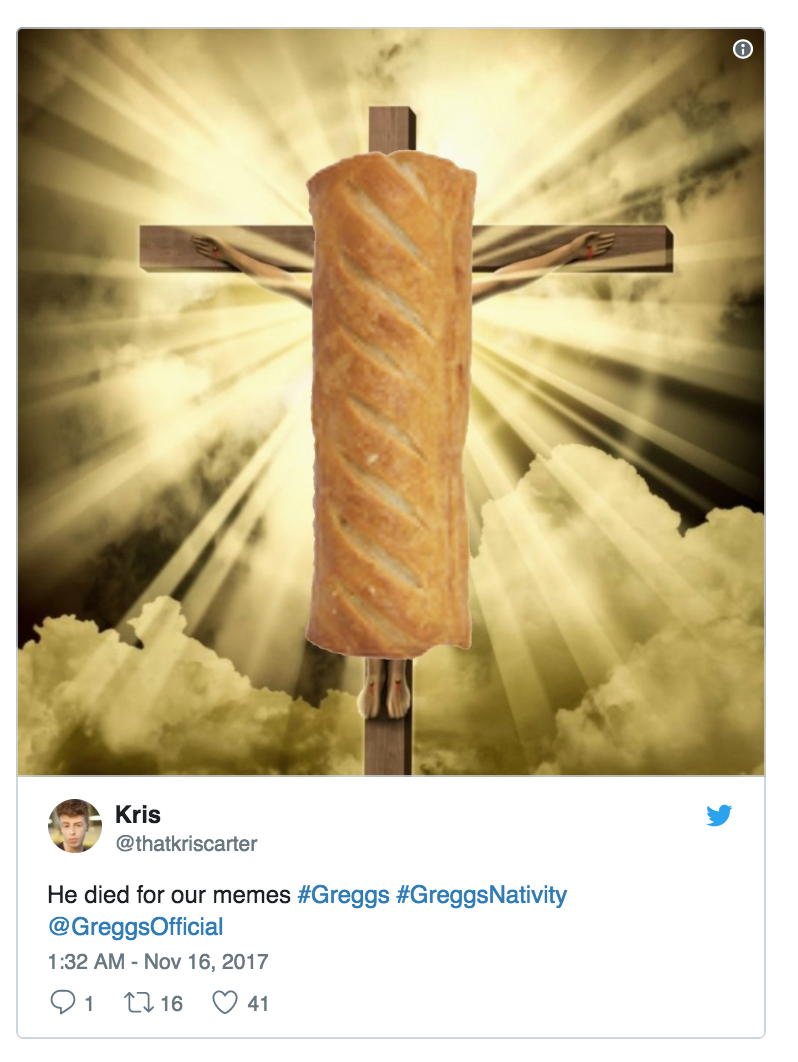 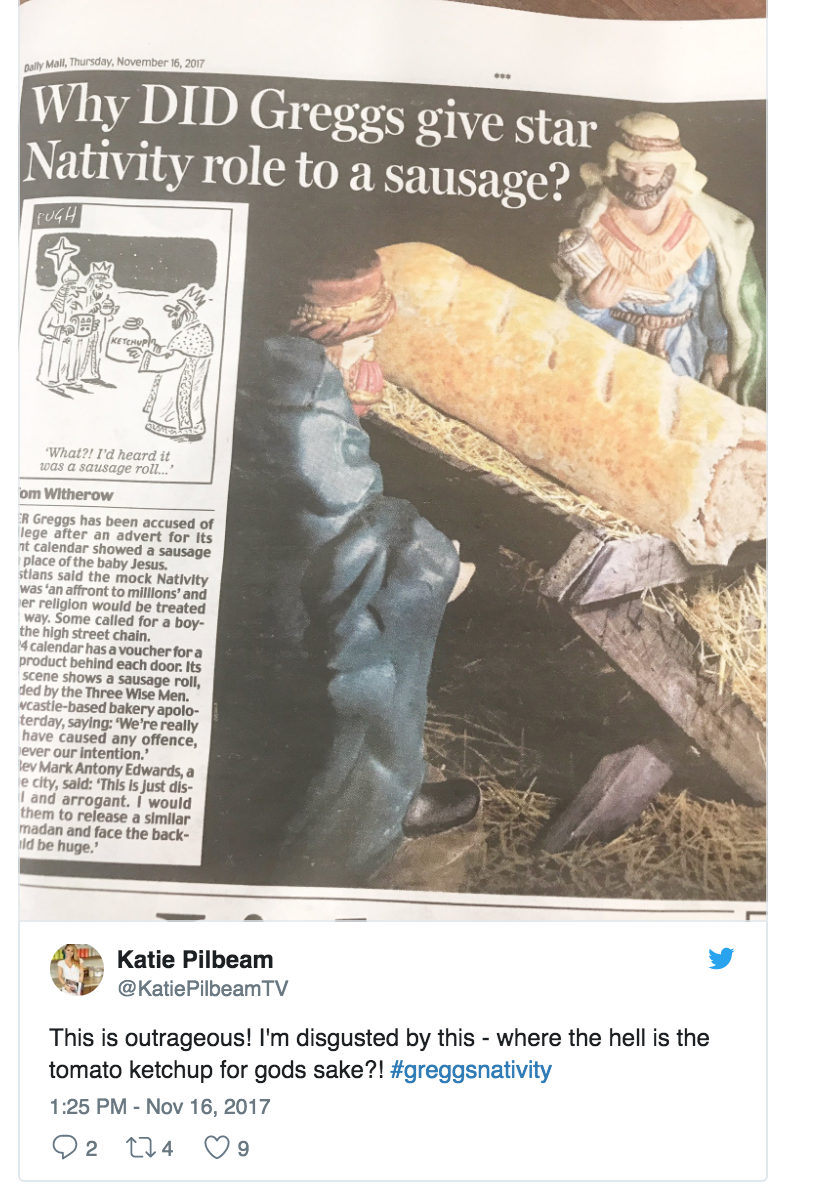 Others assumed it was a calculated marketing ploy:

This morning (Friday) there were reports that Greggs had sold out of sausage rolls following the week of publicity, which saw #greggsnativity trend on Twitter for two days. 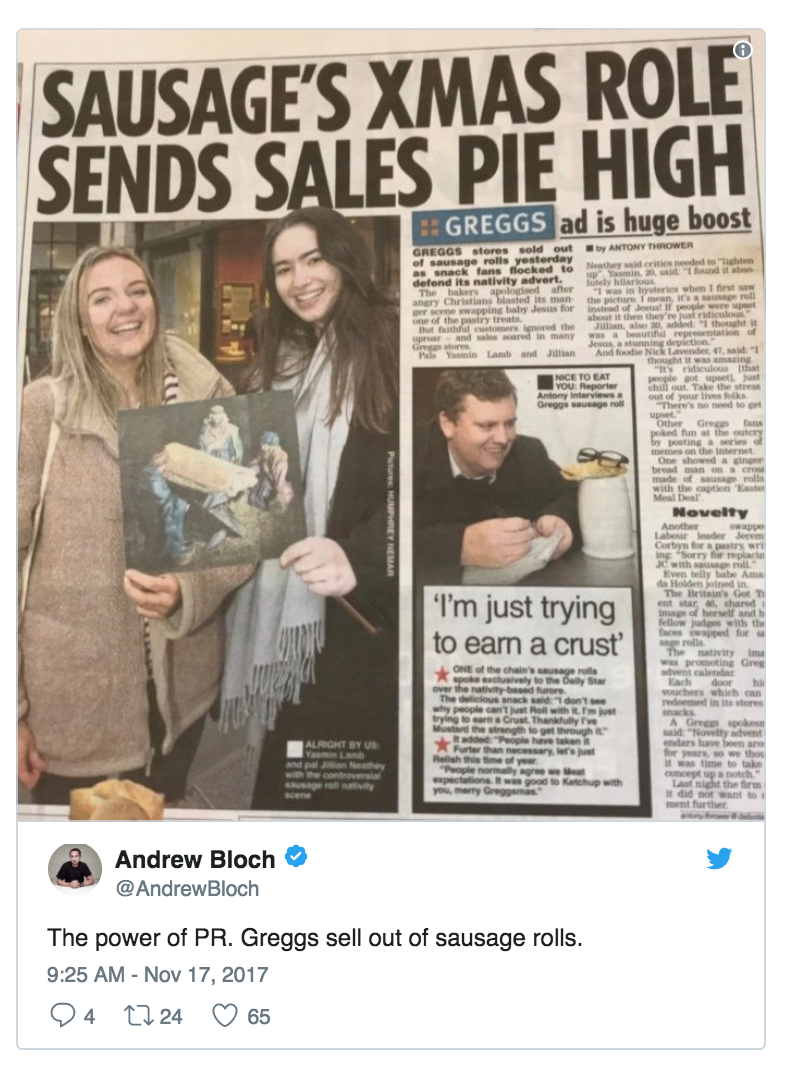 Taylor Herring, the agency behind the calendar, was unavailable to comment on the campaign.

PRWeek spoke to comms experts to get their view on the episode. Was the brand right to undertake the stunt, and right to apologise as it did? Will it be good or bad for Greggs in the long term? See their views below:

"The apology from Greggs is as half-baked and as lazy as the creative. This was set up to cause maximum offence.

"But even church leaders have realised it's an artificial, processed furore of the brand's making and they've refused to play into the company's hands.

"I'm disappointed that as an industry we have to resort to these types of tactics. If you run a campaign then make it good. Be brave, stick with it - don't just (sausage) roll over when someone has a moan.

"Greggs is known for being light-hearted and clever, but for me this is neither.

"There's no doubt they had to apologise but has it caused any long-term brand damage? Not at all. It's pretty much disposable content - social chip paper - and we've already forgotten about it. Certainly the queues outside Greggs near our office are as long as ever."

"The fact Greggs responded quickly did at least help. But let's take a step back from that. Those of us who have worked on Christmas campaigns have long been aware of the sensitivities around this time when it comes to secular vs religious creative.

"It's an area any brand engaging with a Christmas theme must be prepared for. Greggs apologised quickly but they created the risk themselves. For those who feel it may have delivered some useful results for the brand it's worth remembering comms agencies create amazing content every day, which can be proven to have a real commercial impact and stand out, without the need for retractions or apologies. There's no need to assume creative should ever drift into territory where it can cause offence.

"Whilst creative is critical, it should be all about what message will best resonate with your target audience.

"Humour or education can then be built in. And brands can still be ambitious without blindly chasing a creative idea by simply testing a concept so any pitfalls are preempted."

Apology was a surprise

"It seems clear that this was designed to provoke, and to that end it was certainly successful. At any rate, it certainly got everyone in the comms world talking (and I am sure some of us craving a sausage roll in place of our Pret salads!).

"I find it hard to believe, despite their apology, that Greggs (and their agency) didn’t see this negative public reaction coming, and would go as far as to speculate that this was surely part of the strategy? As a brand, Greggs seems keen to tap into the world of ‘banter marketing’, following in the footsteps of the likes of Paddy Power, etc. This picture therefore seems to fit perfectly with this ongoing activity.

"For this reason, the apology does surprise me a little. As we have seen many times before, sometimes provoking a reaction can be a really powerful way to galvanise a core audience behind a brand, but the public apology could risk undermining this and undoing the work done…

"I await with interest to see what they do next, as this will tell us a lot more about whether this was an intentional provocation as part of a sustained strategy, or a mistake, as they claim in their statement."

A perfect storm of controversy

"Intentionally or not, Greggs has lucked into a ‘perfect storm in a polystyrene cup’ of controversy with its advent calendar ad.

"Publicly they may be eating humble pie, but with only 1.5 per cent of the country regularly attending church, what sales they lose will be dwarfed by the huge sales gains that follow widespread national coverage. There are more tasteful ways to generate fame, but then, this is Greggs after all.

"And, considering that it’s only selling 500 of these calendars, Greggs couldn’t have planned this better if they’d tried. He's not the Messiah, he's a very naughty roll…"