The majority of Tinder users are now between the ages of 18 and 24.

Those Gen Z kids are growing up - so fast, in fact, they are now the largest age demographic on Tinder.

Tinder released an analysis of app usage Thursday, "The Year in Swipe: What 2019 Taught Us about How We Connect."

Tinder members, led by Gen Z users, age 18-24, are seeking authenticity, the study suggested. "Real" and "lit" popped up most often in user bios, indicating young users’ most valued characteristics. Other bio terms that Tinder users favored were people embodying a sense of "mission/cause," someone ready to spill the "tea" and those who could "stan" the same things they did. 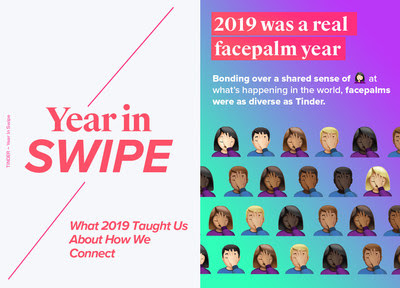 Climate change, the environment, gun control and social justice in general popped up as the causes most often cited in bios.

Politically, the Green New Deal and Elizabeth Warren both surfaced as topics of note.

Emojis make up another Tinder metric covered in the study. If they truly reflect how we feel, then Gen Z is cringing away at world affairs and their own foibles. The "Facepalm" emoji saw a 41 percent increase in usage this year, among the 300 million plus times emojis were used in bios.

Across all age groups, June was the busiest month on Tinder, coinciding with LGBTQ+ Pride Month. Through 2019, 30 percent more Tinder users than in 2018 used Tinder’s More Genders feature.

The busiest cities in 2019, where the greatest surge in Tinder usage was noted, are Atlanta, Orlando, San Diego and Dallas.

The West Hollywood, Calif. company based its findings on usage between January and November of 2019. In a September 2019 report, Statista puts Tinder at 7.86 million US users, making it the most popular dating app in the United States ahead of Bumble at 5.03 million.