A study by Unidays shows that brand campaigns and incentives are not the reason the digital generation is getting vaccinated.

According to a survey of nearly 8,000 global students in July, brand ads had little influence on the decision by 69% of respondents to get fully vaccinated and 9% to get partially vaccinated, with 88% saying the decision was not influenced by an ad.

Friends and family are more influential to Gen Zers than ads, despite the fact that 44% of respondents have seen advertisements about the vaccine, per the survey.

In the past year, brands, including Krispy Kreme, Unilever, Budweiser and McDonald’s have offered incentives such as free doughnuts, Klondike shakes and a free beer round to encourage vaccinations. 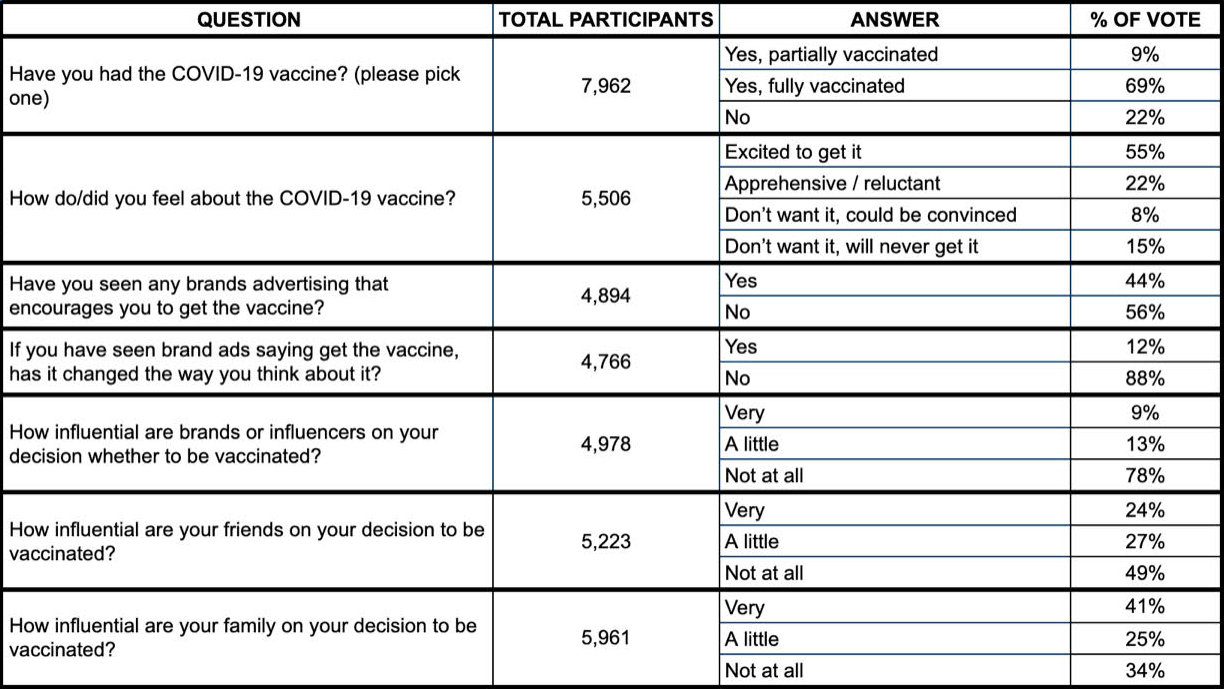 The insight suggests that while brands are aligned with Gen Z’s values regarding the vaccine, they need to be careful not to sound too preachy, said Alex Gallagher, chief strategy officer at Unidays.

“Young people are not the reckless irresponsible super spreaders that are often being portrayed and the data shows no students want a return to online lockdown learning, or seeing campuses shut,” he said in an email. “They are taking the vaccination seriously, and Gen Zers want brands to embody their own values, so they will look favorably at those that  are vocal about vaccines.”

In the U.S., the White House is actively recruiting an “army” of influencers to combat vaccine misinformation, including Twitch streamers, YouTubers and TikTokers. Recently, President Biden met with Gen Z pop artist Olivia Rodrigo to encourage vaccinations among her cohort.

State and local governments have also launched their own vaccine campaigns featuring local influencers and incentives such as $100 payments in New York.

While such campaigns may move the needle, brands need to be careful not to patronize Gen Z by “assuming they’ll only heed medical advice from a TikToker or their favorite soda brand.”

“With Gen Z, it’s not always who is delivering the message, but how it’s being delivered,” he said. “Everyone knows the 4 P’s of marketing, but with Gen Z we are seeing that a fifth, participation, gets the most cut through. Young people don’t want to be told; they want to be heard and they want to be involved.”