New survey reveals a gap between what brands spend and what viewers remember seeing.

With $1.28 billion spent on paid advertising in 2015, Geico doesn’t come close to cracking the list of the world’s 10 most prolific advertisers. But the insurance company with the famously quirky ads nonetheless grabbed the No. 1 spot in YouGov BrandIndex’s first-ever Ad Awareness Rankings, beating out bigger spenders like Verizon Wireless (No. 2) and AT&T (No. 4).

The new rankings are based on an always-on digital survey that poses a single multiple-choice question: Have you seen an ad from this brand within the past two weeks? Geico’s media spend indicates it should rarely have been the most popular answer. But the results suggest there is a gap between what viewers see and what they remember.

Though ad spend certainly played a role in helping brands make the list, "the quality of the advertising" and whether those ads are "reaching the types of people you want to reach" were equally significant, said YouGov BrandIndex CEO Ted Marzilli.  The amount of clutter within a brand’s category also played a role, he said. 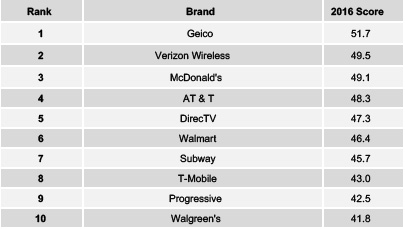 Telecoms and cable companies had a particularly strong showing on the list. Verizon, which spent $1.46 billion in measured media in 2015, according to Kantar Media, was the second most recalled advertiser. AT&T came in at No. 4, DirecTV was No. 5 and T-Mobile No. 8.

Marzilli was impressed that these companies showed up at all given how crowded the space is. "The fact that four telecom, cable and satellite brands show up in the top 10 with all of that advertising is kind of amazing to me," he said. "That the individual brands stick out instead of it being, ‘Gosh, those telephone guys are always hitting me up.’"

Overall, the list was dominated by just a handful of industries. Two restaurants made the list: McDonald's, which spent $825 million in 2015, took the third spot, and Subway came in at No. 7. Progressive, which ranked ninth, joins Geico as the second insurance company. And Marzilli believes that one could loop Wal-Mart (No. 6) and Walgreens (No. 10) together since both retailers are advertising groceries and pharmaceuticals.

"It’s interesting that of the top 10, eight brands come from just three industry categories," he said.

The Ad Awareness survey is rooted in YouGovs’ annual "Top 10 Most Buzzed Brands" list, which seeks to gauge overall consumer perception of a brand. The single question behind that survey is: "If you've heard anything about the brand in the last two weeks, through advertising, news or word-of-mouth, was it positive or negative?"

None of the brands on the Ad Awareness list made the 2016 Buzzed Brands list. Marzilli said this is why his company created a separate "Ad Awareness" ranking in the first place. "What they can’t control is what people say about the brand or what happens to the brand in the press," he said. But marketers can control their advertisements, so this list informs clients how much of their buzz is tied to an advertising buy.

Turns out, it’s not much. Despite being No. 1 on the Awareness list, Geico achieved a buzz score of just 15.9 (meaning 15.9 percent more people said they view Geico favorably). That means the top three brands on the Buzzed list—Amazon, Netflix and YouTube—are crushing the popularity contest without shelling out comparable ad dollars.

Still, are Geico, Verizon and the other top rankers getting their money’s worth? Marzilli thinks so. More than half of the US adult population recalls seeing a Geico ad—that’s 140 million people. And each of these marketers lead their industry categories on the buzz list.

The research firm also measured ad awareness improvers. Of the top 13 (three brands tie for the 10th spot), only one ranks in the top 10 most-buzzed brands: Amazon. Between 2015 and 2016, 3.1 percent more Americans said they saw one of the online retailer’s ads, and yet, word-of-mouth and the media lifted the brand to the no. 1 most buzzed spot, suggesting that marketing only takes a brand so far.

Ten brand fails of 2015 that haven't hurt the brand (yet)