Nearly half of programmatic buyers in UK have brought function in-house completely.

The tightening of data laws in Europe failed to stop the surge in programmatic adspend last year, new research has revealed.

The US-based Interactive Advertising Bureau commissioned the research, which was sponsored by Accenture Interactive.

The research suggests that the introuction of the European Union General Data Protection Regulation may have encouraged in-housing by brands, rather than deterring them.

A series of reports by the IAB show that the vast majority (86%) of brands in the UK, Germany, France, Spain and Italy have either fully or partially brought programmatic buying in-house.

The study also shows that programmatic adspend increased last year in the eight months since GDPR came into force in Europe on 25 May 2018.

GDPR has imposed new compliance restraints on advertisers by requiring them to give consumers more control over the collection and use of their personal data. 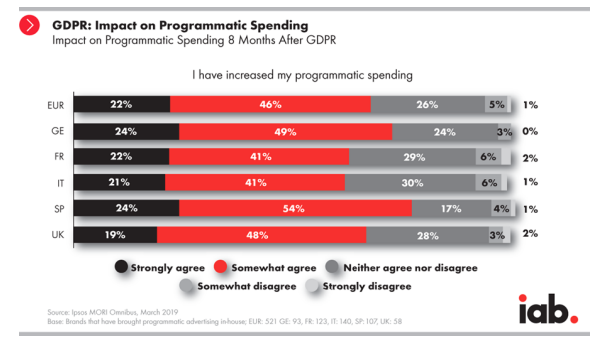 The introduction of new restrictions heightened the possibility that brands’ targeting ability in programmatic ad buying would be blunted by consumers withholding consent for tracking.

While the impact of GDPR appears to have been softened by marketplace demand for programmatic ad buying, three-quarters of UK brands (76%) reported some level of data quality improvement.

GDPR also appears to have had a moderate impact on data loss, the research shows, with only 7% of UK brands feeling strongly that the volume of targeting data had declined following the law's introduction.

Nearly half of programmatic buyers in the UK (48%) have brought the function in-house completely, while 40% have partly done so, the research adds.

This is the full breakdown by country: 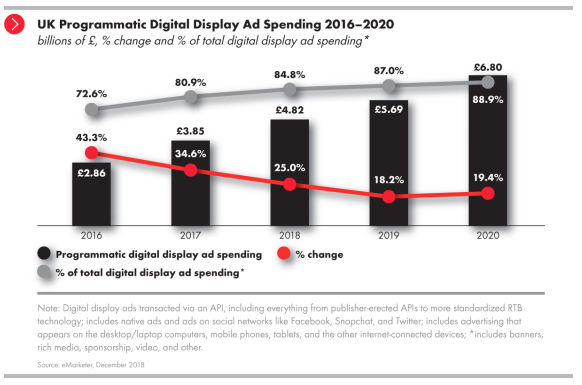 When asked for the top three reasons why advertisers would bring programmatic buying in-house, the most popular response was "cost efficiciency"  (42%), followed by "better audience targeting" (39%) and "campaign effectiveness" (39%).

Scott Moorhead, founder of Aperto One, which has advised Sky and Barclays on recent media buying reviews, said: "The key thing is the definition of in-house and it is here that the headlines that may come out of the report may be misleading. Does having slightly more programmatic people in the team really count as in-housing?

"If you’re saying half of UK advertisers are running programmatic end-to-end in-house, absolutely not – it’s not even close. Some brands in sectors such as travel and gambling do a lot in-house and others are certainly thinking about it, but most understand that outsourcing of tasks is vital.

"Finally, cost efficiency and value in the truest form is not a likely output of in-housing. If there is an ambition to save money, in-housing programmatic is not necessarily a way to do it."

"Creativity is about micro-moments"

Data and automation will transform, not kill, the craft of media planning