FourFourTwo's July issue is guest edited by football superstar Lionel Messi, whose first act in the role was to change the magazine's name to FourThreeThree. 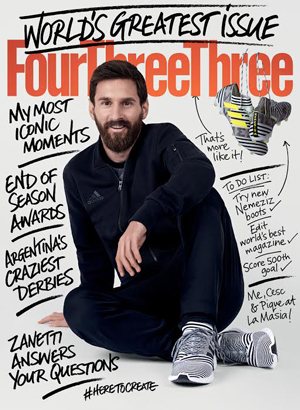 The Argentine footballer is only the second player to guest edit the Haymarket-owned title in its 24-year history. Brazilian legend Ronaldo took over the reins in 2014.

The name change was inspired by his club team Barcelona’s "4-3-3" formation. Messi said the "4-4-2" model that inspires the magazine’s brand name is "outdated".

The Messi collaboration and July issue are being promoted by the magazine on social media, including video content of the footballer tackling his role as guest editor. FourFourTwo’s social accounts now service more than four million people globally.

David Hall, FourFourTwo’s global editor-in-chief, said: "This collaboration is a testament to the ongoing strength of the FourFourTwo brand.

"Securing arguably the game’s greatest ever player as our guest editor is confirmation of the respect FourFourTwo commands in the world of football."

FourFourTwo worked with Messi's sponsor Adidas to do something original and agile with the magazine, as well as promoting the launch of the brand's new Nemeziz boot. In the process it aimed to produce something that showcased creativity in print and a month's worth of digital content.

Haymarket profit climbs 26% amid US expansion

FourFourTwo launches in US

Haymarket's profits jump 8.7 per cent after online and US expansion