Brand experience agency Flourish has been tasked by rugby clothing brand Canterbury to develop an experience for rugby fans at Twickenham Stadium.

The Republic of Rugby pop-up was developed to promote the recent launch of Canterbury’s spring/summer 2014 sport casual campaign, and engage with all rugby fans no matter who they supported.

It took place in Twickenham’s west fan village during the RBS 6 Nations Championship rugby union tournament during February and March, and will return to the sporting venue for the Marriott London Sevens in May.

Flourish designed the experience as a rugby clubhouse, and visitors could take part in table rugby, select rugby anthems from a jukebox and browse a ‘legacy wall’ full of facts and memorabilia from the history of rugby and Canterbury. A Republic of Rugby honours board also allowed individuals to write the names of their rugby clubs.

Participants were also given the chance to win £500 of Canterbury clothing by declaring what rugby is to them on branded whiteboards and posing for a photo. Each photo was then instantly emailed to those involved using interactive touch screen tablets, automatically entering them into the prize draw. 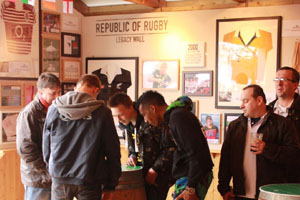 To increase awareness and engagement on social media, Canterbury encouraged fans to share their Republic of Rugby experience using the hashtag #RepublicOfRugby.

Chris Stephenson, Canterbury chief executive, said: "We wanted to create an experience where rugby fans, no matter what nation they support, feel included and part of something special. The Republic of Rugby does just that. It was great to see fans engaging with the brand and enjoying themselves during the RBS 6 Nations."

Harry Osborne, Flourish’s creative lead on the project, added: "This campaign focuses on Canterbury's new casuals collection, not the team kits, and as such it was important to focus the activity very much on a rugby message rather than an England message.

"We wanted to get to the heart of the fans' love of rugby with a number of shareable interactions, but also by creating an environment that really is the ultimate clubhouse in every detail; somewhere for the fans to truly call home."

In pictures: StaffWarehouse devises pop-up for Fruit of the Loom