South of the river. It's not an area historically associated with the glamorous world of advertising. But in the next few months we welcome a couple of new neighbours to the area - Omnicom and Ogilvy.

At Iris we've called the bottom bank of the Thames home for the past 16 years. And what the area might lack in glamour, it makes up for in grit. And when it comes to creativity, a little bit of grit goes a long way.

In its heyday Soho created the ultimate conditions for creative collision - a compact melting pot of creative professions where advertisers would rub shoulders with filmmakers and fashion designers on their lunch hour.

And similarly, as contemporary creative businesses swarm to the south side of the Thames it has the potential to mimic Soho's success. With the impending completion of the artistic community-orientated Tate Modern II the area could become the de facto home of collaborative creativity in London.

I spoke to Paul Bainsfair, the director-general at the IPA, on this recently. And as someone who knows Soho adland better than most, now and in its prime, he had an interesting take on the south of the river scene.

He said: "I have spent most of my advertising life in and around Soho and it always seemed perfect for agency life - irreverent, bohemian, grubby and full of great bars and restaurants.

"It’s also reassuring bumping into other agency types every time you pop out for a coffee or a pint – as Mark Earls says, we are herd-like animals. I love Southwark. It’s now much cooler than Soho.

"There are more agencies flocking there every month so it passes the Herdmeister test. Plus it has big landmarks – the Shard, Tate Modern, the Globe and Borough Market, which all make clients happy to venture south."

Fancy joining us on the other side? Whether you've already packed your bags for the big move or having a moment's location contemplation after paying the agency's monthly Soho rent, here's some food for thought.

The five characteristics that define a south of the river agency:

Famously known as the wrong side of the river, Londoners would historically travel south for one reason only – vice. The South Bank was a place of disrepute - home of taverns, brothels and bear baiting.

Grubby, theatrical and intimidating, the area has faced equal parts criticism and fascination over the years.

The agencies around here are no different but sometimes being looked down upon is just what we need to bring out our best.

Our latest campaign for Adidas "haters" does something South London creative agencies are used to doing, confidently and vocally standing up to those who put them down.

Two fingers to the establishment

Southwark used to be outside the City of London’s boundaries, and therefore outside the city's laws and jurisdiction. Some of that anti-establishment attitude has survived and I’d like to think that an "up yours" attitude still defines the agency culture and creative output of the area.

This new campaign from young Brixton upstarts Livity does something adland have historically shied away from: take the tobacco lobby on head on.

Let's face it, agencies aren't moving south for the shopping. They're moving here because the average house price is 25 per cent cheaper. You'll certainly find fewer glass atriums in agencies this side of the divide but in its place a mentality of smart, entrepreneurial efficiency.

We're the Lidls of the advertising world, making a little efficiency go a long way, and developing more innovative creative solutions in the process.

What do you do when you're famous for iconic poster campaigns but are marketing on a shoestring? Make one poster down the road. Just make sure it's good enough to get talked about all over Britain.

It's Big Ben vs Battersea Power Station. While north London plays home to the ruling class, south London houses industry and the populous that drive it.

So does this spell the end of the north's monopoly on creative leadership?

I deferred to Bainsfair who feels we're not quite there yet, saying, "To my mind there’s something about those sleazy crisscross Soho streets that make it one of London’s special places and still a prime location for any budding advertising agency".

And that brings me on nicely to the final south of the river characteristic.

We’re not afraid of the fight

There's nothing that gets our creative juices going better than a bit of healthy competition.

Now Ogilvy and Omnicom have evened the teams up a bit, maybe north vs south can be the next great London advertising rivalry. 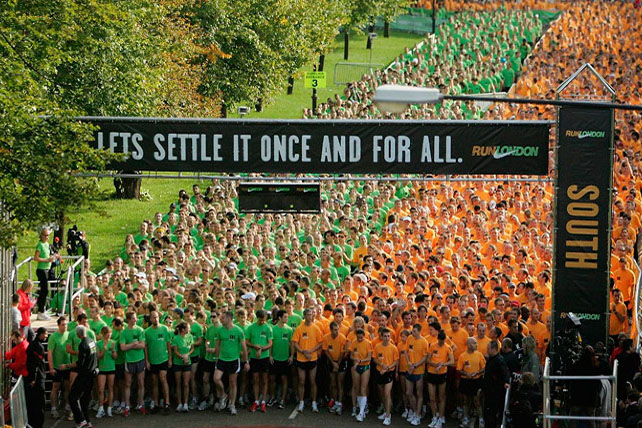 Ben Essen is the head of planning at Iris.

Pick of the week: Adidas, Iris