The London hotel's Studio Kitchen has brought its Crème Egg burger back for another year, adding the dish to its dessert menu and Spring Rocks afternoon tea offering. The slider-sized dish features a 'patty' comprising melted Crème Egg which, in a new twist, is now deep fried and battered. It sits atop mascarpone cream and jam, and the burger’s brioche bun is covered in white chocolate and raspberry sprinkles. The sliders are priced at £5.50 for two, and they are available throughout the Easter period.

The Cocktail Trading Company Brick Lane has devised the Eggsperimental Cocktail Cup for Easter. Served in an egg cup, the creation features a panna cotta-filled egg shell which patrons are invited to snack on as they sip the accompanying cocktail. The latter comprises Breakfast Brandy, peach, blood orange, fresh tarragon and sparkling wine. A Cheerio brittle is also added to complete the beverage/dish hybrid. 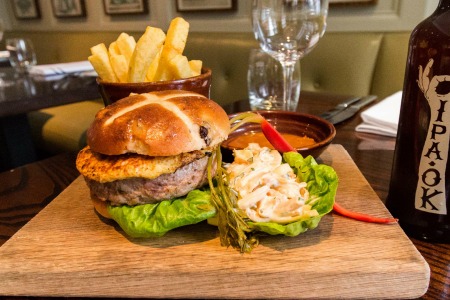 Pub and restaurant chain ETM Group has devised the Hot Cross Bunny Burger for Easter. Central to the dish is the rabbit patty, which is paired with smoked bacon, mushroom and Lincolnshire rarebit. In true Easter style, the aforementioned ingredients are served in between a freshly made hot cross bun. The burger is available at selected ETM venues from tomorrow (25 March) until 1 April.

Where: Venues throughout London

South African street food vendor Bunnychow specialises in hollowing out freshly baked loaves of bread and filling them with an array of ingredients, and it has developed a special variety for Easter. Those who visit the company's London outpost can expect to find mini brioche creations filled with dark chocolate ganache and topped with matcha green tea bread crumbs. 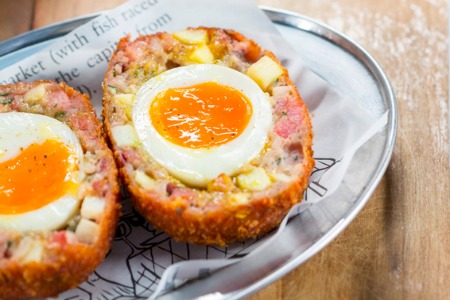 The D&D group venue’s head chef, Tim Peirson, has created a unique variation of the scotch egg for Easter. Available from 25-28 March, the smoked bacon and apple scotch egg shines the spotlight on the humble savoury egg at a time when much attention is placed on its sweet counterpart.