Fisher was appointed by the London retailer to produce the lighting and video mapping elements of the launch on Saturday (9 November). It consisted of an interactive countdown, followed by a display of Liberty snowflakes projected across the Tudor building on Great Malborough Street, which was traffic-free throughout the event.

The finale was a crescendo of colour and light, as elements from Liberty’s Christmas range burst across the building, which was draped with a visual representation of the Liberty print.

Following the visual display Liberty handed out exclusive gift-filled crackers to lucky recipients and the store remained open until 9pm. 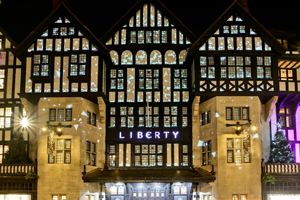 The festive lighting will remain in situ for eight weeks over the Christmas period into the New Year. It will also be making an appearance on a Channel 4 documentary called Making Liberty, which airs in December and takes a look at life at the store.

Sam Coates, project manager at Fisher Productions, said: "Fisher Productions has loved working with Liberty on this incredible project; it is such a beautiful building and the team a joy to work with.

"Fisher brought in Projection Advertising to help us with the video mapping elements and together we designed and created a visual spectacular and a really fun event that brought a smile to everyone’s faces and launched the Christmas season for Liberty."

James Murray, client services director at Projection Advertising, added: "We were hugely excited to work with Fisher to produce this modern twist on a time-honoured Christmas tradition. The Liberty brand has so many beautiful designs we were spoilt for choice, and the building itself is a great projection surface with its iconic wooden beams."

Projection Advertising gets happy with Kipling

Piggotts lights up London this Christmas