Streaming video, TV spots and outdoor ads running in the US and UK will focus on tips for curious users

In an effort to get its 1.7 million members to use the live-stream service, the social media company is kicking off a multiplatform campaign featuring tutorial-style ads that encourage users to apply the feature to share their talents, experiences and opinions with friends.

The campaign, created by Facebook’s in-house agency, The Factory, will include social vingettes, two 30-second spots for TV and social, and out-of-home ads for buses, bus shelters and digital billboards. The campaign is split into two phases. The first phase concentrates on awareness and will air this Sunday in the UK and on Monday in the US. The second phase, called "Tutorial," will launch Monday, Nov. 7.

Facebook’s CMO Gary Briggs said in a Facebook post that the campaign aims to educate and inspire people to try the new technology. "Facebook Live brings people together in real time for moments both silly and significant. It's authentic and interactive, and it helps you share your experience in the moment with people you care about," he said.

Both TV ads use videos from real Facebook Live posts shot on phones, a lot of animated emojis, and offer step-by-step instructions on how to start live streaming.

One commercial encourages users to share their "hidden talents" with the world, showcasing videos of a woman juggling, a man playing the accordion and another doing tricks with a yo-yo.

A second spot, opening with a video of an LGBTQ rally, urges users to use Facebook Live to share their opinions and experiences. "Now you are not alone," concludes the voiceover. "Your friends are there to listen."

"We designed our campaign to reflect the authenticity of Facebook Live," said Briggs. "The ads highlight all kinds of moments captured on Facebook Live: the everyday, the exciting and the quirky. Every day at Facebook we work to make the world more open and connected, and we hope this campaign helps people more easily share their experiences with others."

The out-of-home ads are customized to where they are running. For example, a bus ad details the four steps users need to follow to go live with the prompt, "How to go live when you’re not on this awesome tour bus, but still want to give an awesome tour." 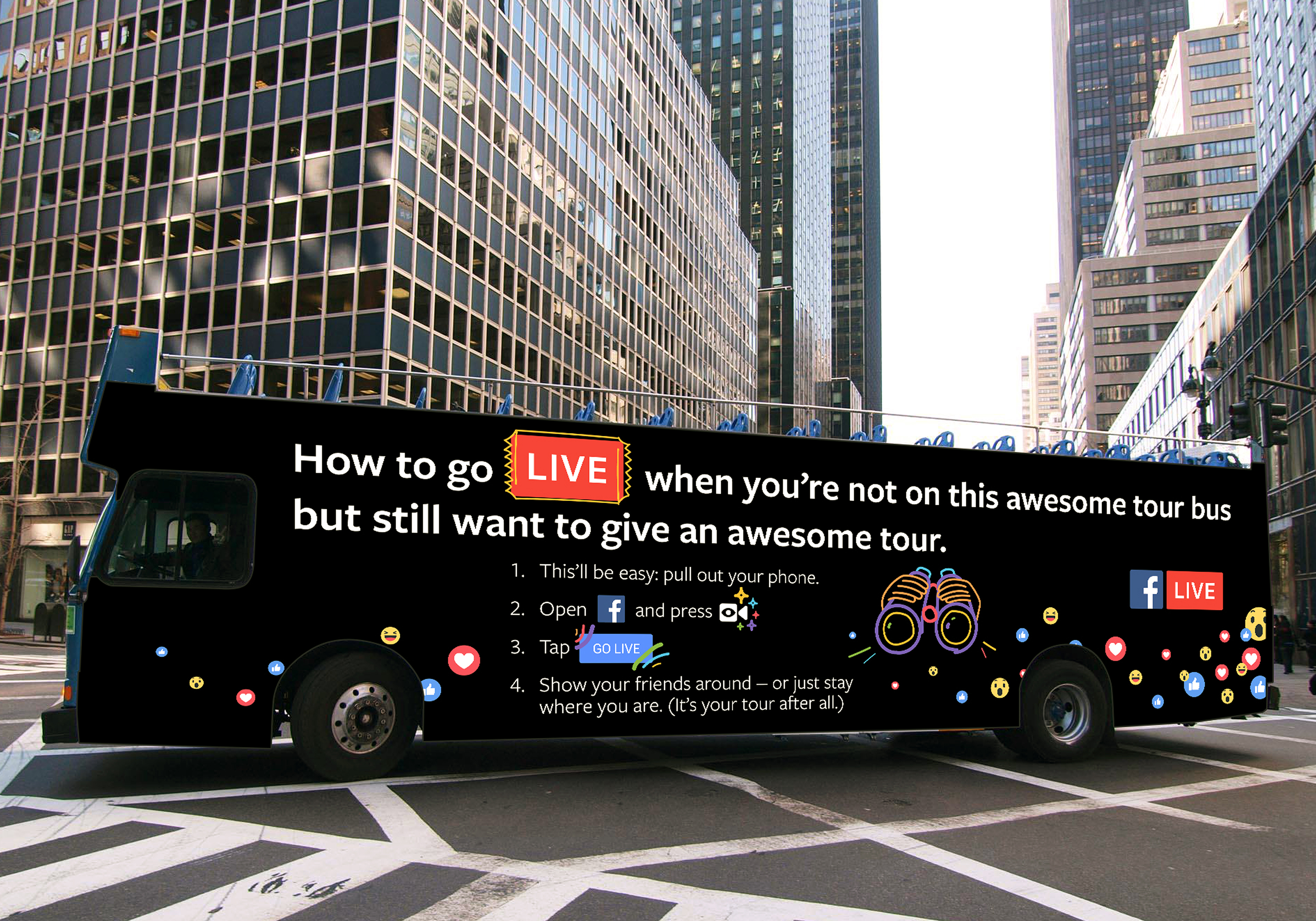 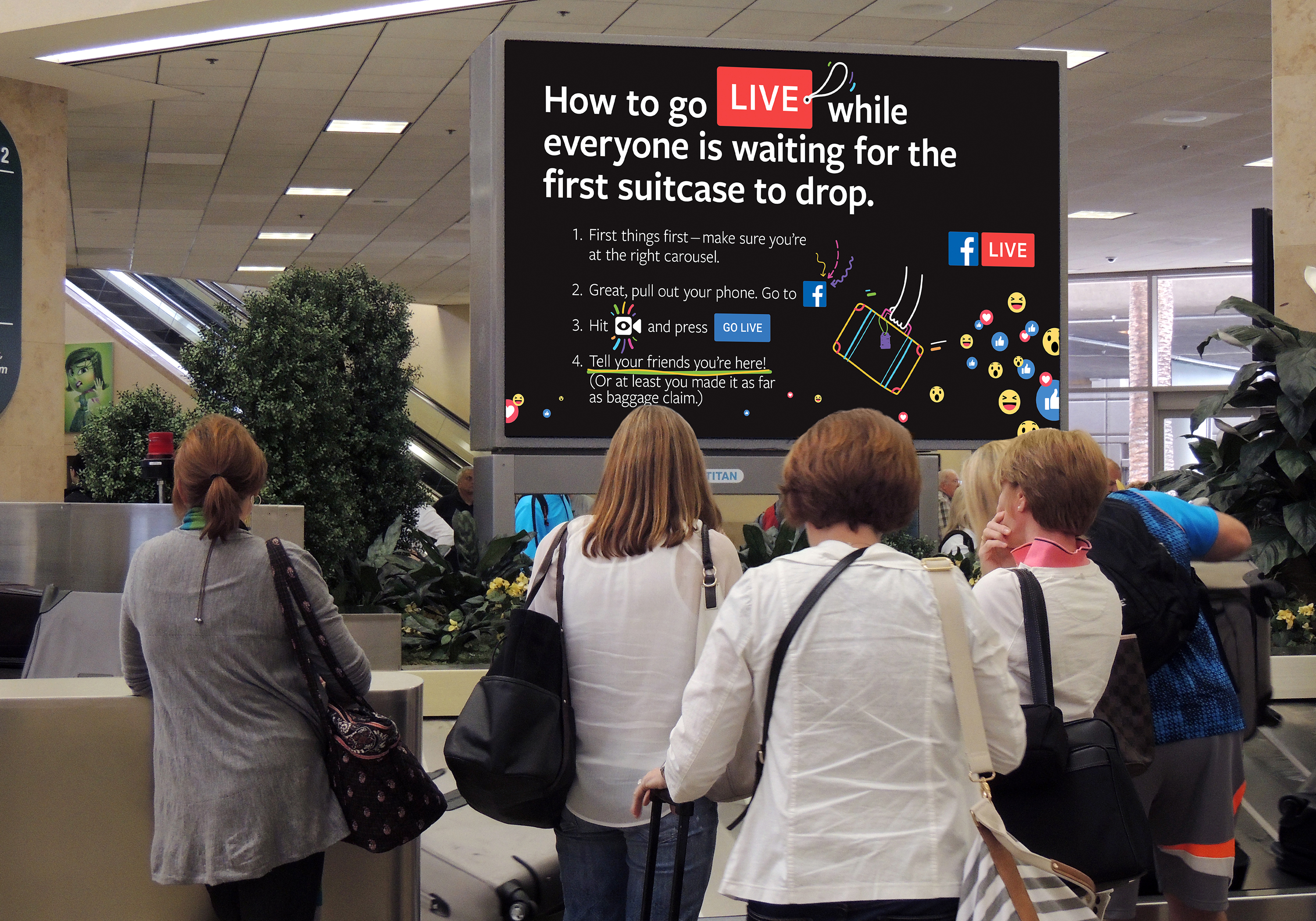 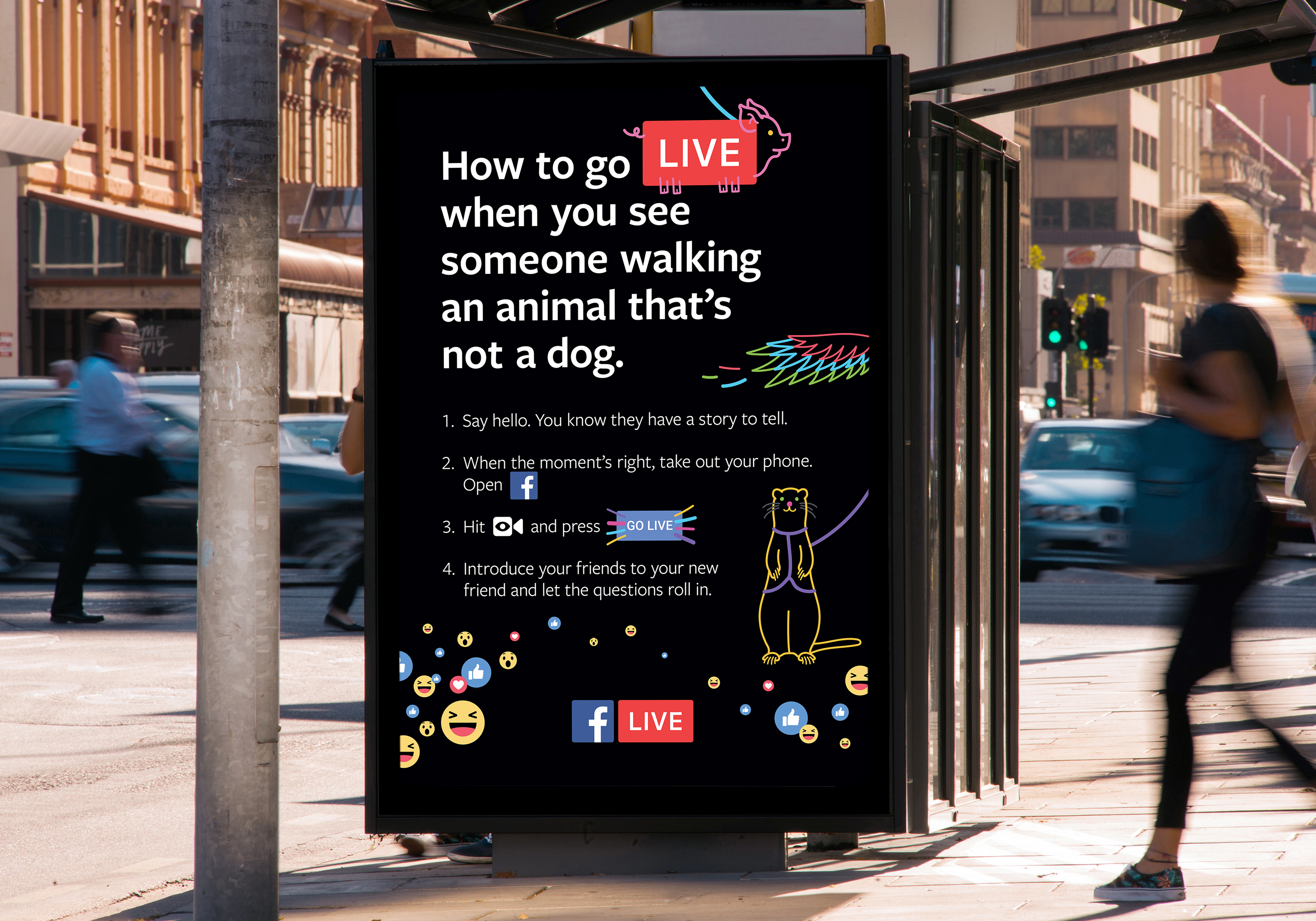 According to Briggs, since its launch last April, there have been live broadcasts from all seven continents and even from space. And since May, the number of people broadcasting live each minute has swelled to four times the original numbers of users. "We’ve seen that people comment more than 10 times more on Facebook Live videos than on regular videos," said Briggs.