A Campaign US Twitter poll reveals that people want to see lighthearted ads during this year’s broadcast.

As brands announce their Super Bowl spots for this year’s upcoming game, all eyes are on what tone they are taking after a crazy 2020.

Advertisers generally go all-out with their wildest (sometimes even inane) creative ideas and most star-studded talent during the big game.

But this year, advertisers are navigating a society in the midst of an ongoing pandemic that’s claiming thousands of lives daily. At the same time, social justice has come into searing focus after the killing of George Floyd by Minneapolis police in June.

Add that to the 2020 election, the Capitol riots and the general four-year hangover of the Trump presidency, and brands are navigating murky waters.

Several spots announced so far address the events of 2020 head on. Cointreu, nods to restaurants and hospitality workers’ struggle to remain open during the pandemic. Indeed created a job focused on the unemployment crisis. And Stella Artois is encouraging fans to savor time with loved ones.

But other brands, including Bud Light Seltzer and Tide, are sticking to a lighthearted and funny tone. And according to Twitter, that’s what folks want: to forget about the last year and take a few hours to escape from reality. 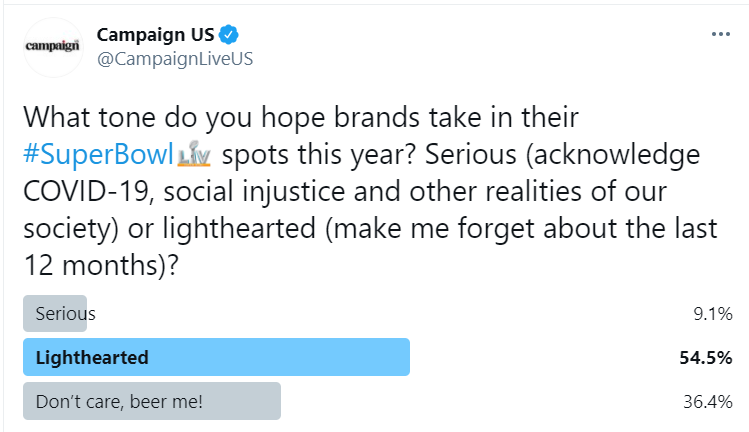