Mark Zuckerberg reveals new strategic vision for the company as it faces revenue headwinds due to Apple's tracking changes, growing competition from TikTok and fresh accusations of immoral behaviour.

Facebook's advertising revenue slowed to $28.3 billion in the third quarter of 2021, down from $28.6 billion the prior quarter, as it began to feel the pain from Apple's ad tracking shift.

The social-media giant said the change Apple made to IDFA (identifier for advertisers), which requires users to opt in to be tracked, was the "largest factor" in revenue headwinds it experienced in Q3.

Ad revenue was still up by 33% year-on-year, but this is significantly down from the 56% improvement Facebook posted in Q2 as it benefited from an increase in demand for online advertising brought about by the pandemic.

Apple hasn't shared opt-in rates, but it is expected that the vast majority of users have chosen not to be tracked across different apps.

The impact on Facebook has been two-fold, chief operating officer Sheryl Sandberg shared in an earnings call on Monday (25 October).

Firstly, the accuracy of its ad targeting has decreased, which has increased the cost of driving outcomes for advertisers. Facebook is working on developing tools and products that will allow it to show relevant ads to users while requiring minimal personal information, but Sandberg said progress in these areas "will take time".

Secondly, measurement has become more difficult. In a recent blog post, Facebook said it believed it was under-reporting iOS web conversions in aggregate by approximately 15%. It is aiming to address more than half of the under-reporting by the end of the year, Sandberg said.

These advertising headwinds pulled Facebook's total revenue down to $29 billion for the quarter ended 30 September, from $29.1 billion in the prior quarter. Sandberg said: "If it wasn't for Apple's iOS 14 changes, we would've seen positive quarter-over-quarter revenue growth."

Facebook expects fourth-quarter revenue in the range of $31.5 billion to $34 billion, reflecting the "significant uncertainty" it faces due to the continued headwinds from iOS 14.

Another factor that is slowing Facebook's growth is a "tapering off" in ecommerce, Sandberg added.

"In many places, things have opened up and people are increasingly making purchases in person," the COO said. "That doesn't mean ecommerce has stopped growing. Businesses are still making the shift to online. But ecommerce is no longer growing at the pace it was at the height of the pandemic."

Sandberg said Facebook's advertisers were also affected by the global supply-chain disruptions and labour shortages, which hurt advertising demand across a range of sectors and regions.

On a user geography basis, year-over-year ad revenue growth was strongest in rest-of-world at 50%. Europe, North America and Asia-Pacific grew 35%, 31% and 28%, respectively. 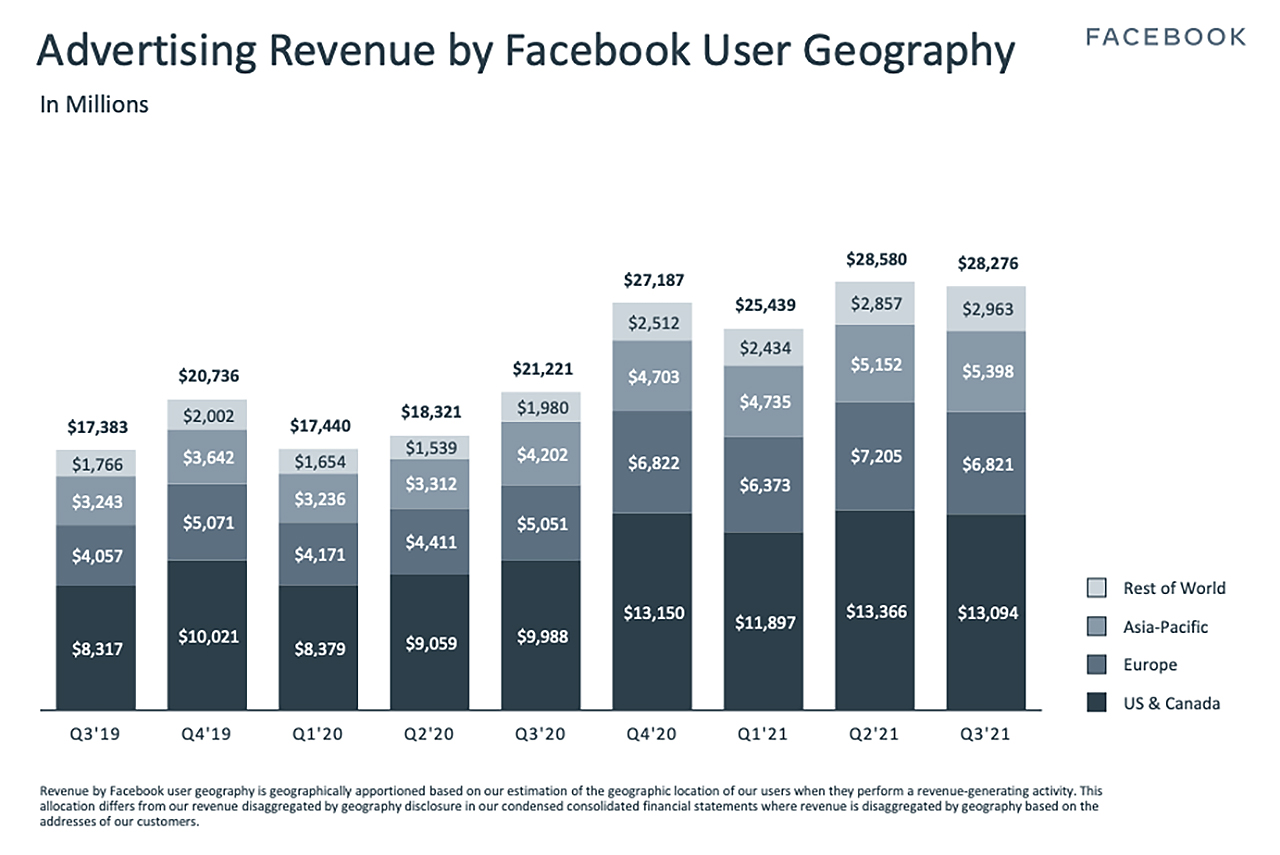 Facebook spent $3.6 billion on marketing and sales in the third quarter, up from $3.3 billion the prior quarter.

Facebook reported its Q3 earnings in the midst of another blistering attack over its failure to prevent societal harms, including its role in the spread of misinformation and hate speech, mental health and the safety of children on its platform, among other issues.

The latest alarm was raised by Facebook whistleblower Frances Haugen, who has submitted to the US Congress hundreds of internal company documents that she said demonstrate how the social-media giant prioritised "growth over safety". On Friday, a consortium of 17 US news organisations began publishing stories based on the trove of documents.

Zuckerberg delivered an unusually strong retaliation against the stories, collectively called 'The Facebook Papers', at the beginning of the earnings calls.

"Good faith criticism helps us get better, but my view is that what we are seeing is a co-ordinated effort to selectively use leaked documents to paint a false picture of our company," he told investors.

"The reality is that we have an open culture, where we encourage discussion and research about our work so we can make progress on many complex issues that are not specific to just us."

The Facebook co-founder discussed the balance it needs to strike between things such as free expression and harmful content, adding that it "makes a good soundbite to say that we don't solve these impossible tradeoffs because we're just focused on making money".

He believes social media "is not the main driver" of issues such as political polarisation, which "started rising in the US before I was born", and that it "probably can't fix them by itself either".

"The reality is these questions are not primarily about our business, but about balancing different social values," he said. "And I've repeatedly called for regulation to provide clarity because I don't think companies should be making so many of these decisions ourselves."

In the midst of growing criticism over its role in society as well as uncertainty in its ad business, Facebook is seeking its next stage of growth by pouring billions into building its version of the metaverse and catering more to young adults.

Zuckerberg revealed that the company will make "significant changes" to Instagram and Facebook in the next year with the aim of making its apps "the best services for young adults", which he defined as those aged 18 to 29. He said that over the last decade, Facebook has focused on serving everyone.

But competition has "gotten a lot more intense", he said, naming Apple's iMessage and TikTok, which he called "one of the most effective competitors that we have ever faced".

"We are retooling our teams to make serving young adults their North Star, rather than optimising for the larger number of older people," Zuckerberg said. "Like everything, this will involve tradeoffs in our product, and it will likely mean the rest of our community will grow more slowly than it otherwise would have. But it should also mean that our services become stronger for young adults."

Zuckerberg said the shift would take "years, not months" to fully execute.

Meanwhile, the company is building out its VR and AR products, a new operating system and development model, a digital commerce platform, content studios, and a social platform to fulfil its vision of being a "metaverse company".

It will start publishing the financial results of its augmented and virtual-reality labs as a separate unit "to reflect the significance of this for our business", Zuckerberg said.

In 2021, the company expects these investments to reduce its overall operating profit by approximately $10 billion.